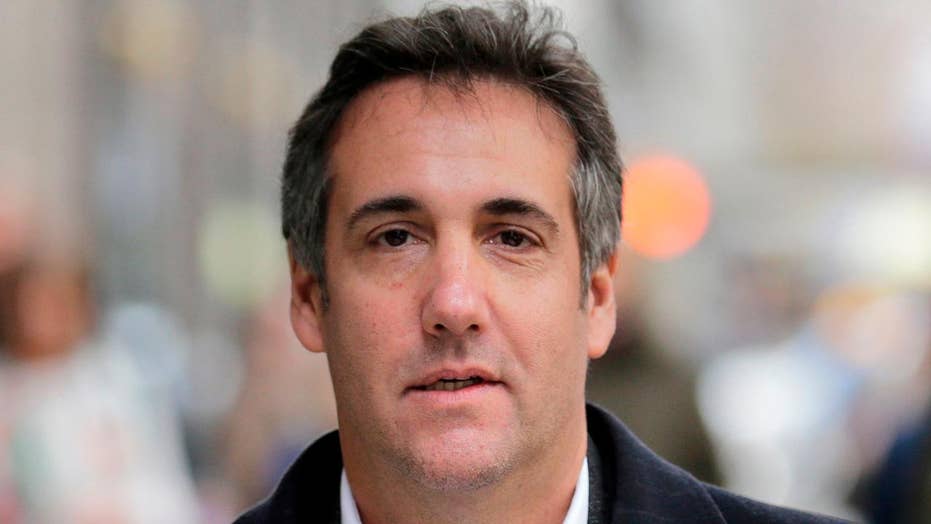 Republicans on the House Oversight Committee claimed Tuesday that Michael Cohen’s adviser Lanny Davis orchestrated the former Trump fixer's upcoming public hearing before the panel, and that Cohen was reluctant to do it.

Committee Ranking Member Jim Jordan, R-Ohio, and Rep. Mark Meadows, R-N.C., penned a letter Tuesday to Cohen’s criminal defense attorney Guy Petrillo, requesting information ahead of Cohen’s appearance slated for Feb. 7. The letter includes extensive details, apparently based on a meeting with Davis, about his purported role in setting up what has become the most highly anticipated hearing of the new Congress.

"Davis made clear that Cohen's upcoming appearance before the Committee is entirely a result of Davis's orchestration," Jordan and Meadows wrote, questioning whether it's part of a broader "media stunt" to harm the president. "According to Davis, the hearing was Davis's idea and his alone. Cohen apparently did not want to testify -- but Davis has persuaded Cohen to appear despite his concerns and fears."

The letter was sent to Petrillo after committee staff met with Davis in Washington last Friday. According to Jordan and Meadows, Davis told staff that Cohen “did not want to testify,” saying he was “fearful for his family.”

The letter said: “Davis acknowledged, ‘I pushed him to do this,’ explaining ‘this was my idea; nobody else’s.’”

The letter stated that, according to Davis, he had been working with Chairman Elijah Cummings, D-Md., for "'one or two months' on Cohen's appearance before the Committee."

"After an unspecified number of meetings and communications, Davis indicated the Chairman finally 'came around' to the idea of having a hearing," they wrote, adding that Cohen will not testify to any matter "under investigation," and Davis predicted this constraint would leave members of the committee "frustrated" and "unsatisfied." Fox News previously reported on some of those limitations.

Davis has long been a Clinton confidant, having served as a special counsel and spokesman to former President Bill Clinton. Those ties fueled accusations from Jordan and Meadows about a possible conflict of interest.

“Davis’s role as consigliere for the Clintons and those close to them raises the specter his client loyalties may be divided,” they wrote.

They also raised questions about Davis and Cohen's arrangement, noting that Cohen is “not paying Davis,” but Davis acknowledged his firm has a “representation agreement with a fee.” The Republicans said Davis would not say who was actually paying the fee, speculating about the possibility other operatives could be involved.

“If Davis is providing free media advisory or legal services, or if someone else is paying Davis’s fees, it adds to the perception that Cohen’s appearance is a media stunt initiated, produced, and financed by career Democrat political operatives as a way of scoring political points against the President,” the letter stated.

But in a statement to Fox News, Davis fired back and defended his representation of Cohen.

“I offered to brief the minority staff to show a spirit of bipartisanship, encouraged by the Chairman’s office. I offered on Mr. Cohen’s behalf for Mr. Cohen to speak with Ranking Member Rep. Jim Jordan out of courtesy and the same spirit of bipartisanship, and we have not heard back,” Davis said. “Furthermore, I am proud of my past association with President and Mrs. Clinton. There is no conflict of interest in my representation of Mr. Cohen. Beyond that, I will not dignify the unwarranted attack by Mr. Jordan as to my motives.”

Cohen hired Davis in July to represent him in the federal criminal investigation into his personal business dealings and involvement arranging hush-money payments to former Playboy model Karen McDougal and adult film star Stormy Daniels in the weeks leading up to the 2016 election in exchange for their silence about alleged sexual encounters with Trump.

In August, Cohen pleaded guilty to charges of campaign finance violations, brought as part of a grand jury probe in the Southern District of New York. Prosecutors and Cohen himself said he orchestrated payments of more than $130,000 to McDougal and Daniels at Trump’s direction.

In November, Cohen also pleaded guilty to lying to Congress about a Trump real estate project in Moscow, as part of Special Counsel Robert Mueller’s investigation into Russian meddling and potential collusion with Trump campaign associates during the 2016 election.

Cohen was ultimately sentenced to three years in prison last month by a federal judge. Cohen does not have to report to prison until March 6, allowing him to make the committee appearance.

In the run-up to that hearing, the nature of his 2016 interactions with Trump continues to be a subject of fierce debate. BuzzFeed reported last week that Trump told Cohen to lie to Congress about the Trump Tower project in Moscow -- but in a rare statement, Mueller's office disputed the accuracy of the report. Citing such "misinformation and confusion," Jordan and Meadows requested a slew of documents in preparation for the hearing, setting a Jan. 25 deadline.

Despite GOP committee members’ claims that Davis had to convince Cummings to hold the Cohen hearing, a Democratic committee aide told Fox News there is “obviously widespread interest in hearing directly from Mr. Cohen, including from some – but not all – Republicans.”

“The Committee is in the process of consulting with the Office of Special Counsel about the scope of the hearing, but the Committee will not inappropriately interfere with the ongoing criminal investigation,” the aide told Fox News.

Cohen is still slated to testify on Feb. 7.