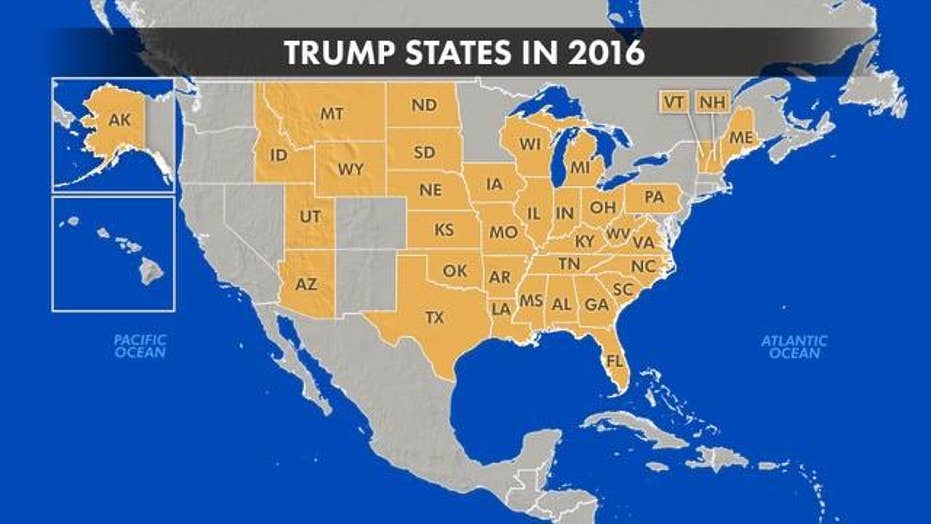 Republican candidates compete for conservative support ahead of Mississippi run-off

Republican gubernatorial candidates are battling over conservative support ahead of a Mississippi run-off. Whichever candidate wins could be the driver in determing President Trump's effectiveness in deep red territory.

JACKSON, Miss. -- In Mississippi’s GOP gubernatorial runoff, it's a battle over who can claim to be the truest conservative.

Ahead of next week's election, the candidates -- Lieutenant Governor Tate Reeves and former state Supreme Court justice Bill Waller Jr. -- are making their best efforts to tie their policies and themselves to President Trump, who remains a deeply popular force among Republicans in the state.

Mississippi is among a handful of states that are electing a governor this year, including Louisiana and Kentucky. How well the Republican nominee performs in the general election could be an indicator of how the president and his policies will be received in the deep-red states in the 2020 presidential race.

Nationally, 56 percent of Americans said they disapprove of the president’s job performance, according to a recent Fox News poll. However, Mississippi’s Republican gubernatorial run-off candidates said they would seek the president’s support in a state where Republicans hold seven of eight statewide offices.

Reeves, who missed the 50 percent mark needed in the state primary to win the nominee outright earlier this month, has tried to position himself as the purest conservative in the race whose ideas align with those of the president.

Both candidates have sparred over the best conservative approach to several issues, including improving the state’s infrastructure and education system.

But health care has been a key issue: Reeves has put up a consistent attack against his run-off opponent’s plan to tackle health care in the state.

Tate Reeves urged a room full of supporters to vote for him in the August 27th Republican run-off. He said he's the strongest conservative who can fight off Democrats' attempts to take the governorship in November. (Fox News/Charles Watson)

Waller is proposing what he calls “Medicaid reform” -- a plan that would help provide coverage to 300,000 Mississippians who either make too much to qualify for Medicaid or too little to afford private subsidized insurance plans. Waller has said his plan is like what Vice President Mike Pence implemented when he expanded Medicaid as governor of Indiana.

“They have to have small policy payments. They have a deductible,” Waller said. “So instead of going to the emergency room and getting a prescription they can’t even afford to fill and they’re back in the emergency two days later, we’ve got an option to provide them coverage.”

Waller said his proposal for “Medicaid reform” would also help save dozens of rural Mississippi hospitals that are at risk of closing because of costs they have to absorb after caring for people without coverage.

Reeves, who has proposed programs to get more doctors in rural communities to help save the state’s struggling hospitals, has categorized it as “ObamaCare expansion” that he said is too costly and unlikely to get a waiver from the White House.

“The Trump Administration is obviously suing in court to get the entire Obamacare plan thrown out,” he said. “I think it’s telling the voters something that just cannot happen.”

It has been an issue, among others, that has resonated with voters. However, some like David Phillips said his vote would probably be an Election Day decision for him and him wife, despite the "Trump factor."

Bill Waller speaks to a local gun shop owner in Mississippi. The Republican gubernatorial candidate said he has conservative plans to move the state forward and his opponent does not. (Fox News/Charles Watson)

Dr. Stephen Phillips, a political science professor at Belhaven University, said he doesn’t think there is a Trump litmus test between Waller and Reeves.

“Both are conservative Republicans. Both have supported Trump and his policies,” Phillips said. “So that’s not what really divides the two.”

Phillips believed the Republican run-off is a wide-open race for either candidate to take. However, when it comes to the general election in November, he said too much alignment with the president could fuel Democrats to go out and vote in strong numbers.

“We could see a very large Democratic turnout, probably for the governor’s race, probably considerably larger than what we have seen in the last several years,” he said.

The winner of the primary will face Democratic nominee Jim Hood, the state's attorney general.