EXCLUSIVE: Republicans are renewing their fight against “sanctuary cities,” with a new bill that aims to pull immigration funding from those jurisdictions that shield illegal immigrants from deportation – while protecting law enforcement officials who follow federal law.

The bill, introduced by House freshman Rep. Lance Gooden, R-Texas, seeks to cut off federal law enforcement grants to states that do not comply with Immigration and Customs Enforcement (ICE) detainer requests. Gooden, speaking to Fox News, said the cuts are focused and designed to sting scofflaw states without harming key enforcement priorities.

“We’re not targeting terrorism preparedness, drug enforcement or other DHS grants unrelated to immigration,” he said. “This is in no way going to disrupt law enforcement practices that are ongoing as respect to those grants.”

However, the move was hit by a series of court challenges and, of those jurisdictions, only Oregon has yet to be cleared to receive the grants from 2017, a Justice Department spokesman told The Associated Press in March.

Gooden says his bill pairs with the immigration proposal announced last week by President Trump. Trump unveiled overhauls that primarily deal with legal immigration, but this bill focuses on the fight against illegal immigration and efforts to stall immigration enforcement.

The bill has firm support from both traditional conservative groups as well as groups that advocate for stronger enforcement of U.S. immigration laws. Groups such as Heritage Foundation, the Federation for American Immigration Reform (FAIR) and NumbersUSA have come out in favor of the bill.

TRUMP, AGAIN, SAYS ILLEGAL IMMIGRANTS WILL BE 'GIVEN' TO SANCTUARY CITIES, STATES

“Sanctuary jurisdictions threaten public safety and disregard the rule of law. This important legislation would ensure that localities do not adopt these dangerous policies while still receiving financial and material support from the Department of Homeland Security,” FAIR spokesman Matthew Tragesser told Fox News in a statement. “Further, protecting cooperative jurisdictions from frivolous civil action is an important step in encouraging state and local law enforcement to honor detainer notices from federal immigration authorities.” 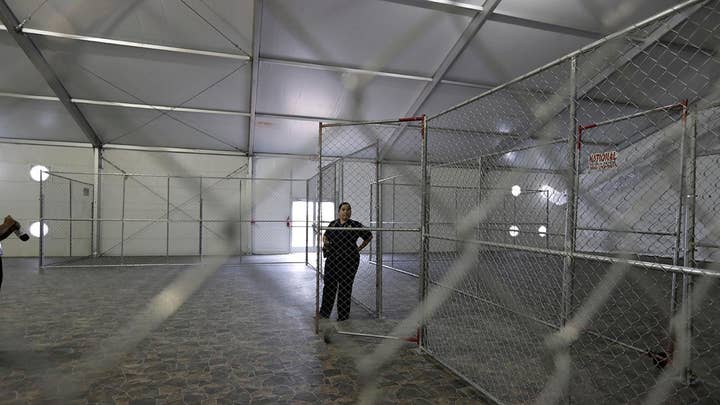 “We fully support Rep. Gooden's effort to end sanctuary cities,” NumbersUSA Deputy Director Chris Chmielenski said. “His bill is a focused and common sense approach to addressing the problem, and I'm hopeful that Democrats who support the rule of law and the safety of their constituents would join Rep. Gooden in his effort to prevent the continued release of criminal aliens and to fully allow localities to cooperate with immigration enforcement.”

Gooden’s bill may rally conservative groups, but it faces a tough climb in the Democrat-dominated House of Representatives. Amid a left-wing shift by the party as a whole, dozens of lawmakers and 2020 presidential candidates have endorsed not only sanctuary policies but abolishing ICE entirely.

Gooden was not sugar-coating the bill’s prospects in the current political climate on immigration.

However, he said that Democrats in some pro-Trump districts see there are immigration challenges to confront.

The new bill comes as the Trump administration has been considering sending detained illegal immigrants to sanctuary cities.

“Due to the fact that Democrats are unwilling to change our very dangerous immigration laws, we are indeed, as reported, giving strong considerations to placing Illegal Immigrants in Sanctuary Cities only,” Trump tweeted last month.

The idea prompted a critical response from Democrats. “The extent of this Administration’s cynicism and cruelty cannot be overstated,” House Speaker Nancy Pelosi’s spokeswoman Ashley Etienne said in a statement. “Using human beings—including little children—as pawns in their warped game to perpetuate fear and demonize immigrants is despicable, and in some cases, criminal.”

Pelosi’s district of San Francisco was among the sanctuary cities under consideration.

The Florida legislature this month passed a Republican ban on sanctuary policies in the state.