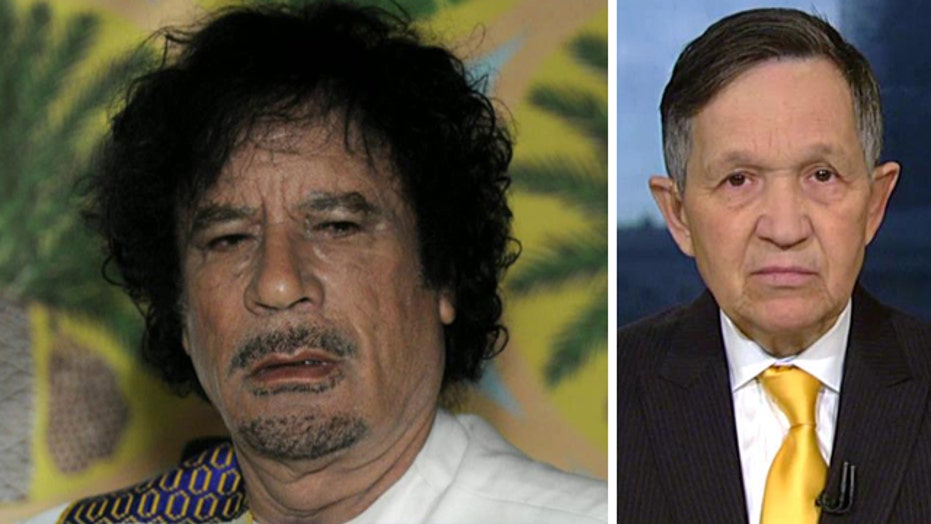 Pentagon officials were so concerned with then-Secretary of State Hillary Clinton's push in 2011 to back Libyan rebels against Muammar Qaddafi that they opened their own back-channels with Qaddafi to try and prevent the U.S. from entering the civil war, according to a report that cited newly uncovered audio tapes.

According to a report Thursday in The Washington Times, Pentagon officials used an intelligence "liaison" to communicate with Qaddafi's son and a top Libyan leader outside of White House or State Department knowledge. A senior Democratic congressman also reportedly was involved.

The conversations were secretly recorded. The Washington Times reviewed and authenticated them with the participants, according to the paper.

That unnamed intermediary, who is referred to as an intelligence "asset" working for the Pentagon, not only conducted the conversations with Qaddafi's son, but reportedly shared his concern that Clinton was unnecessarily hyping the danger of a potential genocide by the regime as a way to drag Congress into and shift public opinion in favor of an invasion.

"You should see these internal State Department reports that are produced in the State Department that go out to the Congress. They're just full of stupid, stupid facts," the U.S. intermediary reportedly told the Qaddafi regime in 2011. The paper said the liaison was "specifically dispatched by the Joint Chiefs of Staff."

Armed with a United Nations resolution, the U.S. led international bombing raids against the Qaddafi regime in March 2011, eventually aiding the rebels in ousting the longtime dictator, whom they killed.

Since the fall of the regime, insurgencies have beleaguered the struggling new government there. Weapons sent by the U.S. to the opposition have fallen into the hands of Islamist fighters, some who later helped engineer the coup in Mali, according to reports.

On Sept. 11, 2012, terrorists attacked the U.S. diplomatic compound in Benghazi, killing the top U.S. diplomat there and three other Americans. Congressional inquiries are ongoing into whether the State Department could have prevented the attacks and how it responded during and after the event.

Libya had been taken off the list of state sponsors of terrorism in 2007 after it made a number of concessions, including compensation to the families of the Pan Am Flight 103 bombing over Lockerbie, Scotland in 1988, a renunciation of terrorism, and an agreement to end its weapons of mass destruction program.

The Washington Times story suggests that the Obama administration's efforts, led by Clinton, were focused on regime change, not a negotiated settlement, during the lead-up to the war.

It suggests that son Seif Qaddafi and other leaders insisted they had no intention of conducting genocide against Libyan civilians, and had made overtures to Washington to negotiate a resolution before the bombs dropped.

The story says that the recordings indicated Clinton allegedly "ordered a general within the Pentagon to refuse to take a call with Gadhafi's son Seif and other high-level members within the regime, to help negotiate the resolution."

The liaison reportedly told a Qaddafi aide that President Obama told lawmakers that Libya "is all Secretary Clinton's matter." The asset also reportedly said the president was not getting "accurate information."

Former Rep. Dennis Kucinich, D-Ohio, a Fox News contributor, also reportedly was involved in reaching out to Seif in hopes of avoiding war, according to the report.

"I had facts that indicated America was headed once again into an intervention that was going to be disastrous," Kucinich told The Times.

The Washington Times reported that officials from the State Department and Clinton's office refused to comment.

Neither the State Department nor the Pentagon has returned requests for comment from FoxNews.com.