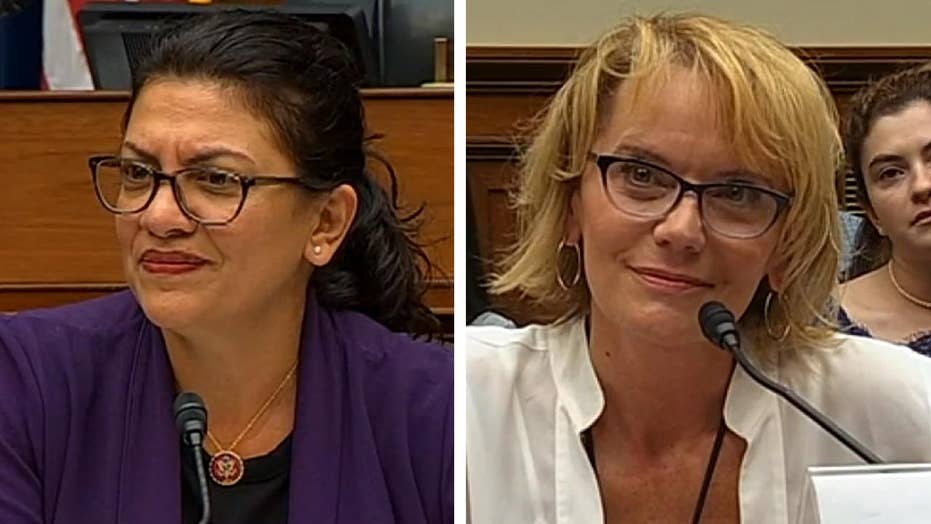 House Oversight Subcommittee on Economic and Consumer Policy holds a hearing on the use and potential dangers of e-cigarettes.

A House Oversight Committee hearing on e-cigarettes took an unusual turn Tuesday when Rep. Rashida Tlaib, D-Mich., questioned a witness’ politics and grilled her over a wink she directed at a Republican committee member.

The hearing was in response to recent instances of lung disease that have been tied to the use of e-cigarettes -- commonly known as “vaping” -- as well as a CDC warning against the use of e-cigarettes. Vicki Porter, who credits vaping for helping her quit smoking regular cigarettes, was among the witnesses, and towards the end of the hearing Tlaib asked about her personal beliefs.

“You call yourself a converted conservative and a reformed Marxist. Are you a conspiracy theorist?”

“I think my politics are entirely irrelevant to this hearing,” Porter responded.

“Oh, okay. Why were you winking at one of my colleagues on the other side of the aisle?” Tlaib asked.

“I didn’t know what the winking was, ‘cause I thought maybe there was something, like a conspiracy thing going on there. I didn’t know.”

“You think there’s a conspiracy in this hearing, Ma’am?” Porter asked.

“No, I actually think people are speaking truth here, and you can provide information,” Tlaib said, before Porter interjected.

“May I address the truth?” Porter asked.

“Well the truth to you is very different from the majority of people in this room, who do believe that children are being targeted by vaping.”

“The truth for me is I quit smoking with e-cigarettes and so did 8 million other people,” Porter said.

Tlaib took issue with that statement, firing back, “You’re still smoking,” implying that vaping and smoking are the same.

“I’m not smoking,” said Porter. “And I’m not lying under oath.” Earlier, she said that vaping likely saved her life by allowing her to break her smoking habit. She said that her lungs are healthier since she traded smoking for vaping, although she acknowledged that vaping is still “not safe.”