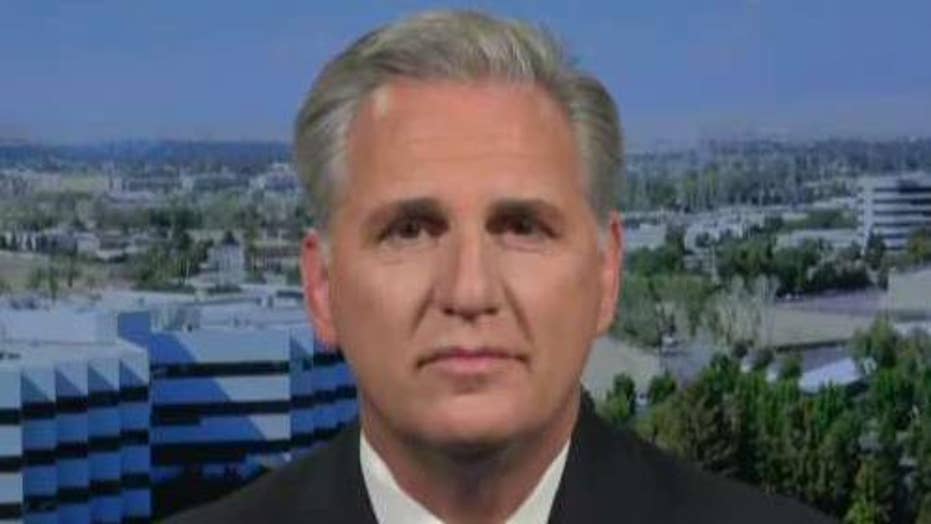 Speaking on “Sunday Morning Futures” with Maria Bartiromo, McCarthy, R-Calif., who was at Thursday’s meeting that ended abruptly with a walkout at the White House, said, “I’ve been in many of these meetings. This is a pattern of the speaker. When she doesn’t want to come to a solution she really is unbecoming of a speaker, throws a fit and leaves a room.”

The administration called in congressional leadership for the meeting, which was held against the backdrop of the fast-moving impeachment inquiry. They were set to discuss the situation in Syria after the House had just voted, 354-60, to overwhelmingly oppose the president’s announced U.S. troop withdrawal, a rare bipartisan rebuke.

The move has opened the door for a Turkish military attack on Syrian Kurds who have been aligned with the U.S. in fighting the country’s long-running war.

A Democrat familiar with the meeting, who spoke anonymously to The Associated Press, said Trump started off by bragging about his “nasty” letter to Turkish President Recep Erdoğan. In the letter, Trump warned Erdoğan not to be “slaughtering” the Kurds.

Pelosi then reportedly mentioned the House vote and Sen. Chuck Schumer, the Democratic Senate leader, started to read the president a quote from former Defense Secretary James Mattis explaining that U.S. troops need to stay in Syria to prevent a resurgence of Islamic State fighters.

The conversation between Schumer, Pelosi and Trump then escalated, with the president calling the House speaker “a third-rate politician,” according to Schumer.

The genteel Rep. Steny Hoyer of Maryland, the House Majority Leader, then interjected, “This is not useful.” Hoyer and Pelosi left the meeting and from the White House driveway, Pelosi told reporters Trump was having some kind of “meltdown.”  She told reporters they had to leave because Trump was unable to grasp the reality of the situation.

She later insisted Trump botched the insult, calling her “third-grade” rather than “third-rate.”

Later, on Twitter, Trump said Pelosi was the one who had a “total meltdown” and called her “a very sick person!” He also tweeted a picture from the room and wrote, “Nervous Nancy’s unhinged meltdown!”

On Sunday, McCarthy explained his account of what happened at the meeting to Bartiromo.

“The president starts the conversation and this is a bipartisan, bicameral meeting, and he’s handing a letter out that is a letter that he sent to the president of Turkey, Erdoğan, about not entering that area, about protecting the Kurds,” McCarthy said.

“As each elected official gathers that letter, they start to read it, they pause, it’s something they have not seen before, The speaker of the House, Nancy Pelosi, turns it over and, sitting directly across from the president, sets it right down on the table to make a point to him that she’s not going to listen to him.”

He went on to say, “And what’s really creeping in to all this is impeachment. She couldn’t put that aside for one moment to talk about the security of an issue that [we] should be one person with, that we are all speaking together with, one voice. But it was impeachment.”

McCarthy  added, “And if you watched her and Senator Schumer, they said the exact same thing over and over until they felt they were at the moment that on their own script they’re supposed to get up and walk away.”

McCarthy told Bartiromo that the other Democrats in the room at the time stayed after Pelosi left.

“We had really a productive, normal meeting,’ McCarthy said. “The only common denominator that disrupted this all was the speaker of the House.”

McCarthy also told Bartiromo he sent a letter to Pelosi with ten questions about impeachment.

“This is the process used for President Nixon and President Clinton,” MCCarthy said, explaining some of the questions he had asked.

“Do you have due process? Is the president’s attorney, counsel able to be in the room, cross examine? Are they able to bring witnesses forward? Are both sides able to have [a] subpoena process? And you know what happened? She only answered two of them.”

Pelosi announced after meeting with the House Democratic caucus on Tuesday that there will be no vote -- at least for now -- on the launch of formal impeachment proceedings against President Trump.

"There's no requirement that we have a vote, and so at this time we will not be having a vote," Pelosi said. "We're not here to call bluffs -- we're here to find the truth, to uphold the Constitution of the United States. This is not a game for us. This is deadly serious."

Despite Pelosi's claim that there was no “House precedent that the whole House vote before proceeding with an impeachment inquiry,” several previous impeachment inquiries have been launched only by a full vote of the House -- including the impeachment proceedings concerning former Presidents Andrew Johnson, Richard Nixon and Bill Clinton.

Last month, Pelosi unilaterally held a news conference announcing that impeachment proceedings were in progress. House rules do not require a vote to begin an impeachment inquiry, but it remains unclear whether the courts will agree that an impeachment inquiry has begun without such a vote. If courts do not find that a formal inquiry is in progress, they could curtail Democrats' evidence-gathering efforts.

Speaking on “Sunday Morning Futures” McCarthy said, “We’ve never taken a vote about impeachment inquiry and the reason that is so important, every American lends their voice for two years to their representative. Right now one person is having all the power, instead of the people across America actually having a say in this process.”

“And now they are actually having [House Intelligence Committee Chairman] Adam Schiff, who has lied numerous times to the American public, in charge of this process and they’re denying members of Congress from even being in the room or hearing the transcripts and reading them of what’s being said.”

He went on to say, “Adam Schiff controls who can come into the room. So members who are on the Judiciary Committee and others aren’t even allowed in the room. And members who have to vote on this come down to the committee and they can’t even read the transcripts. How is this fair?”

McCarthy said Pelosi should commit to holding a floor vote on the impeachment inquiry.

“She’s not going to bring an impeachment inquiry, something we’ve always done in the past. And remember what we‘re talking about. You’re changing the fabric of America, you’re changing what Democracy has said only because of your own political views? That is what is wrong,” McCarthy told Bartiromo.

“You want to trust Democracy and from a very important standpoint here we need due process in this. A Republican speaker made sure this process happened with President Clinton. A Democrat speaker made sure this process happened with a Republican president. So why can’t she follow the same process with what is such a serious question that’s before us? It’s because she’s letting politics play into it.”

Fox News' Gregg Re, Chad Pergram, Mike Emanuel and The Associated Press contributed to this report.