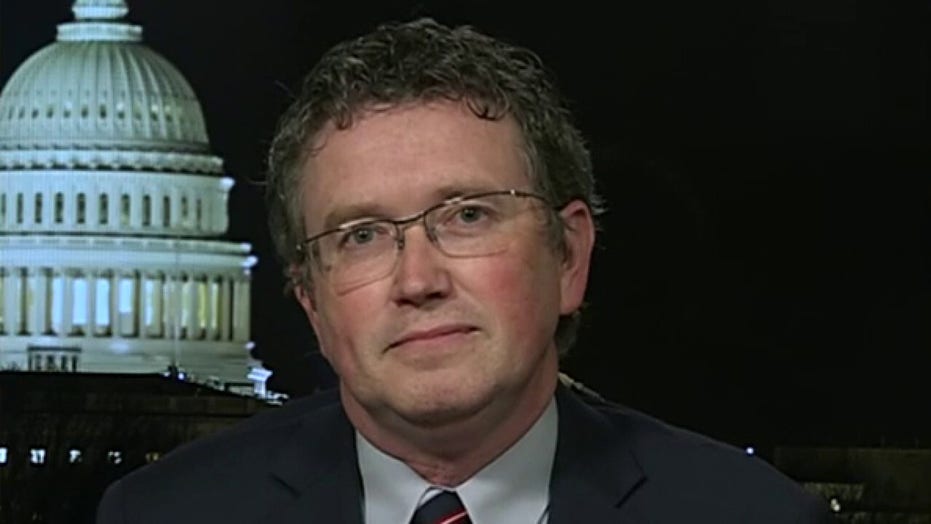 EXCLUSIVE: Rep. Thomas Massie, who attracted widespread attention as well as derision from colleagues for trying to force a recorded vote on the $2 trillion coronavirus relief bill last month, fired back at his critics in an interview Tuesday with Fox News -- saying the election season has caused certain GOP lawmakers to “abandon some of their conservative principles.”

The Kentucky Republican voiced concern over the historic price tag for rescue packages that have swept through Congress in a matter of weeks. The four bills, which largely enjoyed bipartisan support and were signed by President Trump, totaled nearly $3 trillion, and another could be under consideration. All this has prompted warnings from nonpartisan fiscal scorekeepers about a looming deficit and debt explosion.

“The last two bills have been like blood transfusions to a bleeding patient, and the problem is we haven’t stopped the bleeding yet—the patient is our economy,” he told Fox News. “What we need to do is we need to stop the bleeding. We need to get America back to work and that’s the only thing that’s going to turn everything around.

“I don’t think it colors the president’s disposition toward these bills,” Massie continued. “He never campaigned as a fiscal conservative, but a lot of my colleagues did, and I do believe the fact it is an election year has caused them to abandon some of their conservative principles.”

Massie went on to say the election year is also clouding Democrats’ decisions, noting “they want to be Santa Claus and want to give money away because it will help them get re-elected.”

But Massie acknowledged that the bills, while adding billions to the federal deficit, have been “very popular in America.”

“The problem is this bailout bill is very popular in America. We’re on a treadmill here,” he said. “Politicians generally want to be popular, and right now, the popular thing is to send as much many to as many different people as they can.”

Massie predicted that “the coming inflation” and potential food shortages and shortages of supplies, which he said could come “in weeks, not months,” could be “the only thing to get [us] off this treadmill.” 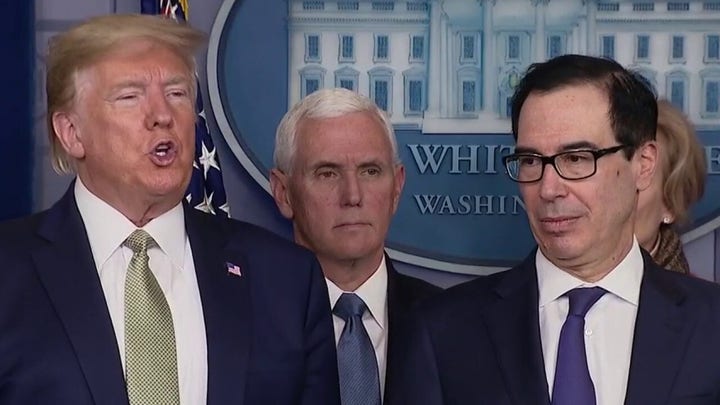 “I’m a lonely voice in trying to say this,” Massie added.

Massie was panned by colleagues on both sides of the aisle last month, when he sought a formal vote on the biggest stimulus package to date, forcing many lawmakers to return to Washington to derail his plans.

“Massie has now become the most hated person on Capitol Hill," said Rep. Peter King, R-N.Y., at the time.

The programs in question are indeed popular and seen as providing critical support. The loan and grant fund for small businesses was in such high demand that it was quickly depleted and had to be replenished last week, in a new bill worth hundreds of billions more. Many businesses see that aid as vital for their own survival at a time when social distancing measures and state lockdowns have forced them to close indefinitely. Boosted unemployment aid is helping Americans everywhere, with roughly 26 million so far seeking benefits.

But the bills have worsened an already dire fiscal picture.

The Congressional Budget Office last week projected that the federal budget deficit will hit $3.7 trillion in fiscal 2020, and that the federal debt held by the public will be 101 percent of GDP by the end of the fiscal year.

The deficit projection is more than double the $1.4 trillion budget deficit the U.S. racked up in 2009—the highest one-year federal deficit in terms of gross dollars in U.S. history.

The CBO also estimated that inflation-adjusted GDP will decline by 12 percent in the second quarter of 2020—equivalent to an annual decline of 40 percent—while unemployment rates will average close to 14 percent.

The first two coronavirus response bills were worth $200 billion, while the third, known as “Phase 3,” was worth $2.2 trillion and the most recent bill was worth nearly $500 billion.

Massie explained that his hands, as for many rank-and-file Republicans and Democrats, are tied when it comes to influencing these massive packages.

“These bills are not being written by the 435 members of Congress and the 100 senators. They are being written by a few people at the White House and leaders of the respective parties in both chambers—writing these bills, and negotiating them,” he said. “We just show up for up and down votes.”

Massie has been urging transparency and accountability, explaining why he's sought a recorded vote on each package.

“We need to make sure all elected officials are accountable so that when the popularity for these bills turns, then they can sort the wheat from the chaff at the ballot box,” Massie said.

Massie, before the $2.2 trillion “Phase 3” package passed last month, tried to force a recorded vote to get members on the record but was ultimately sidelined in that effort by congressional leadership.

The vote was taken by voice vote, which Massie said was an effort to shield members from political ramifications later.

Massie, who is a traditional small-government conservative, said that much of the economic relief payments going directly to Americans should, instead, be coming from the states.

“There’s a good argument to be made that because the government is shutting down your business, and therefore causing you to go out of business or be unemployed, that the government has an obligation to make you whole,” Massie said. “But the problem is, the state governments are the ones implementing economy-crushing policies, and it is the federal government who is paying for it.”

Massie said, for example, that it is a state function to provide unemployment, but Congress federalized the program by adding an additional $600 a week for those receiving the benefit, as part of the last stimulus package.

The Trump administration recently put out guidelines for what individuals, businesses, health care workers and more should do over three phases in reopening the economy, with states only making it to the first phase if they see a decrease in the number of cases within their borders over 14 days. The governors and local officials are responsible for deciding when to move to each phase of reopening. This has opened the door to a wide range of responses, with many northeastern states keeping restrictions in place and others like Georgia and Texas moving to re-open.

Massie predicted the next phase of stimulus legislation will “contain bailouts for the states and local governments,” even though he feels that “governors need to feel the pain of the loss of tax revenue they’ve caused.”

“The reality is, we’re being lobbied by these local governments and state governments, because those politicians have voters too,” he said. “We’re gonna end up rewarding the states for shutting down their own economies.”

Meanwhile, Massie is independently pushing legislation called the PRIME Act, which he has done for the last three Congresses, to loosen regulations to make it easier to get food from farmers to the consumers.

“I introduced the bill five years ago. Regulations from the USDA have actually made our food supply more brittle,” Massie said, noting he has bipartisan support in both chambers. “When people start getting hungry, this bill might pass.”

He added: “I’m trying to impose transparency and accountability, and get this bill passed to loosen regulations so we don’t have shortages.

“It will be weeks, not months,” Massie warned. “The first thing you’ll see is a lack of variety in the supermarket. You’ll go to the supermarket and you’ll want to buy chicken but all they’ll have is beef, you won’t go home hungry you’ll just go home thinking you live in Soviet Russia.”