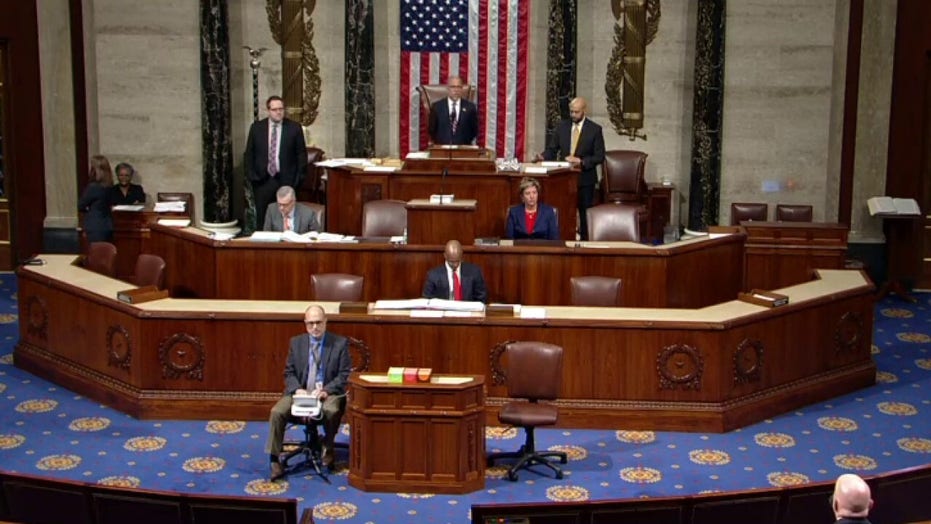 Lawmakers race back to Washington after news that Republican Rep. Thomas Massie could prevent a voice vote on the relief package; Mike Emanuel reports.

The usually outspoken champions of fiscal discipline were either muted in their concerns -- or muzzled by congressional leadership -- as the massive $2 trillion coronavirus response bill was approved by Congress on Friday.

The House of Representatives on Friday passed the costliest relief package in U.S. history, aligning with the Senate and sending the measure to President Trump's desk. The package is poised to swell the deficit and add to a national debt that exceeds $23 trillion.

The bill, despite 11th-hour drama over process, was approved on a broad, bipartisan basis. Despite concerns over certain items, lawmakers generally made the case that the economic aid is desperately needed by workers and businesses squeezed by restrictions meant to slow the outbreak's spread. From a fiscal standpoint, there were warnings that the need to prevent an economic collapse, which would also dent the deficit, outweighed all else.

A big component of the package involves federal loans as well as the Federal Reserve. It is possible that this money will be paid back, with interest. But other appropriations, including stimulus checks and extra unemployment aid and funding to states and more, do not necessarily have a funding mechanism attached to them.

The usual conservative voices in Congress have been relatively mum—with the exception of Kentucky Republican Rep. Thomas Massie and Sen. Rand Paul, who before contracting the virus himself put forth an unsuccessful amendment to offset some additional spending.

The purpose of the Paul amendment was “to rescind unobligated balances for certain international programs to offset the amounts appropriated in this bill to respond to the coronavirus outbreak.”

The amendment, though, would not take funding appropriated for global health programs and foreign operations and related programs for Israel.

A spokesman for Paul did not respond to Fox News’ request for comment.

Massie, meanwhile, put up the biggest fight, to the dismay of his colleagues on both sides of the aisle. He said Thursday that the coronavirus bill equated to "$60,000 per family of new national debt and dollar devaluation in this stimulus.”

“Not a good deal,” he tweeted.

Massie on Friday tried to force a recorded vote-- getting members on the record on the legislation--but was ultimately sidelined in that effort by Capitol Hill leaders. 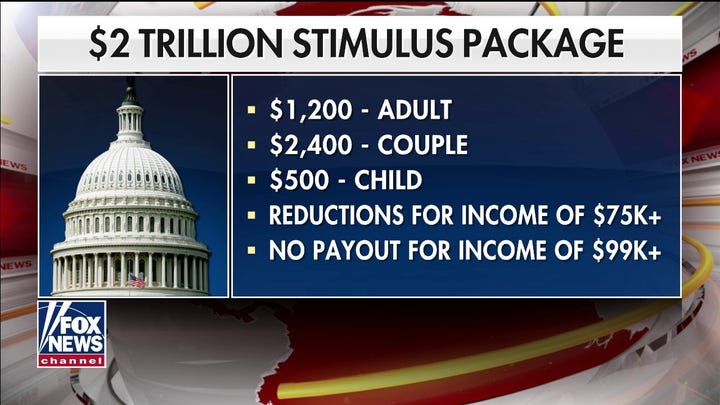 After the voice vote, Massie accused congressional leaders of trying to shield their members from the political ramifications.

"There's a big cover-up in there," Massie said as he exited the Capitol.

“It’s pretty clear now, with enough members here to pass the bill, that Pelosi and McCarthy are still working together to block a recorded vote just to insulate members of Congress from ACCOUNTABILITY,” Massie tweeted.

“Biggest spending bill in the history of mankind, and no recorded vote? #SWAMP,” he added.

"As President Trump said, we cannot let the cure be worse than the problem itself," Buck said.

But Senate Republicans, who helped to draft the legislation that was passed in the upper chamber unanimously on Wednesday, argued that there was no way to pump the brakes on spending and give the Trump administration what it needs to stabilize the economy.

Some conservative groups, like The Heritage Foundation, argued that the stimulus package should be “targeted, temporary and directed at aiding public health efforts,” but that “at the same time, any fiscal response should not increase spending permanently.”

The Heritage Foundation said that the stimulus package provides over $200 billion in special assistance to specific industries that they claim will “likely encourage political abuse.”

The group also said that firms “should be able to secure loans only in amounts that are demonstrated to be directly related to their crisis-related losses,” while saying that turning the Treasury Department into an investment bank with “unlimited discretion is a recipe for cronyism, favoritism, poor results, and taxpayer losses.”

Meanwhile, the president of the Committee for a Responsible Federal Budget, Maya MacGuineas, defended the stimulus and said the "massive debt" facing the U.S. was due to past economic decisions.

"Because of reckless spending and unpaid for tax cuts during the economic expansion, we already faced $1 trillion deficits even before this crisis. However, to stave off a depression, lawmakers had to put near-term deficit concerns aside and act fast to stabilize the economy and control a pandemic," MacGuineas said in a statement to Fox News Friday.

"This $2 trillion package was necessary, but we’re definitely on a fast track to reach unprecedented levels of debt as share of the economy, and we’ll face hard choices to get our fiscal house in order," she continued. "Once we get through this deadly pandemic and brutal recession, we will be faced with a challenging recovery complicated by our massive debt, made all the more painful by past years of excessive borrowing.”

Other groups, like Tea Party Patriots and Americans for Prosperity, complained about spending for programs like NASA and "Migration & Refugee Assistance" that was included in the bill, but were not campaigning against the bill itself.

Meanwhile, the Club For Growth said they supported a failed amendment put forth by Sen. Ben Sasse, R-Neb., which would ensure the additional unemployment benefits do not result in an individual receiving compensation worth more than their original wages.

“The federal government should not facilitate additional government dependency on anti-poverty benefit programs but instead should find ways to ensure the workforce returns to normalcy as fast as possible,” the Club for Growth said.

The 880-page coronavirus stimulus package would amount to the largest economic relief bill in the history of the U.S. for individuals, large corporations, and small businesses -- and its unanimous passage in the Senate came despite grave concerns on both sides about whether it involved too much spending, or not enough.

Meanwhile, the massive economic relief package would provide a $367 billion program for small businesses to keep making payroll while workers are forced to stay home. One of the last issues to close concerned $500 billion for guaranteed, subsidized loans to larger industries, including a fight over how generous to be with the airlines, given that Democrats wanted them to abide by new carbon emissions restrictions.

The package comes after the latest unemployment numbers were released Thursday morning, revealing that Americans filing for unemployment benefits surged to 3.28 million last week as the coronavirus pandemic forced businesses around the country to close.

But the White House said Thursday that the latest numbers are no surprise, amid the Trump administration’s coronavirus strategy.