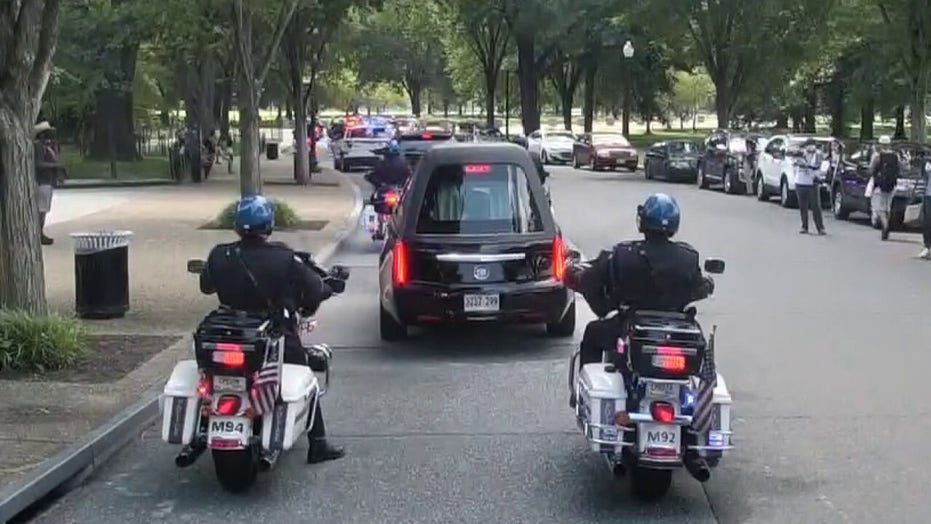 Harris Faulkner on John Lewis' journey to lie in state at US Capitol: This moment is driven by love

Lawmakers memorialized Rep. John Lewis, D-Ga., on Monday afternoon as his casket arrived at the U.S. Capitol building to lie in state on the third of six days of programs honoring the civil rights icon.

Lewis is the first African American to have the honor of lying in state in the Capitol Rotunda.

The late congressman was first transported from Montgomery, Ala., to Maryland's Joint Base Andrews for a short ceremony, before a motorcade accompanied him to the Capitol, passing by a number of landmarks along the way. The motorcade paused at various sites, including the Black Lives Matter Plaza, where Lewis made his final public appearance.

A military honor guard escorted Lewis' casket up the East Front Steps and into the Rotunda, before a ceremony preceding his casket lying in state featuring words from House Speaker Nancy Pelosi and Senate Majority Leader Mitch McConnell.

The flag-draped casket of the late Rep. John Lewis, D-Ga.,is placed on the catafalque by a joint services military honor guard, where it will lie in state, Monday, July 27, 2020 at the Capitol in Washington. (AP Photo/J. Scott Applewhite, Pool)

“All of John’s colleagues stand with his son John Miles, their family, and the entire country in thanking God that he gave our nation this hero it needed so badly," McConnell said. "May all of us that he leave behind under this dome pray for a fraction of John’s strength to keep bending that arc on toward justice.”

JOHN LEWIS' COUSIN REFLECTS ON THE LATE CONGRESSMAN: 'BEAUTIFUL SOUL AND SUCH A DYNAMIC INSPIRATION'

Lewis' casket will rest on the Lincoln catafalque -- the same platform that held the casket of the sixteenth president -- and was later repositioned at the East Front Steps. The public will be permitted to view him beginning at 6 p.m. Monday until 10 p.m. Public viewing will resume Tuesday morning. 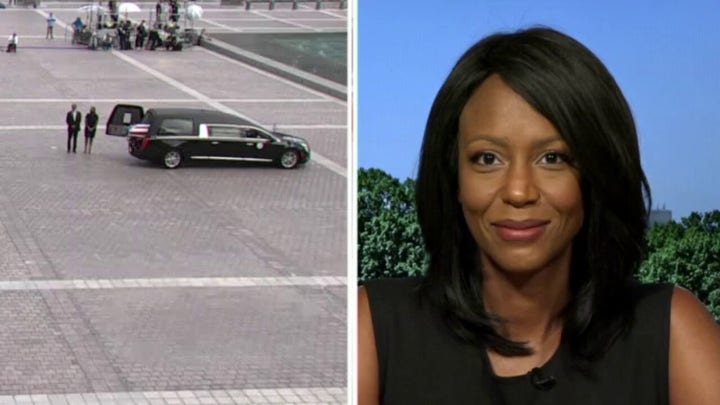 Pelosi, D-Calif., and McConnell, R-Ky., have discouraged people from traveling to Washington for this week’s events. Lewis’ family is also encouraging those who do pay their respects to wear face masks to protect against the spread of coronavirus.

The celebrations honoring Lewis began Saturday in his hometown of Troy, Ala. On Sunday, a processional accompanied him across the Edmund Pettus Bridge in Selma, where he marched in support of voting rights in 1965.

After he lies in state at the Capitol, Lewis will then be taken to the Georgia State Capitol, where he will lie in state Wednesday, before a Thursday burial.