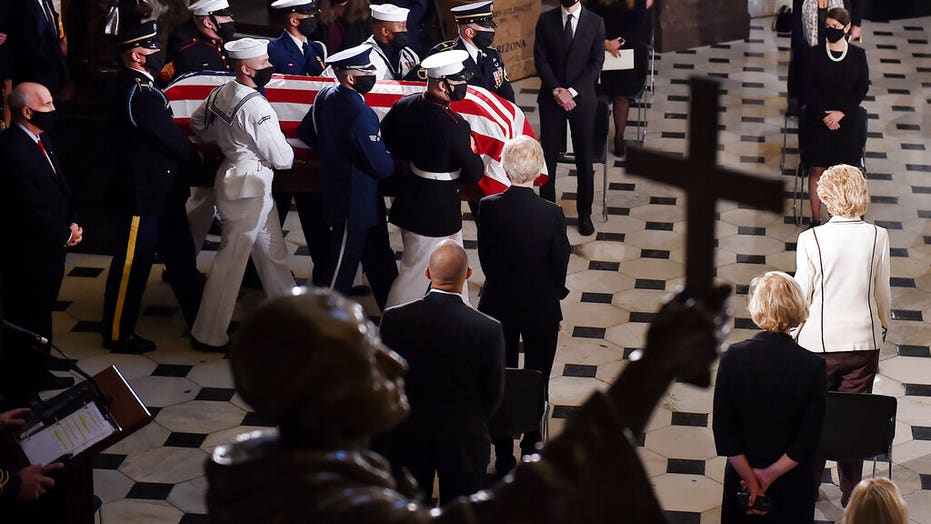 Justice Ruth Bader Ginsburg’s personal trainer picked a unique way of paying homage to the late justice at the U.S. Capitol Friday: He dropped down and did pushups next to the casket.

Lawmakers and staff visited the late justice’s casket this week as Ginsburg lies in state at the Capitol. She was the first woman to do so.

The liberal icon became famous for her strict workout routine, and throughout bouts of cancer and other illnesses, Ginsburg was known to meet with Johnson for hour-long sessions. She first began working with him in 1999, and has called him  “the most important person” in her life.

In 2017, Johnson wrote a book entitled, "The RBG Workout: How She Stays Strong...And You Can Too!"

"Even though I tend to get consumed by my work and won't let it go – that's why I work long hours into the night – when it's time to be with Bryant, everything stops and I go down to the gym," Ginsburg told USA Today in 2013.

Audible boos and jeers could be heard from protesters as the president and the first lady made their way to the Supreme Court. Some could be heard shouting, "vote him out," and "honor her wish," referring to how Ginsburg said she wanted a nomination for the next justice to be held until after next year's inauguration.