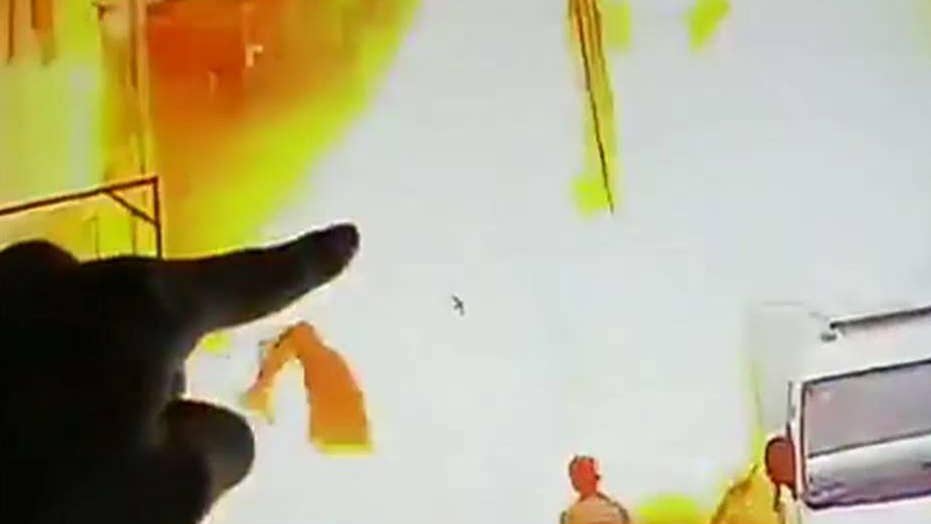 Following a closely watched White House meeting on Syria and Afghanistan, Kentucky Republican Sen. Rand Paul suggested that President Trump remains committed to pulling troops out of those countries despite a deadly terrorist attack that killed U.S. military personnel in Syria earlier in the day.

More than a dozen people, including two U.S. servicemembers -- as well as one Defense Department (DoD) civilian, and one contractor supporting the DoD -- were killed in the suicide bombing at a restaurant in the northern Syrian city of Manbij on Wednesday, and the Islamic State (ISIS) terror group claimed responsibility. U.S. officials said three servicemembers were injured in what was the deadliest assault on American troops in Syria since they entered the country in 2015.

The dead included a number of fighters with the Syrian Democratic Forces, who have fought alongside the Americans against ISIS, and the U.K.-based Syrian Observatory for Human Rights.

The development led some analysts to question whether the White House would rethink its planned full-scale withdrawal of some 2,000 troops in Syria, which Trump announced in December, along with a significant drawdown of the nearly 14,000 troops in Afghanistan.

A senior foreign diplomat told Fox News that the bombing was the "direct result of the announcement made by President Trump that U.S. forces are pulling out."

This frame grab from video provided by Hawar News, ANHA, the news agency for the semi-autonomous Kurdish areas in Syria, shows a damaged restaurant where an explosion occurred, in Manbij, Syria, Wednesday. The Britain-based Syrian Observatory for Human Rights, a Syrian war monitoring group, and a local town council said Wednesday that the explosion took place near a patrol of the U.S.-led coalition and that there are casualties. (ANHA via AP)

"I have never been prouder of President Donald Trump," Paul said in a statement after leaving the White House. "In today’s meeting, he stood up for a strong America and steadfastly opposed foreign wars. Putting America First means declaring victory in Afghanistan and Syria. President Trump is delivering on his promises.”

Earlier Wednesday, speaking at the State Department shortly after news of the attack, Pence similarly suggested that Trump's plans had not changed.

"The caliphate has crumbled, and ISIS has been defeated," Pence said. Later in the day he released a statement condemning the attack but affirming the withdrawal plan.

"As we begin to bring our troops home, the American people can be assured, for the sake of our soldiers, their families and our nation, we will never allow the remnants of ISIS to re-establish their evil and murderous caliphate -- not now, not ever," Pence said.

But some prominent Republicans encouraged Trump to reconsider his approach. Speaking at a hearing on Capitol Hill on Wednesday, South Carolina Republican Sen. Lindsey Graham, who has met with the president to discourage a hasty withdrawal from Syria, again sounded a note of caution.

"The caliphate has crumbled, and ISIS has been defeated."

“My concern by the statements made by President Trump is that you have set in motion enthusiasm by the enemy we’re fighting,” Graham said. "So I would hope the president would look long and hard of where he’s headed in Syria.”

He added: "I know people are frustrated, but we're never going to be safe here unless we are willing to help people over there who will stand up against this radical ideology."

Rep. Dan Crenshaw on attack on US troops in Syria: We don't want soldiers to die in vain

Democratic Michigan Rep. Elissa Slotkin said the attack demonstrates the lethal capability of ISIS, while "the fact that it happened in Manbij, probably the single most complicated area of Syria, demonstrates that the president clearly doesn't understand the complexity of the problem."

Manbij is the main town on the westernmost edge of Syrian territory held by the U.S.-backed Syrian Kurds, running along the border with Turkey. Mixed Kurdish-Arab Syrian forces liberated Manbij from ISIS in 2016 with help from the U.S.-led coalition. But Kurdish control of the town infuriated Turkey, which views the main U.S. Kurdish ally, the YPG militia, as "terrorists" linked to Kurdish insurgents on its own soil.

The town has been at the center of tensions in northern Syria, with the militaries of two NATO members, the U.S. and Turkey, on opposing sides. The two sides began joint patrols around Manbij in November as part of an agreement aimed at easing tensions.

Video of Wednesday's attack released by local activists and news agencies showed a restaurant that suffered extensive damage and a street covered with debris and blood. Several cars were also damaged. Another video showed a helicopter flying over the area.

A security camera showed a busy street, and then a ball of fire engulfing people and others running for cover as the blast went off.

This frame grab from video provided by Hawar News, ANHA, the news agency for the semi-autonomous Kurdish areas in Syria, shows a damaged restaurant where an explosion occurred, in Manbij, Syria, Wednesday, Jan. 16, 2019. The Britain-based Syrian Observatory for Human Rights, a Syrian war monitoring group, and a local town council said Wednesday that the explosion took place near a patrol of the U.S.-led coalition and that there are casualties. (ANHA via AP)

In a video posted late last year, Trump claimed that the U.S. had "won against ISIS" and asserted that he found it increasingly difficult to inform soldiers' loved ones that their kin had died in combat. Trump invoked slain soldiers as his primary justificaton for calling for an immediate Syrian withdrawal.

"These are great American heroes. These are great heroes of the world, because they fought for us. But they've killed ISIS, who hurts the world. And we're proud to have done it.

"And I tell you, they are up there looking down on us, and there is nobody happier or more proud of their families to put them in a position where they've done such good for so many people. So our boys -- our young women, our men -- they're all coming back, and they're coming back now. We won. And that's the way we want it."

Then, pointing to the sky, Trump concluded, "And that's the way they want it."