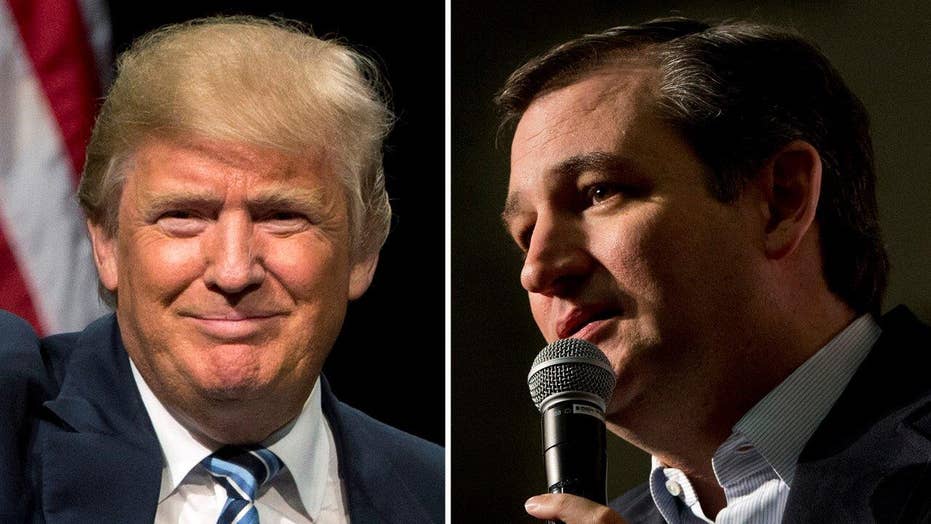 Trump-Cruz 'liar' feud heats up ahead of SC primary

In the latest Quinnipiac University national survey of likely Republican voters, Trump jumps to 39 percent of the vote, up eight points from the beginning of the month. The Texas senator, meanwhile, saw his share of the vote drop four points to 18 percent.

The big winner in the poll other than Trump is Florida Sen. Marco Rubio who held steady at 19 percent despite a setback in New Hampshire. With Cruz’s slip, that was good enough to put Rubio in second place in this poll and for the first time the Real Clear Politics average of polls.

Rubio outperforms his baseline number with college educated voters, women, younger voters, and those who identified themselves as Republicans.

The brightest spot for Rubio remains that he is broadly acceptable within his party. While 28 percent of respondents said they would never support Trump, just 13 percent said the same about Rubio. Rubio also has the highest favorability score among Republicans of 47 points. That beats Trump at 31 points and Cruz at 39 points.

There’s not much good news for former Florida Gov. Jeb Bush in the poll as he continues to float at 4 percent of the vote, tied for last place in the field of six with Ben Carson. One measurement that may explain why Bush’s candidacy failed: Just 32 percent of Republicans said he would have a good chance of defeating the Democratic nominee. An establishment candidate without an electability argument is not much of a candidate at all.

But the House of Bush has reason to celebrate. Former President George W. Bush clocked in with a favorability rating among Republicans of 59 points – 36 points higher than his younger brother.

Trump has made honesty and trustworthiness the center of his attacks on Cruz in the run up to the South Carolina primary, but neither man fares particularly well in that measurement.

Sixty-two percent of Republicans said Cruz was honest and trustworthy, and just 60 percent said the same of Trump. Rubio leads in that measurement with 72 percent, better than any candidate other than Bernie Sanders on the Democratic side.

One grain of salt to take with these polls results, however, is that Quinnipiac deviated from its usually superb practices by having this poll in the field for six days – twice as long as advisable – and polled over the holiday weekend, when it is harder to find younger, more active voters.

Trump says he’ll tone down tweets as president - The Hill: “Republican presidential candidate Donald Trump says he’d rein in his use of Twitter if elected to the White House. Speaking at a town-hall style event in Beaufort, S.C., Trump on Tuesday said he will ‘tone down’ his bombastic style on social media if he wins in November. ‘It’s a modern, great way of communicating,’ Trump said. ‘Now, we have to use it in moderation perhaps. And if you become president, it has to be toned down a lot. I fully understand that. I’m an intelligent person. I’ll tone it down a lot.’”

Rubio trolls Cruz over campaign tactics - Time: “The campaign of Marco Rubio is accusing rival Texas Sen. Ted Cruz of using ‘dishonest push-polls’ to attack their candidate, releasing a robo-call of their own to ‘alert’ voters in South Carolina to the supposed effort. The call, which will hit 500,000 South Carolina phone numbers, features Rubio surrogate and South Carolina congressman Trey Gowdy—who chairs the House Benghazi Committee—repeating a report in the Washington Post that the Cruz campaign is behind the calls. The Cruz campaign has repeatedly denied its involvement in the calls, suggesting they are being framed.”

More money lining up for Rubio stretch run - WaPo: “Texas oil investor L.E. Simmons, a Republican donor who was a national finance chairman for Mitt Romney, has signed on with Florida Sen. Marco Rubio’s presidential campaign, people familiar with his decision told The Washington Post. Simmons, who is chairman of the Houston investment firm SCF Partners, joins a growing roster of Rubio financial backers whom the senator hopes will give him a boost in what he says could be a very long Republican primary.”

WITH YOUR SECOND CUP OF COFFEE…
History: “On this day in 1972, the 15,007,034th Volkswagen Beetle comes off the assembly line, breaking a world car production record held for more than four decades by the Ford Motor Company’s iconic Model T, which was in production from 1908 and 1927. The history of the VW Beetle dates back to 1930s Germany. In 1933, Adolf Hitler became chancellor of Germany and announced he wanted to build new roads and affordable cars for the German people…In the 1950s, the Volkswagen arrived in the U.S., where the initial reception was tepid, due in part to the car’s historic Nazi connection as well as its small size and unusual rounded shape (which later led to it being dubbed the “Beetle”). In 1959, the advertising agency Doyle Dane Bernbach launched a groundbreaking campaign that promoted the car’s diminutive size as a distinct advantage to consumers, and over the next several years, VW became the top-selling auto import in the U.S.”

SUPREME COURT SHARPENS 2016 FOCUS FOR BOTH PARTIES WashEx’s David Drucker describes how the death of Antonin Scalia raised the stakes for both parties in the presidential election: “The Supreme Court always motivates the base of the Democratic and Republican parties in presidential elections. But losing Scalia, combined with the politically divided nature of the court, makes his replacement a particularly salient issue for committed GOP voters. Ditto the Democrats, who are motivated by the opportunity to tip the balance of power on the court their way.”

Obama decries GOP - NYT: “President Obama on Tuesday offered an extended critique of the Republicans running to replace him, describing them as ‘troubling’ to people around the world and singling out Donald J. Trump as someone who would not be a serious president. Speaking at a news conference in California at the end of a two-day summit meeting with leaders from Southeast Asian nations, Mr. Obama criticized the positions taken by the Republican candidates on climate change, Muslims in America and immigration.”

Hillary says GOP Supreme Court stance is racist - Daily Beast: “[In a speech in Harlem] Clinton … suggested that Republican opposition to President Obama’s plan to appoint a Supreme Court justice to take the late Antonin Scalia’s seat is predicated on the inherent racism that has made Obama the enemy for the past seven years of his administration… ‘That’s in keeping with what we’ve heard all along, isn’t it? Many Republicans talk in coded, racial language about takers and losers. They demonize President Obama and encourage the ugliest impulses of the paranoid fringe. This kind of hatred and bigotry has no place in our politics or our country.’”

Bernie on black colleges tour - The Hill: “Democratic presidential candidate Bernie Sanders sought Tuesday evening to rally black college students as he the continues efforts to make inroads with African-American voters. Speaking at historically black Morehouse College in Atlanta, Sanders focused on his plan to reform the nation’s criminal justice system and push for free college tuition. ‘We started in Georgia way, way, way down, and you know what, I think we’re going to win right here,’ Sanders said, mentioning his showing in Iowa and New Hampshire earlier this month.”

IMAGINE THE CALL WHEN THEY WATCHED ‘JURASSIC PARK’
Great Falls (Mont.) Tribune: “A Great Falls family gave their neighbors quite a scare while enjoying a favorite TV show Sunday evening. A 911 call came in at 7:28 p.m. from a neighbor who heard ‘screaming from a house about someone having a gun,’ according to Great Falls Police Department notes from the call. A second caller helped the seven responding officers locate the house on the 600 block of 8th Street North. … The call notes say the officers heard ‘loud talking’ from inside the home and observed ‘flashing lights.’ According to the notes, the officers saw two adults and several children, ages unknown, watching ‘a show about firearms’ with two windows close to the TV opened. Everyone appeared to be OK. McGraw said he later found out the show was the midseason premiere of AMC’s ‘The Walking Dead,’ an hourlong drama chronicling life during the zombie apocalypse.”