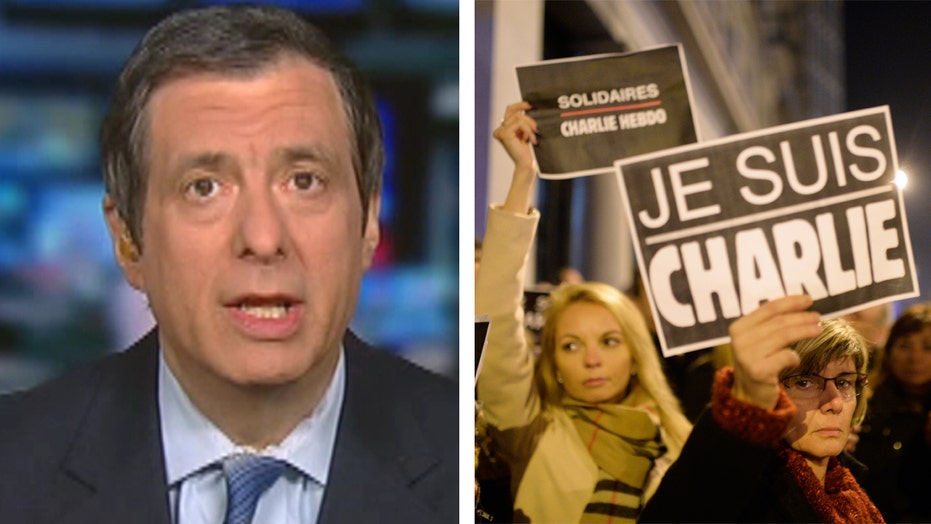 The offices of the satirical French newspaper Charlie Hebdo had already been firebombed when the editor talked about defying threats from extremists. “It might sound a bit pompous to say so,” Stephane Charbonnier told Le Monde in 2012, “but I’d rather die standing up than live on my knees.”

He was among the 12 people killed yesterday during the horrifying shooting by masked gunmen at the Paris office. But his courageous stance underscores the fact that journalism itself is once again under attack.

Charlie Hebdo has not always been popular, and that’s precisely the point. Freedom of speech means nothing if it only protects speech that is not controversial. Whether the newspaper has been needlessly provocative or not, its staffers have taken risks for what they believe in—and fanatic killers should not be able to impose some kind of Islamic death penalty for that.

In 2011, when the paper’s offices were destroyed in a firebombing after the publication of a cartoon the prophet Muhammad vowing “100 lashes if you don’t die laughing!”, Time magazine scolded Charlie Hebdo:

“Okay, so can we finally stop with the idiotic, divisive, and destructive efforts by ‘majority sections’ of Western nations to bait Muslim members with petulant, futile demonstrations that ‘they’ aren’t going to tell ‘us’ what can and can’t be done in free societies? Because not only are such Islamophobic antics futile and childish, but they also openly beg for the very violent responses from extremists their authors claim to proudly defy in the name of common good. What common good is served by creating more division and anger, and by tempting belligerent reaction?”

After a similar controversy the following year, Jay Carney, then the White House spokesman, said: “We don’t question the right of something like this to be published, we just question the judgment behind the decision to publish it.”

Charbonnier again dismissed such criticism, telling Germany’s der Spiegel: “The accusation that we are pouring oil on the flames in the current situation really gets on my nerves…And a drawing has never killed anyone.”

Satire, of course, can sting as sharply as any media commentary—especially when it comes to the sensitive subject of religion.

Several news outlets are reporting that the attackers identified themselves as being from Al Qaeda in Yemen and that they were shouting “Allahu Akbar!” Witnesses told Sky News that they also shouted, “We've avenged the honor of the prophet!"

But whatever branch of Islamic terrorism is responsible for this heinous crime, the targeting of the French paper is no accident.

On yesterday’s cover was a caricature of a controversial novelist, Michel Houellebecq, whose book “Submission” forecasts a France run in the future by Muslims and where polygamy is practiced. And the last tweet posted by the magazine was a mocking spoof of ISIS leader Abu Bakr al-Baghdadi.

The vicious attack would be shocking news even if the target was an insurance company office. But by singling out a media enterprise—especially one that has dared to poke fun at Islam—the terrorists are sending an even louder message, one designed to frighten and intimidate.

We saw the same evil calculation in the decision by ISIS to kill journalists James Foley and Steve Sotloff and circulate video of their beheadings. This was a way to amplify the propaganda value of such executions and generate even more coverage by journalists who felt an instinctive kinship to their fallen brethren.

That ploy worked as ISIS sparked weeks of anguished coverage around the globe, and the images of the soon-to-be-murdered journalists, published far too often in my view, became the face of Islamic terror. After that, even as the U.S. and its allies struck back at ISIS in Iraq and Syria, the coverage greatly receded. Terrorists understand the media’s need to personalize a tragic story.

Yesterday’s attack was also a far bloodier version of the Sony Pictures hacking, aimed at paralyzing and humiliating a media company over its ill-advised film that depicted North Korean strongman Kim Jong-un’s head being blown up. That act of cyberterrorism also served as a warning to other media outfits that might take on North Korea.

Charlie Hebdo specialized in skewering sacred cows. “Its pages are filled with vulgar caricatures and caustic humor, lampooning politicians, entertainers and media personalities of all stripes,” the New York Times reported three years ago, “and the newspaper has found itself a frequent presence at Paris courts, accused on several dozen occasions of defamation or inciting hate.

“The world’s religions have also been favorite targets of the paper, this being France, where state-mandated secularism is a sort of religion of its own. The cover page of one recent issue featured a cartoon of three rolls of toilet paper, labeled Bible, Koran and Torah, and the headline: ‘In the toilet, all the religions.’”

The danger now is that journalists around the world will engage in self-censorship, that they will pull back on aggressive reporting and analysis of Islamic terrorism. For every potentially provocative article, headline or cartoon, some will ask themselves, is this worth the risk? Wouldn’t it be easier, safer, to let this one go?

And each time that happens, the gunmen who unleashed a hail of bullets in a Paris newspaper office will have won.