Former President Thomas Jefferson's hometown of Charlottesville, Va. was wrong to scrap its commemoration of the Founding Father's birthday, according to a western philosophy professor.

Jason Hill claimed on "Tucker Carlson Tonight" Wednesday that Jefferson was a flawed man, as evidenced by his ownership of slaves, but also left a legacy of enormous contributions to America.

THOMAS JEFFERSON'S HOMETOWN OF CHARLOTTESVILLE, VA WILL NO LONGER MARK HIS BIRTHDAY: REPORT

"I think this was a great man that helped found this country," said Hill, a professor at DePaul University in Chicago. "If we start by retroactively looking at the sins of great figures who have made enormous contributions to western philosophy, we are going to be left with a decimated history."

Hill called slavery a "birth defect" of the United States but added the man who situated his Monticello estate just south of Charlottesville also helped create a legacy that freed people from its bonds. 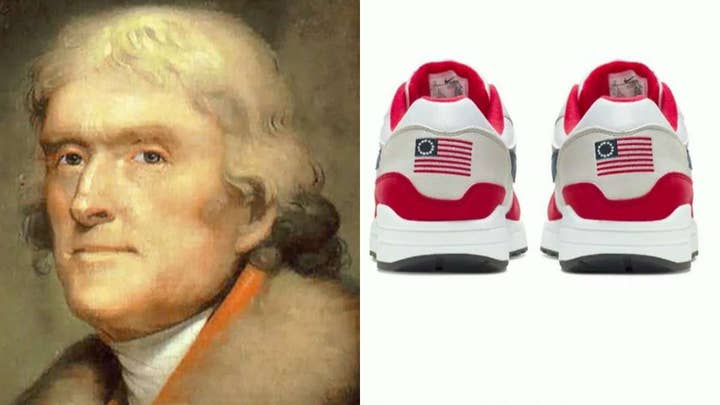 "We must also remember some of the people who were bigots in their times bequeathed to us the legacy of tradition, that gave us the emancipatory vocabulary to free ourselves from those bonds," he said. "Thomas Jefferson was one such man as well as the rest of the Founding Fathers themselves."

Jefferson was born on April 13, 1743, in neighboring Shadwell, Va. He went on to draft the Declaration of Independence, found the University of Virginia in Charlottesville, and serve as the third president of the United States. He died on July 4, 1826, the same day as fellow Founding Father and political rival John Adams.

Charlottesville city officials voted to scrap the holiday honoring Jefferson in favor of Liberation and Freedom Day, to be celebrated each March 3. The holiday commemorates the anniversary of Union forces arriving in Virginia near the end of the Civil War in 1865, the Washington Times reported.

The vote to end the Jefferson holiday is just the latest of several setbacks for the Founding Father's legacy in recent months.

In March, some students at Hofstra University in Hempstead, N.Y. called for the removal of a Jefferson statue from the campus, claiming he represented racism and slavery.