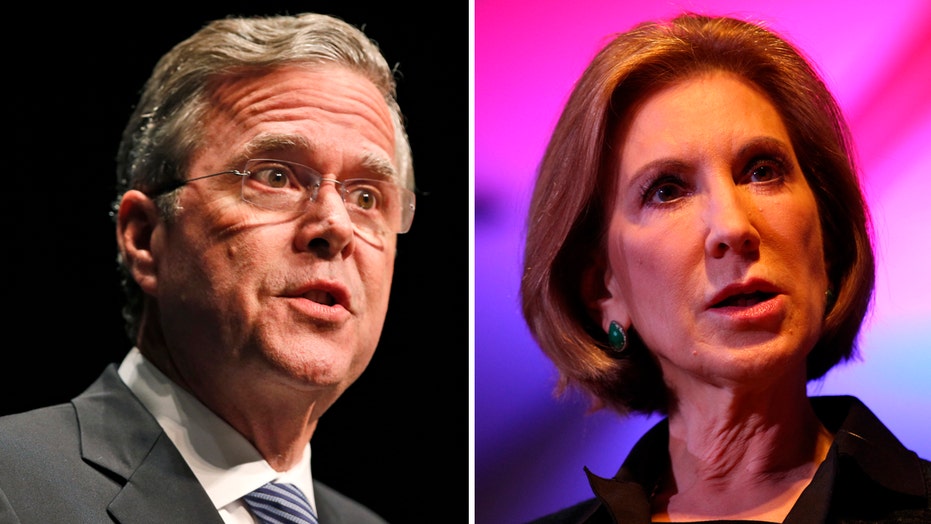 Stakes are high for Bush, Fiorina

Strategy Room: Joe Lestingi and David Avella break down what to watch in third GOP debate

Now it gets interesting.

As Donald Trump -- not one accustomed to sharing the top slot -- suddenly faces a co-front-runner in Ben Carson in the Republican presidential race, the pressure is heavy on middle-of-the-pack candidates like Jeb Bush and Carly Fiorina to shine as they enter their third primary debate Wednesday night.

As before, the 10 top-polling candidates will be on stage for the main event. But the face-off in Boulder, Colo., could offer a different kind of dynamic. Aside from an expectation that Trump will play hardball with the conflict-averse Carson, analysts say other candidates will have to make their move.

Bush, the former Florida governor, enters the debate at a particularly volatile time for his campaign. He recently slashed his campaign budget, and earlier this week held a private meeting with donors to offer reassurances and lay out the new strategy -- which appears to involve, in part, training attacks on fellow Floridian Marco Rubio, who is rising above Bush in the polls.

"[Donors are] going to be looking at Bush not only for his substance but his attitude," The Washington Examiner's Byron York told Fox News on Wednesday.

Bush has slipped to fourth place in an average of national polls, according to RealClearPolitics.

At the same time, Bush and particularly the super PAC supporting him have the resources to remain in the race for a while, analysts say. The question is whether he can recapture momentum.

"Bush actually has the money, the capacity to be there in the end," Democratic strategist Joe Trippi said.

Fiorina, though, did not start the campaign with Bush-level resources, and faces the challenge of translating her typically strong debate performances into sustained polling support.

The businesswoman successfully fought her way onto the main-stage event at the second GOP debate, and enjoyed a spike in the polls after some stand-out moments.

But her support since late September has slipped, increasing pressure to reinvigorate voters Wednesday night.

The CNBC-hosted debate is set for shortly after 8 p.m. ET in Boulder, Colo. It will be preceded by an undercard debate with lower-polling candidates at 6 p.m. ET.

Even as other candidates try to elbow their way into the fray, though, don't expect Trump to give ground.

At an Iowa rally Tuesday night, the billionaire businessman joked feistily with the crowd about his slipping Iowa numbers -- not to mention a new survey showing Carson leading him nationally.

"What the hell are you people doing to me?!" Trump asked the crowd.

At the same time, he vowed to spend more time and energy in Iowa to fight his way back to the top.

"In all fairness ... what is my competition?" Trump asked.

So far, the real estate mogul and reality TV star has forgone paid advertising and traditional small-scale campaign events, where candidates interact with voters in the early voting states, for massive rallies in arenas and auditoriums. At nearly every one, Trump begins his speech by recounting his place in the latest polls, reciting one number after the next with the help of hand-written notes.

Until recently, Trump held a lead nationally and in the early primary states in preference polls. But recent surveys have shown retired neurosurgeon Carson nabbing an advantage over Trump in Iowa. A poll released this week by CBS News and The New York Times also showed Carson catching up to Trump nationally.

Trump has, in turn, moved on from repeatedly needling Bush to poking at Carson. Appearing baffled by Carson's rise, he's told audiences that he just doesn't understand the soft-spoken conservative's appeal.

He also raised questions about Carson's religious faith and has started to highlight what he says are contradictions in his record and policy positions.

"Really, this is a poll of leaners and undecided," he said.