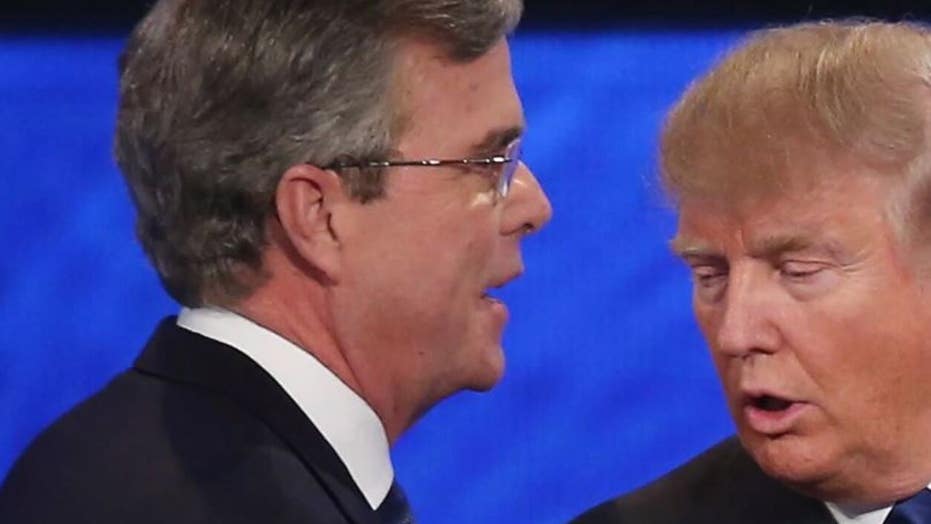 The Democratic primary debates of the 2020 presidential election are heating up.

The primary debate stage can provide a candidate with the political home run they need to grab the attention of American voters. Some standout debate moments can be humorous, contentious or even embarrassing for candidates.

FIRST 2020 DEMOCRATIC DEBATES TIME, PLACE, CANDIDATES AND EVERYTHING ELSE TO KNOW

As the road to 2020 heats up, here are some of the most memorable moments from past primary debates — including those involving Ronald Reagan, Donald Trump, the Clintons and Joe Biden.

Then-California Gov. Ronald Reagan used his own campaign money to finance the 1980 Republican primary debate in New Hampshire after the Federal Election Committee ruled that a newspaper-sponsored debate by the Nashua Telegraph didn’t comply with election regulations.

When the moderator asked that Reagan’s microphone be turned off as the former actor tried to make an introductory statement, Reagan got fired-up.

"Is this on?" he said, standing up and tapping the microphone.

"Mr. Green, you asked me if you would ... I am paying for this microphone, Mr. Green!" a furious Reagan said. The crowd erupted in sustained applause at the remark.

In the 2008 Democratic primary, Hillary Clinton was asked what she would say to voters who viewed then-Senator Barack Obama as more “likable.”

A humored Clinton agreed that Obama was “very likable.” As she tried to answer, Obama interjected, “You’re likable enough, Hillary,” eliciting giggles from the crowd.

During a Republican primary for the 2012 nomination, then-Texas Gov. Rick Perry was naming which three government agencies he’d eliminate. He named the first two, Education and Commerce, before stumbling to remember the third.

He jokingly named the Environmental Protection Agency (EPA) at the suggestion of then-Texas Congressman Ron Paul while the audience, and Perry himself, broke out laughing. When asked if he was serious about the EPA, Perry said no and tried to name the three agencies again — but came up empty.

When then-Colorado Sen. Gary Hart suggested during a 1984 Democratic primary debate that he had a lot of new ideas, Walter Mondale refuted his statement with a still-famous line from a Wendy’s commercial.

“When I hear your new ideas I’m reminded of that ad, ‘Where’s the beef?’” Mondale said.

The slogan originated from the fast-food chain’s commercial in which an elderly woman repeatedly asked about her hamburger filling.

Bernie Sanders says no one cares about Hillary Clinton's emails

During a 2016 Democratic primary, Sen. Bernie Sanders, I-Vt., took a moment to “say something that may not be great politics” and addressed the much-discussed Hillary Clinton emails which were deleted from a private server and potentially placed classified government information at risk.

Sanders turned to Clinton and said: “The American people are sick and tired of hearing about your damn emails!” He then called on the media to “talk about the real issues facing America.”

As the crowd cheered Sanders, Clinton thanked the senator and the two shook hands.

Newt Gingrich set off fireworks at a 2012 Republican primary in South Carolina when moderator and CNN news anchor John King asked the former House Speaker to address a recent report claiming Gingrich had asked his ex-wife for an “open marriage.”

When King asked if he would like time to respond to the question, an angry Gingrich replied: "No, but I will," to cheers and applause from the audience.

"The destructive, vicious, negative nature of much of the news media makes it harder to govern this country, harder to attract decent people to run for public office, and I am appalled that you would begin a presidential debate on a topic like that," he replied.

Gingrich went on to win the primary vote in South Carolina but ultimately lost the nomination.

Bill Clinton and Jerry Brown get heated over Hillary Clinton

Brown alleged the Arkansas law firm Hillary Clinton was a part of was doing business with the state, calling the situation a “conflict of interest,” “corruption” and "a scandal of major proportion."

"He is funneling money to his wife's law firm for state business,” Brown alleged, citing a front-page article in that day’s issue of The Washington Post.

Clinton shot back, saying: “You ought to be ashamed of yourself for jumping on my wife. You're not worth being on the same platform as my wife. I never funneled any money to my wife's law firm. Never."

Donald Trump and Jeb Bush, scion of the Bush dynasty, had a heated exchange on the primary debate stage in Las Vegas as they fought for the GOP 2016 presidential nomination.

"So far I'm doing better," Trump said. "You know, you started off over here (near the center of the debate stage), you're moving over further and further. Pretty soon you're going to be off the end."

Former Vice President Joe Biden first ran for president in the 1988 election. Following a Democratic primary debate at the Iowa State Fair, it was reported that the then-Delaware senator plagiarized a speech made by Neil Kinnock, the British Labor Party leader.

The incident was recorded on video and circulated side-by-side with a commercial of Kinnock.

The fallout from not properly sourcing his speech at the debate effectively ended his campaign.