Secretary of State Mike Pompeo on Wednesday officially declared that Hong Kong is no longer autonomous from China, days after Beijing moved to impose new national security legislation on the territory.

“Beijing’s disastrous decision is only the latest in a series of actions that fundamentally undermine Hong Kong’s autonomy and freedoms and China’s own promises to the Hong Kong people under the Sino-British Joint Declaration, a U.N.-filed international treaty,” Pompeo said in a statement.

Chinese government officials, citing national security, announced that the National People’s Congress (NPC) will review legislation that would criminalize anti-government movements, like the recent years-long pro-democracy protests. Pro-democracy advocates say that such a move goes against the "one country, two systems" framework that promises freedoms to residents in Hong Kong not available to Chinese citizens in the mainland.

It's one in a series of incursions by Beijing onto the liberties enjoyed in Hong Kong, that were agreed to continue after Hong Kong was handed over from the British in 1997, before which it was a British colony.

The State Department is required to assess the territory’s autonomy from China, and that on Wednesday Pompeo certified to Congress that Hong Kong “does not continue to warrant treatment under United States laws in the same manner as U.S. laws were applied to Hong Kong before July 1997.” 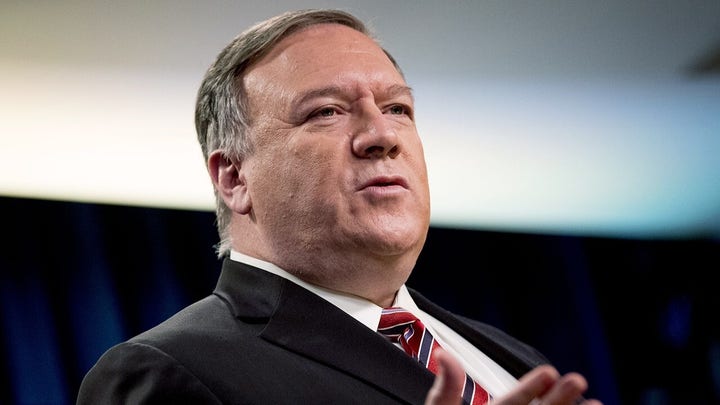 “No reasonable person can assert today that Hong Kong maintains a high degree of autonomy from China, given facts on the ground,” he said.

Pompeo later tweeted that “Hong Kong is no longer autonomous from China, given facts on the ground.”

The U.S. move is a significant shot at Beijing as it the U.S. is arguing that China's actions will make it impossible for Hong Kong to enjoy its status as a key financial hub. Administration officials are not hopeful that the statement from Pompeo will cause China to back off its actions in Hong Kong – and fear that “Hong Kong may be lost”

Both the State Department and the White House had objected to the proposed law. White House officials said on Tuesday that President Trump is "displeased" with the efforts from China -- coming amid growing tension between the U.S. and China over its botched handling of the initial outbreak of the coronavirus.