Secretary of State Mike Pompeo reiterated on Sunday President Trump’s claim that Iran was behind last week’s attacks on oil tankers near the strategic Strait of Hormuz and that the United States is ready to take action if necessary.

Pompeo said that Washington does not want to go into an armed conflict with Tehran, but hoped that the threats of force will be enough to draw Iranian leaders to the negotiating table.

“These were attacks by The Islamic Republic of Iran on commercial shipping, on the freedom of navigation, with a clear intent to deny transit through the strait,” Pompeo said in an interview on “Fox News Sunday.” “There's no doubt. The intelligence community has lots of data, lots of evidence -- the world will come to see much of it.”

Pompeo added: “We don't want war. We've done what we can to deter this. The Iranians should understand very clearly that we will continue to take actions that deter Iran from engaging in this kind of behavior.”

By pointing the finger at Iran, Trump was keeping a public spotlight on an adversary he accuses of terrorism but also has invited to negotiate. The approach is similar to his diplomacy with North Korea, which has quieted talk of war, but not yet achieved his goal of nuclear disarmament. Iran has shown little sign of backing down, creating uncertainty about how far the Trump administration can go with its campaign of increasing pressure through sanctions.

Iran denied any involvement in the attacks and accused Washington of waging an "Iranophobic campaign" of economic warfare. 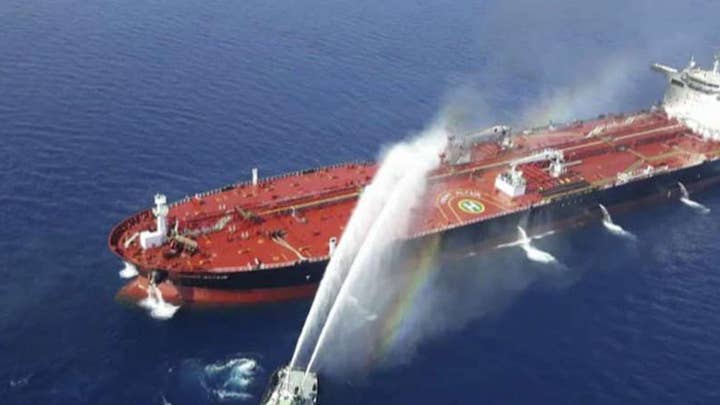 Trump last year withdrew the United States from an international agreement to limit Iran's nuclear program that was signed in 2015 under his predecessor, President Barack Obama. He has since then re-instated economic sanctions aimed at compelling the Iranians to return to the negotiating table. Last month, the U.S. ended waivers that allowed some countries to continue buying Iranian oil, a move that is starving Iran of oil income and that coincided with what U.S. officials called a surge in intelligence pointing to Iranian preparations for attacks against U.S. forces and interests in the Gulf region.

In response to those intelligence warnings, the U.S. on May 5 announced it was accelerating the deployment of the USS Abraham Lincoln aircraft carrier battle group to the Gulf region. It also sent four nuclear-capable B-52 bombers to Qatar and has beefed up its defenses in the region by deploying more Patriot air defense systems.

Officials said that Pentagon deliberations about possibly sending more military resources to the region, including more Patriot missile batteries, could be accelerated by Thursday's dramatic attack on the oil tankers.

Pompeo called on the international community to ramp up pressure on Iran, but said the U.S. reserves the right to take matters into its own hands to ensure safe passage for ships heading through the Strait of Hormuz. 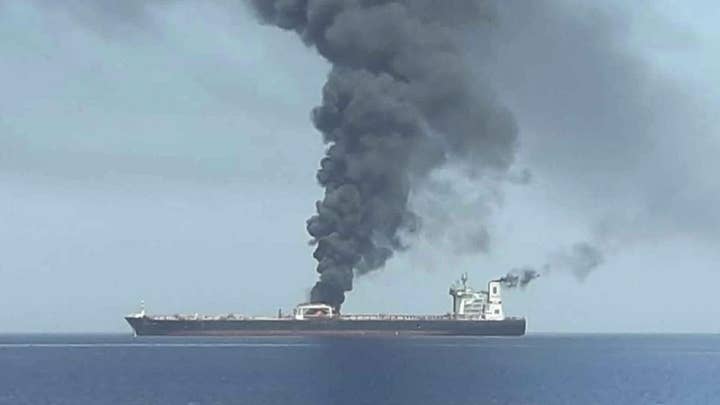 “What you should assume is that we're going to guarantee freedom of navigation throughout the strait,” he said. “This is an international challenge. This is important to the entire globe. The United States is going to make sure that we take all the actions necessary, diplomatic and otherwise, that achieve that outcome.”

One country that has sided with the U.S. in castling blame on Iran for the attacks is Saudi Arabia, with the Kingdom’s controversial Crown Prince Mohammed bin Salman saying in remarks published Sunday that the country will not hesitate to confront threats to its security.

In an interview with the Arabic-language newspaper Asharq al-Awsat, Prince Mohammed said Iran disrespected the visit to Tehran by the Japanese prime minister last week and responded to his diplomatic efforts to reduce regional tensions by attacking the two tankers.

The crown prince, however, offered no evidence to back up his allegation.

"The problem is in Tehran and not anywhere else," Prince Mohammed said. "Iran is always the party that's escalating in the region, carrying out terrorist attacks and criminal attacks either directly or through its militias."