Sen. David Perdue R-Ga. joins 'The Next Revolution' to discuss the audio released by the Washington Post and provides insight into the Georgia Senate race.

Sen. David Perdue, one of two Republicans in Georgia fighting to keep their seats in a tight runoff election, said Sunday that he doesn't believe President Trump’s leaked phone call with the state's top election official will have any bearing on Tuesday’s election.

The Washington Post obtained the voice audio of a phone call between Trump and Georgia’s Secretary of State Brad Raffensperger. At one point during the conversation, Trump reportedly said, "All I want to do is this. I just want to find 11,780 votes, which is one more than we have, because we won the state."

Georgia certified election results shows Joe Biden won the state by 11,779 votes. Trump said Biden only won because of fraud and called on interventions from state officials that have yielded no major changes. The ballots were counted three times, including a mandatory hand count and a Trump-requested recount. 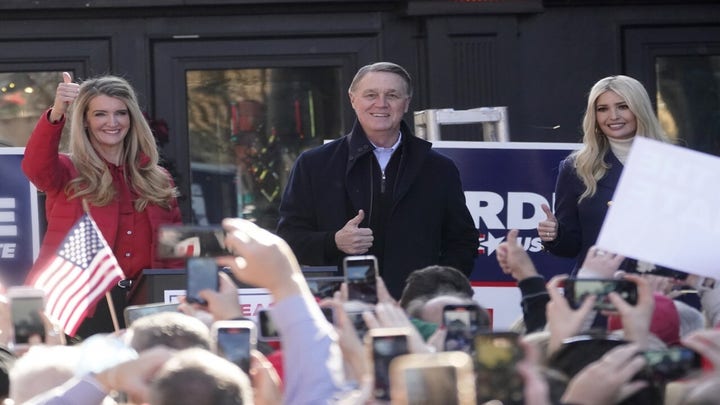 Trump’s critics seized on the phone call as evidence that the president was pressuring an election official to interfere, while Trump supporters said the fact that the audio was leaked shows the contempt that Georgia's secretary of state’s office has towards the president.

Perdue, who was a guest on "The Next Revolution," said he was "shocked" that a member of the Republican Party would tape a sitting president and leak it to the media.

"It’s disgusting in my view," he said. "But what the president said is exactly what he’s been saying the last few months."

Perdue said that Trump has been consistent with his claims that there were voter irregularities and said Trump just "wants some answers."

Perdue, who is facing Democrat Jon Ossoff in the runoff election, said earlier Sunday that he supports the Republican senators who announced they will contest the electoral votes from several states during a joint session of Congress later this week.

Sen. Kelly Loeffler, the other Republican in the state facing Democrat Rev. Raphael Warnock, said she hadn’t decided whether to join Republican colleagues in challenging the legitimacy of Biden’s victory over Trump when Congress meets Wednesday to affirm Biden’s 306-232 vote win in the Electoral College.

Both candidates have been supported by Trump.

Perdue pointed out that he has already called on Raffensperger to resign. He said the secretary of state’s office and the state’s legislature both failed to answer Trump’s questions about voter fraud in the state.

Steve Hilton, the host of the show, pointed out that Trump was set to campaign in Georgia on Monday and Perdue said he welcomes the support.

"He’s going to call his faithful out here," Perdue said. He said that Trump is going to remind voters in Georgia that the future of the country is in their hands.

"The people of Georgia will determine the future direction of the country. He’s going to remind them of that," he said.

Biden is also due to campaign in Georgia on Monday, and Vice President-elect Kamala Harris stumped in Garden City, Georgia, on Sunday, slamming Trump for the call."It was a bald, bald-faced, bold abuse of power by the president of the United States."