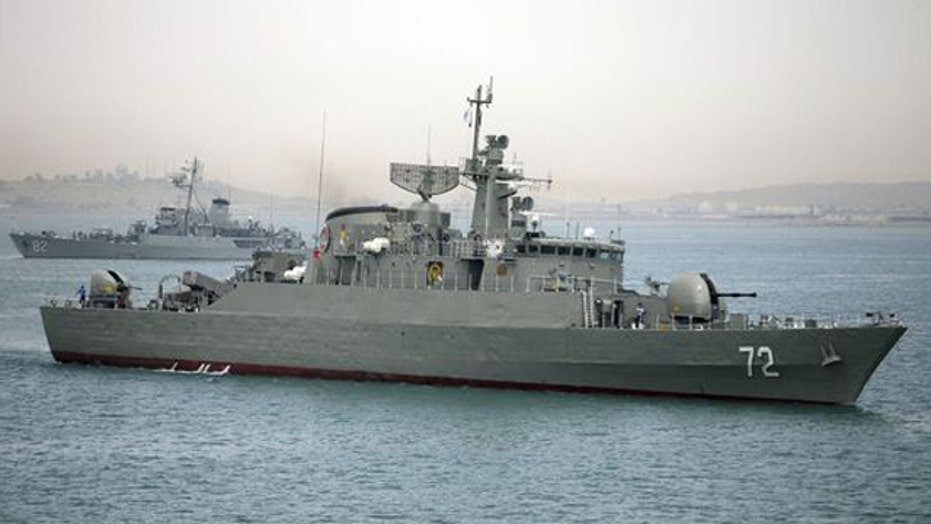 Why did Iran seize cargo ship?

WASHINGTON – The Pentagon said Wednesday that the U.S. would "be able to respond" if necessary to help a Marshall Islands-flagged ship that was diverted, and boarded, a day earlier by Iran -- though it remains unclear how far the U.S. Navy might be willing to go if the tense situation escalates.

Obama administration officials have given conflicting signals over what obligation the U.S. has to protect the vessel, as the Marshall Islands and U.S. have a longstanding security agreement.

Pentagon spokesman Col. Steve Warren said a U.S. guided-missile destroyer, the USS Farragut, is in the area and "keeping an eye on things," and in close enough proximity to the ship that they "will be able to respond if a response is required."

When pressed on what kind of incident aboard the ship would elicit a U.S. Navy response, he was vague, saying: "These [U.S. military] assets give commanders options." He said he didn't know "what the possibilities are," and the U.S. government is "in discussions with the Marshall Islands on the way ahead."

The open-ended answers underscore the difficult and complicated position the U.S. is in, just a week after the U.S. and Iran averted a potential stand-off in the region over an alleged arms shipment to Yemen.

On Tuesday, the Maersk Tigris was preparing to enter the Strait of Hormuz when the Iranian Revolutionary Guard fired across the Marshall Islands-flagged ship’s bow and boarded it. On Wednesday, it was en route to Bandar Abbas, the main port for Iran's navy, under escort by Iranian patrol boats, according to Maersk Line, the company that had chartered it.

Fox News is told the crew is mostly being confined to their cabins. The parent company of the Maersk Tigris said Wednesday the crew is safe but offered few details about the incident that took place 24 hours earlier.

There had been conflicting signals out of Washington over whether the U.S. has a responsibility to protect the ship.

"I am not aware of any specific agreement or treaty that calls for us to protect Marshallese vessels," a defense official told Fox News on Wednesday.

But a day earlier, State Department spokesman Jeff Rathke said otherwise. “The security compact between the United States and the Republic of the Marshall Islands gives the U.S. authority and responsibility for security and defense matters that relate to the Marshall Islands, including matters related to vessels flying the Marshallese flag,” he said at a briefing.

On Wednesday, Warren deferred to the State Department, saying they were correct. He clarified the U.S. compact with the Marshall Islands covers its flagged vessels. He said the U.S. has "discretion" to take action under maritime law, though it would require a presidential order.

Aside from the USS Farragut, he said three Navy patrol boats are in the southern end of the Persian Gulf.

The islands have scant natural resources, and in recent years have focused on expanding their service economy – including delving into the shipping industry.

The Marshall Islands signed a Compact of Free Association with the U.S. in 1983 and gained independence in 1986. Between 1999 and 2003, the two countries negotiated an amended compact that entered into force in 2004. Section 311 of the compact cites “the obligation to defend the Marshall Islands and the Federal States of Micronesia and their peoples from attack or threats thereof as the United States and its citizens are defended.”

Rathke said Tuesday that in addition to America’s interest in maintaining open, safe shipping lanes, the U.S. also has “a particular relationship with the Republic of the Marshall Islands.”

He added that it was unclear what legal obligations the United States had to provide defensive help to a Marshall Islands-flagged ship and said talk about using military force was “premature.”

On Thursday, Maersk put out a statement saying the seizure appears to be related to a 2005 cargo dispute with Iran, though the company stressed the crew in question is not party to that case. The statement said they only just learned a court has ruled Maersk Line should pay $3.6 million.

Iranian Foreign Minister Javad Zarif claimed Wednesday that the ship has a history of legal issues, including failing to pay for damages. The ship was asked to come to port, and when it refused, Iran's navy took action, he said.

Zarif, speaking at an event at New York University, also said “freedom of navigation in the Persian Gulf is a must and must be defended.”

Zarif maintained that international politics had nothing to do with Iran’s seizure of the cargo ships and deflected criticism that the incident heightens concerns that Tehran cannot be depended on as a trustworthy country, especially as a nuclear deal is still in the works.

Cor Radings, a spokesman for the ship's operator, Rickmers Ship Management in Singapore, said the company had no known issues itself with Iran and that it would be up to Maersk to comment on the Iranian claim.

There has been a history of escalations and provocations in the region.

The takeover of the Tigris was the second incident of Iranian "harassment" of free shipping within the Strait of Hormuz in four days, Warren said.

On April 24, four Iranian Revolutionary Guard gunboats "harassed" the American-flagged cargo ship Maersk Kensington as it transited the Strait into the Persian Gulf.