Mike Pence: Trump put the health of America first since day one

Vice President Mike Pence on Thursday said that President Trump had been “straight” with the American people on the coronavirus threat, after remarks emerged showing Trump telling veteran journalist Bob Woodward in March that he was “playing it down.”

“I don't know there's ever been a more accessible president of the United States than President Donald Trump. Whether he's walking to the airplane, walk into the helicopter with his press briefings, this president has been straight with the American people,” Pence said on “America’s Newsroom." “And I think when you look at the way he's led through this pandemic, that's also been true.”

Pence was responding to questions about Woodward’s new book, “Rage.” In February, Woodward interviewed the president for the book, and Trump described the novel coronavirus as “deadly stuff,” even as he publicly compared it to a seasonal flu.

Pence said Trump was talking about his tone and projecting strength rather than weakness: “You have to give the people the confidence that we will together get through this. And so his tone was one of projecting calm and confidence."

He then pointed to Trump’s actions on the crisis, including shutting down the economy and imposing travel bans on China and other countries. He also noted that the remarks came four days after Trump ordered that the economy be shut down. 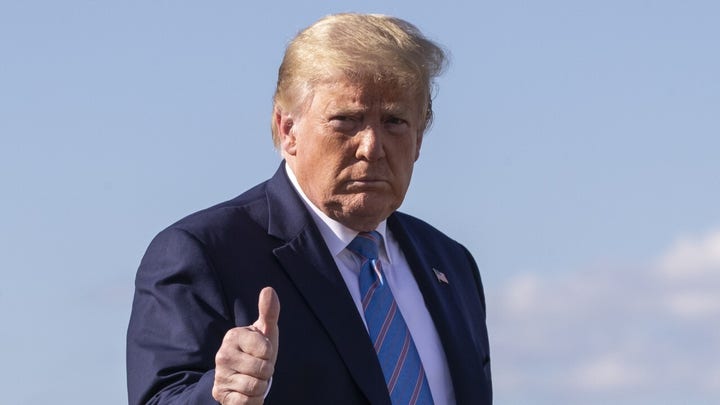 Pence was also asked if he knew that Trump had been interviewed 18 times by the Washington Post journalist for a total of nine hours.

“I ran into Bob Woodward, I think, once in the White House. I wasn't aware of a number of times the president spoke to him,” he said.

Trump himself pushed back against the Woodward controversy, asking why it took him so long to release the recordings if the quotes were so bad.

“Bob Woodward had my quotes for many months,” Trump tweeted Thursday. “If he thought they were so bad or dangerous, why didn’t he immediately report them in an effort to save lives?

“Didn’t he have an obligation to do so?” the president continued. “No, because he knew they were good and proper answers.”