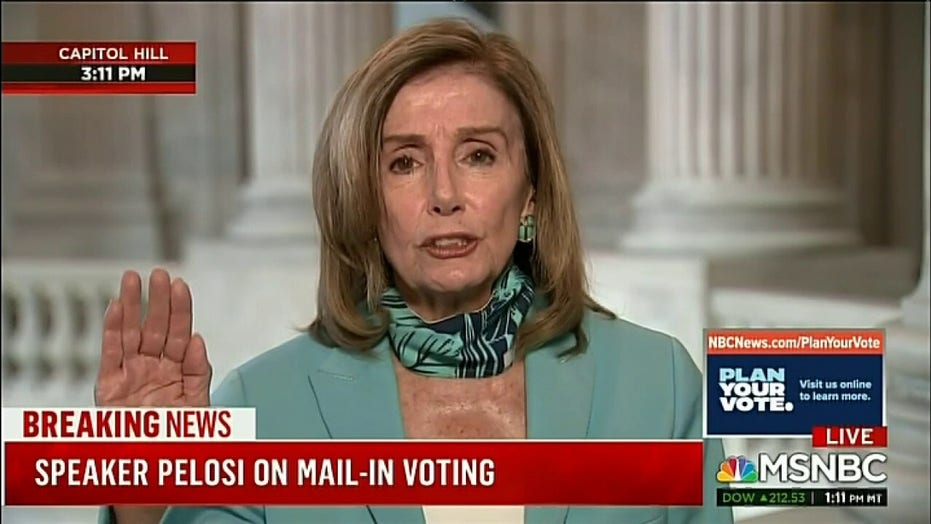 Nancy Pelosi: The domestic enemies to our voting system are at 1600 Pennsylvania Avenue

Nany Pelosi speaks during and appearance on MSNBC.

During an interview on "MSNBC Live" with anchor Ayman Mohyeldin, Pelosi slammed Trump's repeated rhetoric opposing mail-in voting and accused him of "scaring" potential voters and welcoming Russian interference in the upcoming election.

"The Russians were there and they are there now 24/7 trying to interfere in our election, but they're not the only ones," Pelosi said. "We take an oath to protect and defend the Constitution from all enemies, foreign and domestic. And sadly, the domestic enemies to our voting system and our honoring of the Constitution are right at 1600 Pennsylvania Avenue with their allies in the Congress of the United States."

The speaker then urged Democrats to "mobilize," "organize" and not allow Trump to "deter anybody from voting."

"And again, support the postal system, which is Election Central," Pelosi went on. "They’re doing everything they can [to] suppress the vote with their actions, scare people, intimidate by saying law enforcement will be there, diminish the role of the postal system in all of this. It’s really actually shameful. Enemies of the state."

Mohyeldin uttered the word "wow" during Pelosi's attacks but did not challenge her remarks and moved on to another subject.