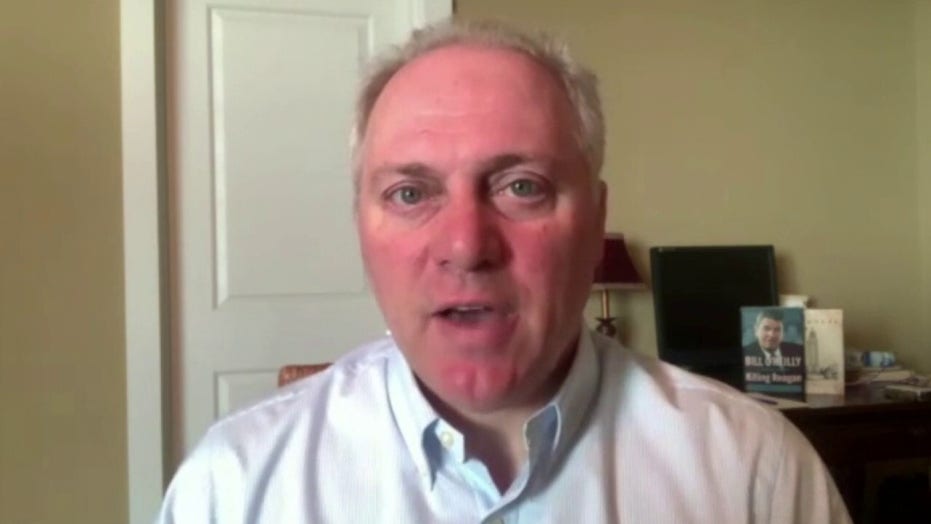 Scalise: 'Encouraging signs' that COVID-19 curve is flattening in Louisiana

House Minority Whip Rep. Steve Scalise gives an update on the virus in his state and efforts in Washington to get more money to small businesses on 'America's Newsroom.'

House Speaker Nancy Pelosi has temporarily sidelined a push to allow proxy voting in the House after Republicans slammed the Democrat-crafted plan -- which was designed to mitigate health risks during the coronavirus pandemic but would mark a significant change in how Congress does business.

The plan had been slated for a vote Thursday.

But Pelosi announced she pulled the plug on a leadership call Wednesday, saying that she and House Minority Leader Kevin McCarthy, R-Calif., would instead set up a group of bipartisan lawmakers to study remote voting and proxy voting as part of a way to reopen the House.

The change of plans happened after House Minority Whip Steve Scalise advised GOP members to vote "no" on the proposal they've dubbed the "Pelosi Proxy Voting Scheme" in the previously scheduled Thursday vote.

HOUSE RELEASES RESOLUTION FOR PROXY VOTING DURING PANDEMIC: WHAT'S IN IT?

The House will now consider a resolution to create a previously proposed select committee to probe the coronavirus response, instead of the proxy voting plan.

The House will still move forward with a bipartisan vote Thursday on reviving the Paycheck Protection Program, which ran out of money to help small businesses hard hit by coronavirus shutdowns. Republicans support this $484 billion plan to replenish the small business forgivable loan program and provide money for hospitals and COVID-19 testing.

But a sticking point emerged on the proxy voting plan to allow members who can't travel to Washington to vote for pandemic-related reasons to direct another member to vote on their behalf.

Republicans have accused Pelosi of trying to undo 200 years of precedent without thoughtful input from the GOP.

"Any changes of this magnitude must be done in a thoughtful, bipartisan manner through regular order and with input from all members of the House," Scalise's office sent out in whip notice to member offices.

"Instead, the Speaker is choosing to capitalize on the crisis and jam through a rules change that could have serious constitutional and institutional repercussions."

McGovern, the chairman of the House Rules Committee, released the text of a resolution Wednesday morning that would allow the House of Representatives to conduct proxy voting as a way to continue its business during the coronavirus pandemic while minimizing the number of members who need to physically be in Washington, D.C.

The resolution, the newest step in a controversial fight over whether and how Congress should allow its members to vote on legislation while not present in the nation's capital, would indeed represent a break in the longstanding practice requiring that members of Congress cast their votes in person.

"The report I released last month examined our voting options, and while every option presented unique advantages and disadvantages – including technological and security concerns – the report concluded that '[t]here is currently no perfect solution to allow absent Members to vote on the floor. However, proxy voting is likely the best of the options available under the circumstances,'" McGovern said in a letter to Democratic colleagues Wednesday morning.

Davis, the top Republican on the House Administration Committee, blasted the "secret" effort earlier Wednesday for leaving the GOP out of the discussion.

"There are other measures already in place to ensure Congress can carry on without enabling Members of Congress to email-away their right to vote," Davis said. "Following the terrible events of September 11th, there was an exhaustive effort to ensure House Rules would allow the House to continue to function during catastrophic times, an effort that took three years to achieve.

"Many options were considered, including proxy and remote voting, but the option that was determined best for the institution is to reduce the number of in-person Members required to satisfy a quorum - something we could be using now," Davis continued. "This proposal that we received today is not a serious bipartisan effort to keep Members of Congress safe during this pandemic, but instead an attempt to take advantage of the House when it is vulnerable."

It's unclear when a new remote voting plan might come to a vote, but the effort underway is designed to be bipartisan.