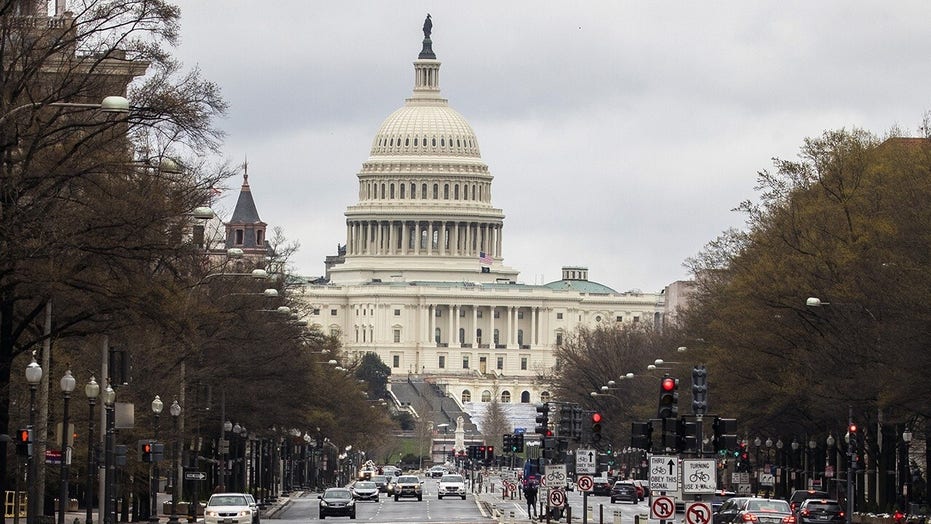 The House Rules Committee releases a new report on the pros and cons of a remote voting system; Chad Pergram reports.

Rep. Jim McGovern, D-Mass., the chairman of the House Rules Committee, released the text of a resolution Wednesday morning that would allow the House of Representatives to conduct proxy voting as a way to continue its business during the coronavirus pandemic while minimizing the number of members who need to physically be in Washington, D.C.

The resolution, the newest step in a controversial fight over whether and how Congress should allow its members to vote on legislation while not present in the nation's capital, would represent a break in the longstanding practice requiring that members of Congress cast their votes in person.

"The report I released last month examined our voting options, and while every option presented unique advantages and disadvantages – including technological and security concerns – the report concluded that '[t]here is currently no perfect solution to allow absent Members to vote on the floor. However, proxy voting is likely the best of the options available under the circumstances,'" McGovern said in a letter to Democratic colleagues Wednesday morning.

He continued: "The feedback I received helped me develop what I believe is our best path forward: temporary, low-tech, remote voting on the House floor specifically for legislation responding to this pandemic."

Though members on both sides of the aisle have advocated for some form of remote voting, most Republicans have opposed it and House Speaker Nancy Pelosi, D-Calif., seems to be just recently coming around to allowing the low-tech proxy voting option pushed by McGovern.

"So, the PPP will be on the basis of present and voting, and then we'll go from there," Pelosi said to reporters on Tuesday night, noting that the House would not be able to implement proxy voting for an expected Thursday vote on further coronavirus response spending. "But whatever we would do on proxy voting at this time would be strictly related to the coronavirus."

The McGovern resolution is targeted explicitly at the coronavirus pandemic, specifying that the House "Sergent-at-Arms, in consultation with the Attending Physician," is responsible for notifying the speaker "that a pandemic emergency is in effect." The speaker, consulting with the minority leader, would then be allowed to authorize proxy voting for 60 days.

The same process is used for extending the remote voting measure, and it can be revoked by the speaker unilaterally if she is told by the sergeant-at-arms and attending physician that there is no longer a "pandemic emergency."

To further tailor the resolution to be "strictly related to the coronavirus," as Pelosi said, another section states that proxy voting can only be used on votes "related to a measure ... as a response to the COVID-19 pandemic," along with a handful of procedural votes. This makes the resolution so narrow that it is not likely it could be used for a pandemic of a disease that is not COVID-19.

House Rules Committee Chairman Jim McGovern, D-Mass., left, joined by Rep. Alcee Hastings, D-Fla., presides over a markup of the resolution that will formalize the next steps in the impeachment inquiry of President Donald Trump, at the Capitol in Washington, Wednesday, Oct. 30, 2019. (AP Photo/J. Scott Applewhite)

The remote voting resolution requires that members who will not be present for a vote but would like to vote by proxy send a letter to the clerk of the House -- both physically and electronically -- designating which member will be voting in his or her place. This can be changed or revoked at any time if the member sends another letter to the clerk, who is required to keep a running list of the proxy voting status of members, or if the member shows up to the House themselves.

Members who are designated the proxy of another are bound to carry out the vote as the member who is not present specifically instructs them to.

There are two types of votes that proxy voting will be allowed on -- roll call votes and electronic votes. On roll call votes, a member will stand up when the person he or she is proxy for is called and indicate that their vote is "by proxy." On electronic votes, the members will vote electronically themselves then turn in their proxy vote on a ballot card with "by proxy" written on it.

While the rules for proxy voting on the passage of actual legislation and other questions are strict, the McGovern resolution would give committees broad authority to conduct remote business as they see fit. It also commissions a study on how the proxy voting procedures worked that will be released to the public.

Not all Democratic members are satisfied with the McGovern proposal, however. Despite security concerns of using things like video conferencing technology to cast votes that were raised in a report by McGovern, House Majority Leader Steny Hoyer, D-Md., pushed his colleagues to allow such technology for voting and other business on Tuesday. He joined Sens. Rob Portman, R-Ohio, and Dick Durbin, D-Ill., who pitched essentially the same idea last month.

"As you know, I have already indicated my clear preference for voting by the use of video-conferencing technology that millions of Americans now use to conduct businesses," Hoyer said in a letter Tuesday. "These systems allow one to see and identify the person who is speaking and hear what is being said with little doubt about the identity of the participant."

Senate Majority Leader Mitch McConnell, R-Ky., previously indicated that he believed remote voting to be unnecessary and saw ways to vote, like extending the time on individual votes so that only a handful of members need to be in the chamber at the same time, "without fundamentally changing Senate rules." This is how both houses of Congress have conducted votes on recently passed coronavirus legislation.

"It has been reported that Chairman McGovern is recommending a House rules change to allow for 'voting by proxy' during this period," McCarthy's letter read. "What are the details of this proposal, how will it avoid potential abuses of power, and when do you expect this proposal to be made public for the necessary scrutiny and member input that changing 200 years of House precedent would merit?"

The House Rules Committee will meet at 5 p.m. on Wednesday to discuss McGovern's remote voting measure in the 1100 room of the Longworth House Office Building. They are using that room because it is the House's largest hearing room, and will allow members to conduct social distancing.