'We are not doing a wall': Pelosi vows there will be no funding for a border wall in her first hours as House speaker

After retaking the gavel on Capitol Hill, Nancy Pelosi dashed any hopes from Republicans that she would be more agreeable to a border wall once her House speakership campaign was over by telling the press that Democrats will not agree to one; Doug McKelway reports.

Pelosi, D-Calif., who reclaimed the gavel after being elected House speaker on Thursday, commented on Tlaib's remarks during an MSNBC town hall, expressing distaste for the language but quickly suggesting Trump's foul mouth led the way in coarsening the rhetoric in Washington.

"I probably have a generational reaction to it," Pelosi said. "But in any event, I'm not in the censorship business. I don't like that language, I wouldn't use that language. I don’t … establish any language standards for my colleagues, but I don’t think it’s anything worse than what the president has said."

She added, "Generationally, that would not be language I would use, but nonetheless, I don’t think we should make a big deal of it."

Pelosi, who acknowledged the impeachment debate is "divisive," later told reporters in Washington “I’m going to talk to the president about his remarks,” as she prepared to head into a meeting on the partial government shutdown.

The newly surfaced video of Tlaib's Trump remarks quickly drew reactions from across Washington, from leadership on down. 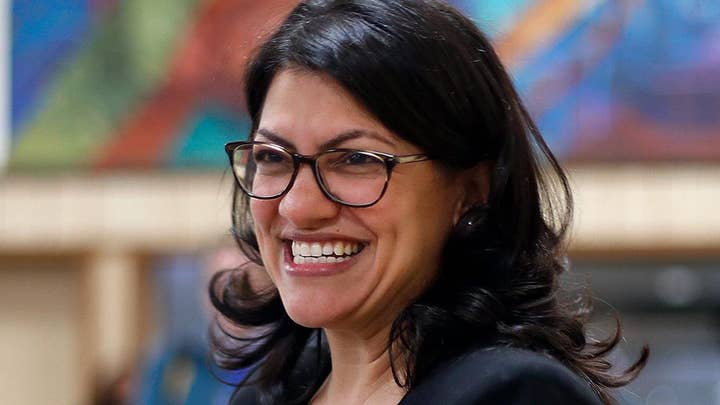 “People love you and you win,” the video showed Tlaib telling supporters Thursday night. “And when your son looks at you and says, ‘Momma, look you won. Bullies don’t win.’ And I said, ‘Baby, they don’t, because we’re gonna go in there and we’re gonna impeach the motherf***er.’”

"How do you work with anyone if this is what they have planned?" he said. "... That action should not stand, somebody should stand up to it."

Other senior Democrats, though, pushed back on the freshman congresswoman's language and tone.

Rep. Emanuel Cleaver, D-Mo., said members were “aghast” at Tlaib, lamenting “a fever” among some colleagues to impeach Trump.

“I don’t like that language,” Nadler told CNN. “More to the point, I disagree with what she said. It is too early to talk about that intelligently. We have to follow the facts and get the facts.”

Tlaib's comments came after she penned an op-ed for The Detroit Free Press, calling the president a “direct and serious threat” to the U.S., and urging impeachment proceedings.

Following the controversy over her videotaped remarks, a spokesman said in a statement that Tlaib was elected to shake up Washington and "absolutely" believes Trump should be impeached.

“I will always speak truth to power. #unapologeticallyMe,” Tlaib also tweeted on Friday.

“This is not just about Donald Trump. This is about all of us. In the face of this constitutional crisis, we must rise,” she added.

Pelosi has taken a more measured approach to the impeachment debate. She would not say Thursday whether the House would seriously consider impeaching the president—at least until after the release of Special Counsel Robert Mueller’s report on his investigation into Russian meddling and potential collusion with Trump campaign associates in the 2016 presidential election.

"Where it ends I don't know," Schiff told The Hill. "I presume it ends with Donald Trump being voted out of office."