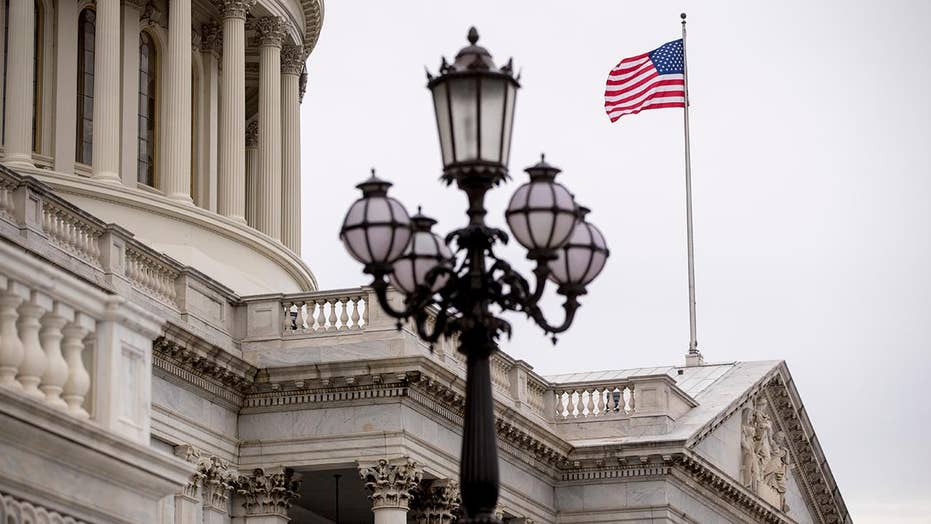 The Speaker of the House doesn’t talk to the Treasury Secretary on a Saturday night, then send him a letter, and, then blast out a press release, unless it’s urgent.

But that’s what happened Saturday night.

This is all about Washington’s second favorite, semi-annual acrobatic regimen: a fight over increasing the debt ceiling. Washington’s favorite exploit is a battle over funding the government. The latter will come in less than two months. But the former is here now – a little sooner than everyone thought.

Pelosi appears to prefer to work with Mnuchin on this issue – and do it telephonically.

EVERYTHING YOU NEED TO KNOW ABOUT THE DEBIT CEILING

The House Speaker has little use for acting White House Chief of Staff Mick Mulvaney. Multiple Congressional sources tell Fox that Mulvaney infuriated Democrats during the last set of bicameral, bipartisan meetings on the debt ceiling on Capitol Hill. Three weeks ago, a clearly agitated Pelosi told reporters she refused to “waste time” on Mulvaney’s characterization of her remarks in the session. She also said that Mulvaney “has no credibility” on the debt ceiling “whatsoever.”

That said, Mulvaney appears to be the administration official most in tune with the id of President Trump. So, lawmakers ignore Mulvaney - and Mr. Trump’s impulses - at their peril.

Still, Pelosi apparently prefers to use the phone to engage Mnuchin. And perhaps, the same is the case for Mnuchin when it comes to discourse with Pelosi. There’s a reason why Ambrose Bierce described the telephone as “an invention of the devil which abrogates some of the advantages of making a disagreeable keep his distance.”

To wit, regarding communications between Pelosi and Mnuchin:

The duo spoke last Wednesday night about an urgent need to raise the debt limit.

Pelosi and Mnuchin talked twice last Thursday. They spoke midday on Friday. Then the duo chatted for 12 minutes Saturday night.

MNUCHIN WARNS PELOSI DEBT CEILING COULD BE HIT BY SEPTEMBER

Mnuchin sent Pelosi a letter underscoring the need hike the debt ceiling in the next couple of weeks. The Speaker responded with her own missive to the Treasury Secretary Saturday night.

The nation’s top political leaders don’t chat this often and volley communiques between one another - especially on a Saturday night – unless there’s a problem.

The problem is that a vote to increase the debt limit is one of the most onerous ballots lawmakers can cast. The problem is that no one wants to vote to authorize more debt. But the problem is that Congress must lift the debt threshold soon or risk a downgrade in the nation’s credit rating, rattle the stock market or send a shock through the bond market.

The problem is that Mnuchin is imploring Congress to raise the debt ceiling right away – before lawmakers abandon Washington for most of August and the traditional summer recess. That’s because few in Washington paid close attention to this issue until a few days ago. That’s when Mnuchin suggested the government could “run out of cash in early September, before Congress reconvenes.” Government reserves will soon dwindle to about $250 billion. The accelerated timetable is partly due to diminished revenues, attributable to the new tax law.

One could spot a signal that government coffers are going dry the other day: the yield of short-term Treasury bill yields. The return on a Treasury bill maturing in mid-September is now higher than those ripening in mid-August. People are also not investing in shorter-term government securities - another sign of possible trouble.

If Congress and the Trump Administration don’t act soon, federal cash reserves could wane and the government could scuffle to meet liquidity needs.

By sending out a letter on a Saturday night, Pelosi is trying to sound an alarm, emphasizing to lawmakers the need to expeditiously raise the debt ceiling.

Official Washington has long known about the need to raise the debt ceiling. The sides were talking months ago about marshaling a two-year agreement on the spending caps and mixing it with the debt limit. Back in May, Senate Majority Leader Mitch McConnell (R-KY) suggested they were so close that an accord could just be hours away.

But then talks melted.

In her Saturday night epistle to Mnuchin, Pelosi insisted the sides cut a deal on “spending priorities.” This is a reference to stalled efforts to lift mandatory spending caps Congress imposed in a 2011 package to boost the debt ceiling. In Washington, the caps are commonly referred to as “sequestration.” Sequestration hits defense especially hard because the Pentagon commands the largest chunk of money doled out by Congress each year. President Trump wants more for defense. Democrats are willing to bend a little. But that’s why Pelosi is pushing for “parity.” In other words, Pelosi is requesting a parallel increase in funding for all non-defense programs, too.

Just a few days ago, a senior Congressional source told Fox that it looked like the sides may have to agree to a short-term extension of the debt limit. Technically, the spending cap issue doesn’t need to be resolved until mid-January. But Pelosi is coupling these issues now.

Meantime, many Congressional Republicans don’t want to just increase the debt limit unless it’s attached to something . Even if failing to address the debt ceiling issue threatens the market or the ability of the federal government to borrow. That’s why some on the GOP side have hoped for an imminent caps deal. A failure to latch the debt ceiling increase to a caps agreement could be an issue for some Senate Republicans.

This prompted some chatter about hooking the debt ceiling increase to the bill to fund the health coverage of sick 9/11 first responders. The House approved the plan 402-12 on Friday. McConnell promised to tackle the issue in the next couple of weeks. As he left the Capitol Friday afternoon, 9/11 first responder advocate Jon Stewart specifically spoke against Scotch taping the 9/11 bill to another measure or vice versa. But, when it comes to legislating, you don’t get style points.

And so, everyone in Washington has a problem without a lot of time to solve it. It’s possible Congress could nuke part of the August recess if something doesn’t come together quickly.