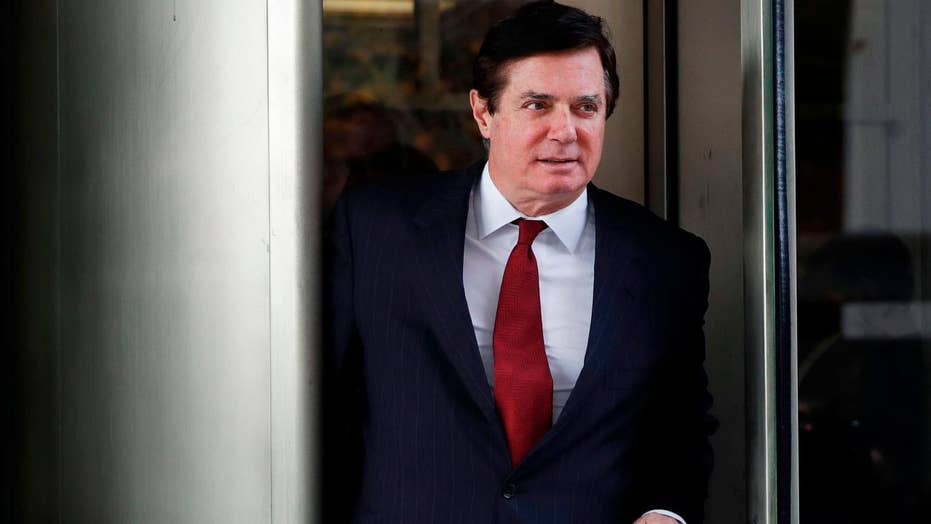 President Trump has not ruled out a pardon for Manafort's federal convictions; Ellison Barber reports from Washington.

A wheelchair-bound Paul Manafort learned Wednesday he will serve nearly seven years in prison after a federal judge nearly doubled the term handed down by another jurist in a separate case just last week.

But the second sentence in as many weeks won't end the former Trump campaign chairman's legal woes. Moments after the term was handed down, the Manhattan District Attorney's office announced a fresh indictment of Manafort on state charges including mortgage fraud. The case puts the ailing 69-year-old lobbyist who served as Trump's campaign chairman for three months during the tumultuous 2016 election in further legal jeopardy.

The latest sentence, handed down by U.S. District Judge Amy Berman Jackson in Washington, D.C., federal court, was for 73 months in connection with Manafort's guilty plea related to foreign lobbying and witness tampering. But Jackson ordered a portion to be served concurrently with a 47-month sentence meted out last Thursday in Virginia, meaning Manafort has 81 months left to serve behind bars. Manafort was credited with nine months time served.

The sentencing concluded one of the highest-profile cases to emerge from Special Counsel Robert Mueller’s Russia investigation, though the charges against Manafort did not pertain to Russia collusion or any work he did with the Trump campaign 2016.  The two counts for which Manafort was sentenced Wednesday carried a maximum prison term of five years each.

“This defendant is not public enemy number one, but he is not a victim either,” U.S. District Judge for the District of Columbia Amy Berman Jackson said on Wednesday. “The question of whether there was any collusion with Russia ... was not presented in this case, period, therefore it was not resolved by this case.”

Jackson added that prior to the appointment of Mueller as special counsel, the Justice Department was looking into the crimes.

WHO'S BEEN CHARGED IN MUELLER PROBE

“Saying, 'I’m sorry I got caught' is not an effective plea for leniency,” Jackson said.

Manafort, who suffers from gout, arrived in the courtroom Wednesday in a wheelchair, wearing a suit and tie.

“I am sorry for what I have done and all the activities that have gotten us here today,” Manafort told Jackson. “The person I have been described as is not someone I recognize. Let me be clear, I accept responsibility for the acts.”

He added: “While I cannot undo the past, I assure the future will be different. If nothing else, the suffering of my family will be a major deterrent.”

Manafort said he has “reflected on his life,” and is “upset” with himself for his “failures.”

“Because of this new self-awareness, I concede my conduct will be different,” he continued, while remaining seated in his wheelchair. “I will be 70 years old and I am my wife’s primary caregiver. This case has taken everything from me already. My properties, my cash, my life insurance…Please don’t take us away from each other for any longer than the 47 months imposed last week.”

He pleaded: “I ask for compassion in your sentencing. I promise you if you do, you will not regret it.”

The 69-year-old former lobbyist and political consultant avoided a trial before Jackson late last year by agreeing to cooperate with prosecutors and pleading guilty to two felony conspiracy charges related to his overseas lobbying work with Ukraine.

In February, Jackson ruled that Manafort “intentionally” breached that plea agreement by lying to investigators on Mueller’s team, which described Manafort in a court filing as a criminal who “repeatedly and brazenly violated the law … for over a decade.”

“The media attention around us…results in a very harsh process for the defendant, and I hope the court can consider, that harshness,” Downing said. “But for a short stint as a campaign manager, I don’t think we’d be here today.”

In the D.C. case, Manafort pleaded guilty to committing various financial crimes, including tax fraud and failing to register under the Foreign Agents Registration Act (FARA) regarding his foreign lobbying on behalf of Ukraine.

Manafort also pleaded guilty to obstructing justice by tampering with two witnesses. Mueller’s team alleged that Manafort and his former business partner Konstantin Kilimnik reached out to two potential witnesses oversees to have them conform their testimony to a false set of facts.

Mueller’s team also said that Manafort had lied about an August 2016 meeting with Kilimnik, a business associate who the U.S. said had ties to Russian intelligence. Mueller’s prosecutors have said that was the “heart” of the Russia investigation, but Manafort’s attorneys have maintained that any misstatements by Manafort on that topic were immaterial or unintentional, and that there was no evidence Manafort had any illegal contacts with Kilimnik.

In court on Wednesday, Manafort attorney Downing revealed that Manafort and Kilimnik were “communicating with senior State Department officials in Kiev,” and noted that Mueller’s team has conceded that “the highest level of state department officials knew of his activities.” Downing’s statement was the first time that detail was made public.

The sentencing comes a week after Manafort was sentenced to 47 months in prison after a federal jury in Virginia convicted him on eight counts of bank and tax fraud last year.

The initial sentencing guidelines recommended Manafort spend 19 to 24 years in prison, but U.S. District Judge T.S. Ellis said those were “excessive for this case.” Manafort will receive credit for the nine months he’s already served. He was also hit with a $50,000 fine.

Prosecutors said Manafort, 69, hid income earned from political work overseas from the IRS while fraudulently obtaining millions in bank loans. Manafort had pleaded not guilty to all 18 counts in the case.

Fox News’ Jake Gibson, Gregg Re, and Alex Pappas contributed to this report.