Parkland tragedy survivor Kyle Kashuv has emerged as a role model for young conservatives across the country -- and it was never more evident than this week, when he helped plan the largest-ever high school conservative conference.

Kashuv -- a staunch defender of the Second Amendment -- played a key role in the Turning Point USA High School Leadership Summit, which was held in Washington, D.C., and attracted more than 800 students from at least 40 states.

“It’s great to see these kids here because these are the leaders in their high school campuses. These are the kids who are going to energize and motivate other kids to come out to vote and to volunteer and to push conservative values,” Kashuv told Fox News.

Kashuv – who will enter his senior year at Stoneman Douglas High School in the fall -- booked many of the speakers directly and played a role in everything from the attendees having dormitory accommodations to contacting media members so the event got coverage. He also served as the master of ceremonies, introducing nearly every speaker over a jammed-packed, four-day span at George Washington University.

“Kyle is a total stud,” Turning Point USA founder Charlie Kirk told Fox News. “He’s a phenomenal person, driven and mature beyond his years. He works his ass off.”

Despite all the conservative star power, the attendees seemed to be as excited for Kashuv as they were for anyone.

Abigail Addi, a high school student from Queens, New York, traveled to the Washington, D.C., event because she is a supporter of Kashuv and his political views. She decided she couldn’t pass up the opportunity once Kashuv began promoting the event on social media.

“I met him last night. I was shaking, it was surreal,” Addi told Fox News. “He’s definitely a role model for me, and I’m sure for many other young conservatives.”

When Kashuv took the stage to answer a few questions from the audience on Wednesday, chants of “USA! USA! USA!” erupted. The crowd went into a frenzy anytime he appeared to hand out t-shirts, and teenagers shouted his name anytime he was spotted around campus. He received another enormous ovation when Kirk called him out on stage Thursday.

While he was essentially treated as a rockstar among the summit’s attendees, Kashuv considers the students his friends. 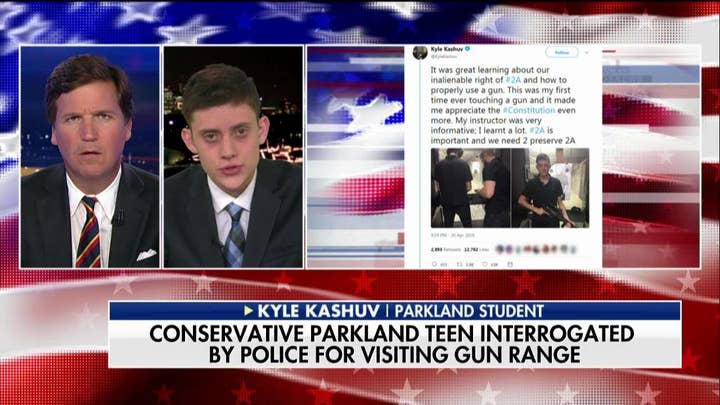 Speakers continuously praised Kashuv for organizing the event, but he returned the admiration by thanking the conservative leaders for simply giving him the time of day.

“People disregard high school kids all the time, but they understand the importance of these kids as the next generation of leaders,” Kashuv said.

Kyle Kashuv was invited to the White House to meet with President Trump and First Lady Melania Trump.

Kashuv became nationally known following the Feb. 14, 2018 tragedy in Parkland, Fla. when 17 of his classmates were killed by a school shooter. While many survivors emerged as anti-gun advocates, Kashuv defended the Second Amendment at every turn.

“As Americans we all have different point of views, and it’s important to represent them all equally,” Kashuv said on “Face the Nation” in March.

Kashuv first linked up with Turning Point when he was approached directly by the 24-year-old Kirk following the Parkland tragedy. The young conservatives hit if off immediately and Kashuv was offered a chance to help TPUSA on the spot.

“He brought this to the next level. We had 150 kids last year, now we have well over 800,” Kirk said. “He deserves all the credit. It’s his thing and we’re proud to advertise it as such. Putting together these kinds of speakers is unbelievable.”

Still not used to the spotlight, he looked to friends backstage for reassurance that he properly introduced speakers throughout the event. Kashuv even joked that he had to use his own money to purchase a suit for the event.

Last April, Kashuv even escorted an adoring Nebraska high school student to her prom after she approached him on social media – but only after she collected the 5,000 retweets he required to be her date for the evening.

Kashuv was emerging as a conservative darling well before the successful event, meeting with President Trump and even discussing the Second Amendment with Supreme Court Justice Clarence Thomas – but the TPUSA summit gave him a chance to mingle with his peers.

Being a hero of the right isn’t easy. Especially for a 16-year-old who opposes the majority of his classmates' calls for more restrictive gun laws. Kashuv said he has received death threats, is bullied at school, has been mistreated by teachers and receives endless criticism on social media – simply for coming out as a conservative.

“I couldn’t care less. The reason why I’m doing what I am today is not because I wanted to. It is because there was a necessity for someone to do it,” he said.