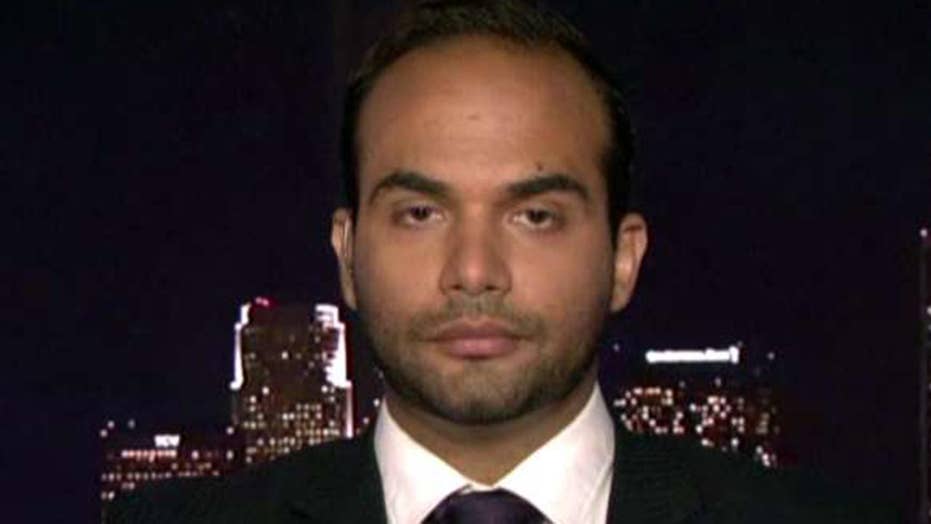 Papadopoulos: Intel agents tried to get my wife to wear a wire

Former Trump campaign aide George Papadopoulos said Thursday that the FBI tried to get his wife to wear a wire to "entrap" him and that he thinks Congress "probably has transcripts" of meetings he had that prove he was spied on by the FBI.

"Besides the FBI trying to have my then-girlfriend, now wife, actually wear a wire to try to entrap me herself -- which was completely crazy -- she was an Italian citizen visiting me as a girlfriend. And they subpoenaed her and tried to flip her against me, which was incredibly bizarre," Papadopoulos said on Fox News' "The Ingraham Angle."

Papadopoulos said he believes his wife was targeted because she knew all about academic Joseph Mifsud's connection to Italian government.

"But what we believed that they really targeted her for is, we believe she knew all about Joseph Mifsud's connections to the Italian government and his connections in Europe, which we just found out today that ... the prime minister ... just fired the heads of three intel agencies in Italy. And I think it has to do with the person, Joseph Mifsud, who the president and Devin Nunes and other people have been asking the government in Italy to examine a lot more because he's actually at the core of this entire scam," Papadopoulos said.

Mifsud, 59, a professor from Malta who helped ignite the Russia probe in 2016, has largely vanished from the public eye since his name began surfacing in news stories. Nunes, a California Republican, is ranking member of the House Intelligence Committee.

Papadopoulos also told host Laura Ingraham that he thinks Congress and the president have already seen transcripts of meetings the former Trump aide had and that it will be a "big bombshell" when revealed.

"Something I want to make clear about this meeting with [Alexander] Downer: I don't think I was just suspicious that he was spying to me, because in my transcripts to Congress you see people like Mark Meadows and John Ratcliffe asking me if I ever was presented with transcripts of any meetings I've had with Alexander Downer and Joseph Mifsud or any of these strange people that were running into me and I said no," Papadopoulos said.

"So I think Congress probably has transcripts, they probably already know and the president already knows that these people were spying. It's going to be a big bombshell moving forward."