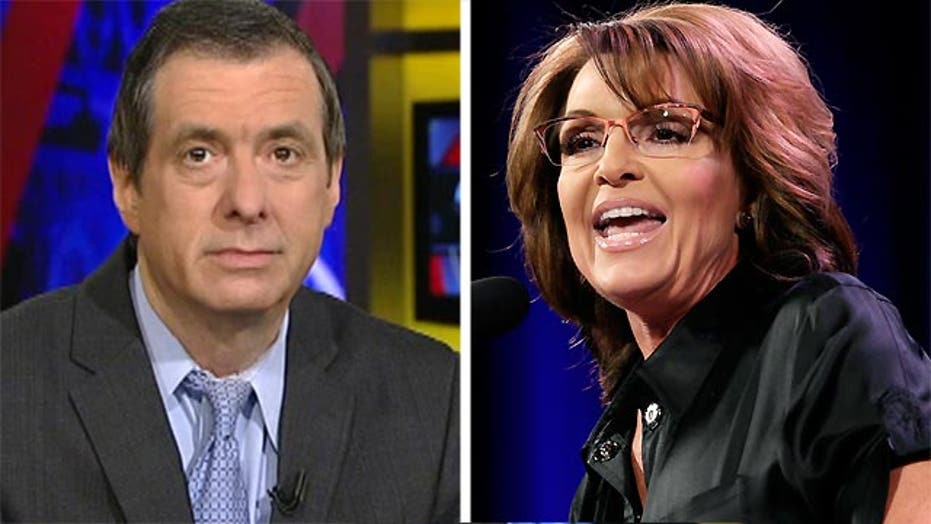 Sarah Palin may be “seriously interested” in running for president, but the media — and especially the conservative media — are giving her a very cold reception.

First there’s the question of whether Palin really might get into the 2016 sweepstakes. I’m with the skeptics on this one: Palin hasn’t run for anything since quitting the Alaska governorship in the middle of her term. She talked up her interest in the 2012 race and then sat it out. She hasn’t hired any staff or put together even a skeleton organization.

I’ll believe Palin is serious about the race when she steps down as a Fox News contributor. That’s what Mike Huckabee and Ben Carson did, and they are off and running.

But the loudest chatter right now is about the weekend speech she gave at an Iowa cattle call hosted by Rep. Steve King. The most polite description bandied about the press is disjointed.

The most devastating analysis, widely picked up elsewhere, is by conservative reporter Byron York in the Washington Examiner:

“First, Palin embarked on an extended stream-of-consciousness complaint about media coverage of her decision to run in a half-marathon race in Storm Lake, Iowa in 2011. She then moved on to grumbling about coverage of a recent photo of her with a supporter who had made a sign saying ‘F*** you Michael Moore’ in reaction to the left-wing moviemaker's criticism of the film ‘American Sniper.’ Then it was on to Palin's objections about the social media ruckus over a picture of her six-year-old son Trig standing on the family's Labrador Retriever.

“It was all quite petty, and yet the complaining took half of Palin's allotted time.”

“‘There was a certain coarseness to her that wasn't there before,’ said yet another social conservative who noted that some in the crowd were uncomfortable with Palin declarations like, ‘Screw the left in Hollywood!’”

And there was this on-the-record critique: “‘I know she is popular, but it is hard to take her seriously given that performance,’ said Sam Clovis, the conservative Iowa college professor, radio commentator, and sometime political candidate. ‘Palin was a sad story Saturday. With every speech she gives, she gets worse and worse. If one were playing a political cliche drinking game, no one would have been sober after the first 15 minutes of an interminable ramble. It was really painful.’”

“The former 2008 vice-presidential nominee told reporters last week that she was “seriously” considering running in 2016. But her meandering and often bizarre 33-minute speech in Des Moines proved she wasn’t. Sample line: ‘The man can only ride you when your back is bent, so strengthen it so America won’t get taken for a ride.’ She will always be an entertaining speaker at conservative events, but she clearly lacks the discipline for a full-fledged campaign.”

So while Scott Walker, Ted Cruz, Carson and Huckabee drew strong reviews — and Chris Christie not so much — I think it’s fair to say that Palin didn’t help herself with that speech.

Now a single Iowa gathering in January of 2015 doesn’t mean much. And in no way am I underestimating Palin’s popularity with conservative audiences, or her ability to connect with those audiences when she’s on. She’s also a fascinating figure for the media, which boost their ratings and clicks whenever they cover her.

I think some in the media were unfair to Sarah Palin during her VP run, and I also think she suffered from self-inflicted wounds. But when she went the reality show/best-selling book route after giving up the governorship, she seemed to veer more toward becoming a pop-culture celebrity than a political player.

That doesn’t mean Palin can’t get back in the game; Jeb Bush’s last election was in 2002. Yet the conventional wisdom, as reflected by the Washington Post’s Chris Cillizza, is hardening:

“But, here's the thing: There is NO indication that Palin is ‘seriously’ doing anything that would indicate any real interest in the race aside, of course, from doing that easiest thing of all: Just saying it.

“This has been Palin's M.O. since she was the Republican vice presidential nominee in 2008. She hints at the possibility that she might run, a hint that sends all of those who love and hate her -- there are tons of both -- into a tizzy.  But, there's never any ‘there’ there.  And, it's worth calling it out.”

There was one other famous name out in Des Moines, and that was Donald Trump. As much as I enjoyed covering his pre-campaign last time, I don’t think anyone seriously believes The Donald is going to trade “The Apprentice” for a grueling two-year campaign. And unless Palin starts making 2016 preparations soon, she’s going to be viewed as in the Trump category.