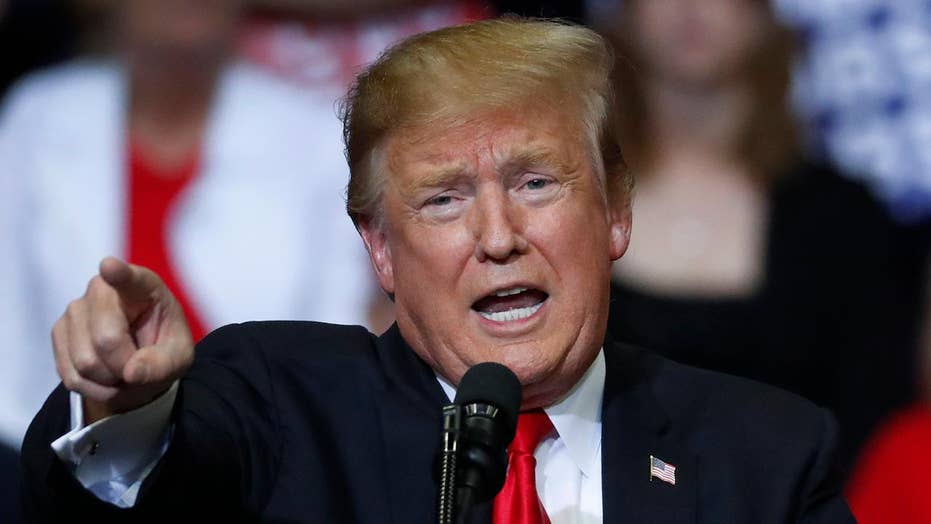 With President Trump entering the "counter-punch" phase of the Russia investigation, allies are urging him to consider two avenues -- each with its own potential payoffs and pitfalls -- to investigate the origins of the probe and hold top Justice Department officials accountable for alleged wrongdoing.

Special Counsel Robert Mueller announced the completion of his investigation last week, transmitting his more than 300-page report to the Justice Department for review. Attorney General Bill Barr released a four-page summary of Mueller’s report Sunday, stating the special counsel found no evidence of collusion between members of the Trump campaign and Russia during the 2016 presidential election, despite numerous offers from Kremlin-linked individuals.

This week, Trump allies are seizing on the results of the nearly two-year-long investigation and presenting options for the president to pivot to uncover alleged misconduct at the start of the probe.

Chairman of the Senate Judiciary Committee Lindsey Graham, R-S.C., announced a sweeping investigation into “the other side,” focusing on alleged Foreign Intelligence Surveillance Act abuses and the hazy origins of the Russia investigation at the FBI. He also called for Barr to appoint a new special counsel to review the issues.

“I’d like to find somebody, like a Mr. Mueller, that can look into what happened with the FISA warrants, the counterintelligence investigation,” Graham said Monday. “There are some people that are never going to accept the Mueller report, but by any reasonable standard, Mueller thoroughly investigated the Trump campaign. You cannot say that about the other side of the story.”

Graham added that “due to the emotional nature of this,” he hoped the attorney general would “appoint somebody outside the current system to look into these allegations, somebody we all trust, and let them do what Mueller did,” noting he’s been calling for the appointment of a second special counsel since 2017 to investigate “whether or not a counterintelligence investigation was opened as a backdoor to spy on the Trump campaign.”

Graham said he wanted answers on how much money the Democrats paid research firm Fusion GPS to commission the dossier, or if the contents of the dossier ever were verified. Republicans have also long scrutinized the decision to surveil former Trump adviser Carter Page in 2016, based on dossier allegations. Page, despite being surveilled by the FBI and investigated during Mueller's probe, has never been charged with a crime.

Sources told Fox News this week that during a luncheon with Senate Republicans on Capitol Hill this week, the president was enthusiastic about the idea of appointing a new special counsel, and seemed excited about Graham’s “deep-dive” investigation.

“If we don’t want to have a politicized FBI and Justice Department, then somebody, whether it’s the inspector general or Congress, or somebody else, should look hard at some of these things that are troubling,” Trusty, now with Ifrah Law, told Fox News. “I don’t have complete faith in the inspector general’s office making the types of judgments that might need to be made, but I’m not enamored by the idea of having endless special counsels auditing the last special counsel.”

But the appointment of a second special counsel is just one avenue Republicans are presenting.

Rep. Devin Nunes, R-Calif., who, while chairman of the House Intelligence Committee during the last Congress probed alleged FISA abuse, said this week that he was considering issuing criminal referrals for top Justice Department and FBI officials involved in the origins of the Russia investigation “by the end of next week.”

Nunes, who Trump recently said may one day be hailed as a "great American hero" for his work on the Intelligence Committee, said he would go after “people who lied to Congress, perjury, criminal conspiracy,” and hoped to “make as much public as possible.”

“The FBI and DOJ should not be able to use counter-intelligence capabilities that are used to target terrorists and other bad guys around the globe against political parties,” Nunes said this week on “The Story.” “Republicans and Democrats should agree political opposition research for one candidate should not be used to let the nation’s top spy capabilities be used against political parties.”

Justice Department Inspector General Michael Horowitz is currently investigating any alleged misconduct related to FISA warrants delivered from the Foreign Intelligence Surveillance Court. The status of that investigation, or a timeline of when the review will be complete, is unclear.

Meanwhile, Sen. Rand Paul, R-Ky., also is pushing for transparency on the matter. This week, Paul offered an amendment which would reveal what role, if any, former President Barack Obama played in the origin of the Trump-Russia investigation.

“What we need to discover, and we do not yet know, was President Obama involved? Was this done for partisan purposes? Was this done to try to elect Hillary Clinton?” Paul asked on the Senate floor this week.