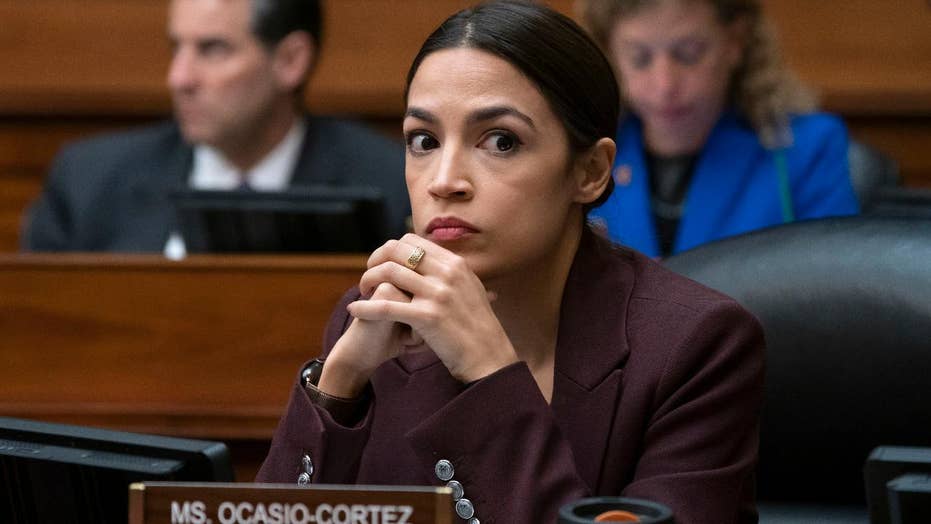 Rep. Alexandria Ocasio-Cortez, D-N.Y., lashed out at an anonymous shutterbug who “creepily” snapped a picture of her at a restaurant with an aide who was feasting on a juicy burger -- an image that soon made the rounds on social media, as it was taken days after she questioned whether Americans needed to eat so much meat.

“Tonight a dude was creepily (and obviously) taking a picture of me while pretending he wasn’t and I had to break his imaginary fourth wall and say 'Hi! I’m a person! This is weird!'” she tweeted.

The picture, posted by conservative social media strategist Caleb Hull, showed Ocasio-Cortez and Chief of Staff Saikat Chakrabarti eating at an unidentified restaurant. Notably, Chakrabarti was munching on a burger, just days after Ocasio-Cortez had warned against eating too much of America’s favorite dish.

In talking up her Green New Deal, which had initially come with an FAQ that talked (presumably tongue-in-cheek) about “getting rid” of “farting cows” to help combat climate change, Ocasio-Cortez said on a TV appearance that Americans may need to eat fewer burgers.

“In the deal, what we talk about, and it’s true, is that we need to take a look at factory farming, you know? Period. It’s wild,” Ocasio-Cortez said on Showtime's late-night “Desus & Mero" last week. “And so it’s not to say you get rid of agriculture, it’s not to say we’re gonna force everybody to go vegan or anything crazy like that. But it’s to say, ‘Listen, we gotta address factory farming. Maybe we shouldn’t be eating a hamburger for breakfast, lunch, and dinner.' Like, let’s keep it real.”

Earlier this month she told a school assembly of teenagers in Queens to “skip meat/dairy for a meal.”

The image of her aide with a burger was too juicy to resist for critics seeking examples of a double standard.

“Hi AOC, why is your Chief of Staff eating a hamburger?” Hull tweeted, along with a headline showing that she urged Americans to eat fewer hamburgers. He also deleted a tweet of the photo by itself.

Hull later clarified that “this picture was only taken and sent to me because AOC told the country to eat less hamburgers and her COS is here eating a hamburger.”

“Notice how she wasn’t confronted and forced to leave the restaurant like liberals have been doing to the GOP?” he added, referring to incidents where Republicans and Trump administration officials have been hounded out of restaurants by liberal activists.