U.S. Rep. Alexandria Ocasio-Cortez, D-N.Y., defended the Green New Deal after the recent rollout of the New York Democrat's policy proposal got a lot of attention over “farting cows.”

In an appearance Thursday night on the premiere of Showtime's late-night “Desus & Mero" show, the comedy pair hosts of the program asked the freshman congresswoman why she thought the initial reaction focused on "cow farts."

“In the deal, what we talk about, and it’s true, is that we need to take a look at factory farming, you know? Period. It’s wild,” Ocasio-Cortez said. “And so it’s not to say you get rid of agriculture, it’s not to say we’re gonna force everybody to go vegan or anything crazy like that. But it’s to say, ‘Listen, we gotta address factory farming. Maybe we shouldn’t be eating a hamburger for breakfast, lunch, and dinner. Like, let’s keep it real.”

"Listen, we gotta address factory farming. Maybe we shouldn’t be eating a hamburger for breakfast, lunch, and dinner. Like, let’s keep it real."

“But we have to take a look at everything," Ocasio-Cortez continued, "and what we need to realize about climate change is about every choice that we make in our lives, you know?" 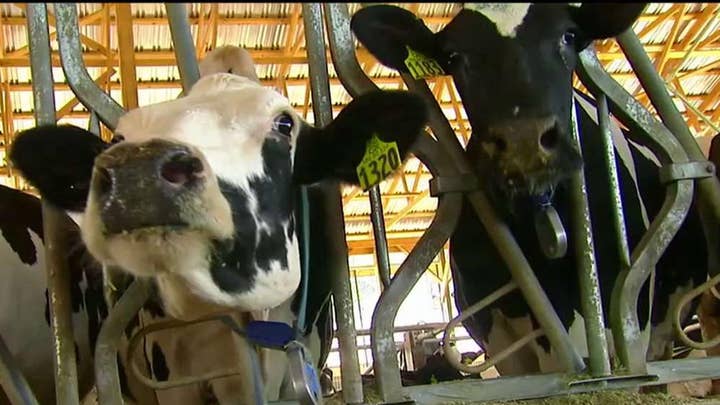 On the original FAQ page for the Green New Deal's rollout, Ocasio-Cortez and other Democrats backing the plan had explained why the proposal included the goal of “net zero” greenhouse gases in 10 years.

“We set a goal to get to net-zero, rather than zero emissions, in 10 years because we aren't sure that we'll be able to fully get rid of farting cows and airplanes that fast,” the page said.

But after the FAQ page was widely mocked, the Democratic lawmakers took it down.

Also on Thursday's show, the Democratic socialist also defended her call for a 70 percent marginal tax rate on incomes over $10 million, which she said represented a “pretty good year.”

“It really comes down to the question of, ‘Isn’t $10 million enough?’ Like, when does it stop?” she asked. “At what point is it amoral that we’re building Jeff Bezos a helipad when we have the most amount of homeless people in New York City?”

Like Ocasio-Cortez, Desus Nice (aka Daniel Baker) and partner The Kid Mero (aka Joel Martinez) hail from the Bronx, N.Y.