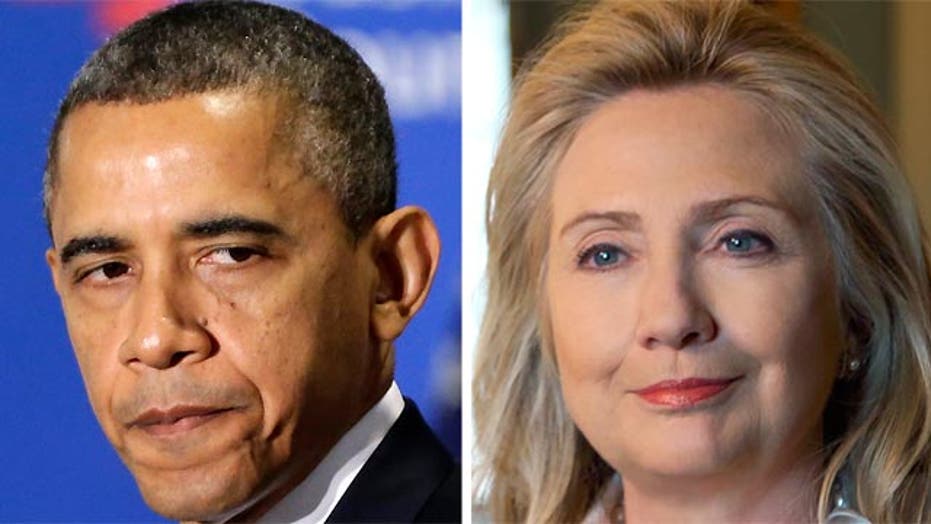 Will voters want to give Democrats control of the White House for 12 straight years?

The country has shown a natural tendency to rotate the presidency between the parties, at least for the last 60 years. And no matter how much Hillary distances herself from President Obama, that will cast a bit of a shadow over her campaign, in my view.

I think much of the country collectively senses that a party in power for two terms may be running low on ideas and has already tapped its most talented folks to run the government. Plus, the party in power accumulates all the baggage of being blamed for everything that has gone wrong over eight years. And even if things are going well—which they’re decidedly not at the moment—“time for a change” remains a powerful slogan.

Hillary obviously can’t exactly run as the anti-Obama, having spent four years running his State Department. Nor does she want to tick off his base by letting voters think she won’t build on the Obama legacy. So how much of an obstacle is the notion of a third term?

“For all the strengths she would bring to a 2016 race, Mrs. Clinton would face a significant historical obstacle. American voters have demonstrated their reluctance to award the same political party a third consecutive term in the White House.”

Harwood argues it would be good for Hillary if the Democrats lose the Senate this fall, because then she could run as a change agent against the Republican Congress. Otherwise she’s saddled with Harry Reid in charge of half of Capitol Hill, which muddles the message.

The only time in the last six decades that voters have awarded one party a third term was in 1988, when George H.W. Bush, running as a “kinder, gentler” candidate, succeeded Ronald Reagan. The Gipper had suffered his share of second-term setbacks, especially with Iran-contra, but things were generally good in the country, giving Bush an easier sell.

But veteran analyst Jeff Greenfield says the third-term talk is overblown because several past elections could easily have gone the other way:

“In 1960, Nixon lost to John Kennedy by less than two-tenths of 1 percent of the popular vote. In fact, given the highly creative vote counting methods in Illinois and (even more so) in Texas, and the fact that some of Alabama’s votes went to a slate of un-pledged electors, it’s not at all clear that JFK won the popular vote at all…

“In 1968, Nixon beat Hubert Humphrey by seven-tenths of 1 percent of the popular vote,” an outcome that “may well have been shaped by the Nixon campaign’s role in sabotaging a Vietnam peace accord…

“In 2000 — well, perhaps we need not revisit the campaign in which Al Gore won half a million more votes than George W. Bush, and in which a one-vote Supreme Court majority sanctioned a Bush victory in Florida by 537 votes out of some six million cast.”

Greenfield’s take? “Whatever worries will keep the next Democratic nominee up at night, that ‘third term curse’ should not be one of them.”

Put me down as skeptical. Just because a couple of candidates came close to winning a third term for their party doesn’t mean it’s a non-factor.

In fact, Politico’s Roger Simon is convinced that “Hillary Clinton should worry” about the third-term dilemma:

“She has some of the same flaws as Obama. She can project a chilly public personality, a remoteness, a reserve and a detachment from ordinary people…

“Clinton must connect with voters and sell her vision of America — which thus far she has kept largely to herself — in order to win.

“And even if she does that, she is not a sure thing: If she can be labeled as Obama’s third term, she can be beaten.

“That’s because I don’t think there are too many people who want an Obama third term. Not even Obama.”

Certainly not if it hampers his golf game.

There is, to be sure, a giant X factor in these calculations: Who would Hillary be running against? If the Republicans don’t nominate a candidate who appeals to more than the party’s conservative wing, these third-term concerns might be meaningless.

But a strong GOP candidate will undoubtedly play up the argument that it’s time for a break from Democratic rule—and run as much against Obama as his possible successor.