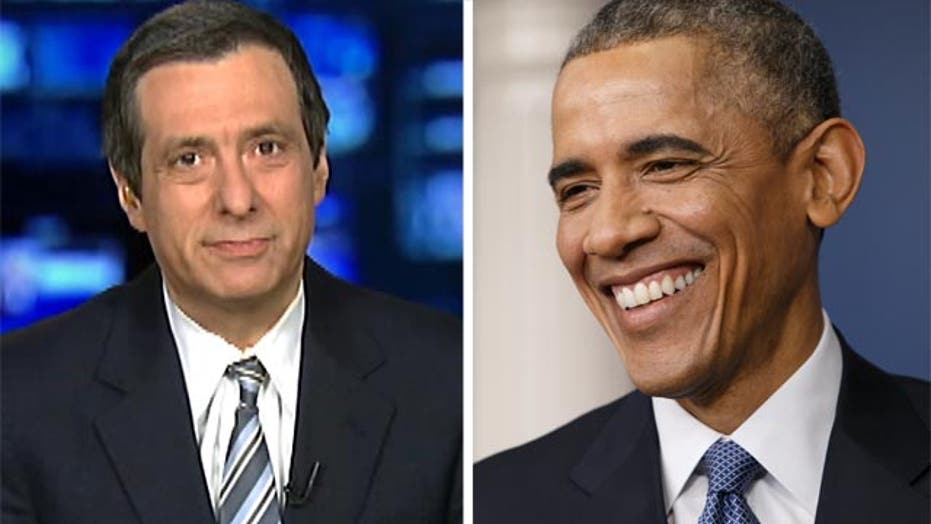 President Obama took a victory lap the other day, and nobody in the press tried to slow him down.

Obama skated in a year-end news conference, easily handling questions that were bland, tentative or rambling.

This is not unrelated to the fact that he skipped the front-row TV correspondents—Jonathan Karl, Ed Henry, Major Garrett—who tend to ask more confrontational and, yes, theatrical questions.

And it most decidedly had nothing to do with the president’s unusual move of fielding questions only from female reporters. It’s not how the queries were delivered, it’s how they were framed.

You would have no idea from watching that presser that Obama had taken hugely controversial unilateral action on Cuba, immigration and climate change--or that his administration had been plunged into a debate about torture by a Senate report on CIA interrogations, which wasn’t mentioned at all.

I’m not saying the press has to be prosecutorial toward the president. But a full-dress news conference is a rare chance to ask aggressive questions that are honed to knock the commander-in-chief off his talking points. A correspondent can even do something as basic as quoting a Republican critic and asking the president to respond. But there was none of that.

The Wall Street Journal’s Colleen Nelson came the closest to taking on the president. “You didn’t make much progress this year on your legislative agenda,” she said. “Lawmakers say they’re less inclined to work with you if you pursue executive actions so aggressively.” But then she trailed off by asking whether he would continue to pursue executive orders, producing a bland answer about cooperating with Congress.

The AP’s Julie Pace at least asked the president to respond to dissidents who say his recognition of Cuba would give the Castro regime unwarranted benefits. McClatchy’s Lesley Clark also raised Cuba, but she asked about a five-part question—never a good idea--prompting Obama to cut her off and discourse at length.

In a followup, Clark asked if Fidel’s name had come up in the president’s discussions with Raul Castro. That enabled Obama to tell an anecdote about Raul teasing him about speaking nearly as long as Fidel. Bottom line: Obama largely repeated what he’d already said in announcing the shift.

Radio reporter April Ryan asked about black America, which could have been a provocative question in the wake of Ferguson and Staten Island. But she simply asked, “What is the state of relations?” And that allowed the president to hold forth on how things have gotten better but there’s more work to do.

Obama made news on Sony, saying the company should not have pulled “The Interview” under threats from North Korean-backed hackers, but that was in response to a straightforward question. The administration had clearly decided to pivot toward a more critical stance.

There was, however, one priceless endorsement when Obama graciously asked Politico’s Carrie Budoff Brown about her forthcoming move to Europe. She said she was going to Brussels to help launch a European version of the website.

“There’s no doubt what Belgium needs is a version of Politico,” Obama said.