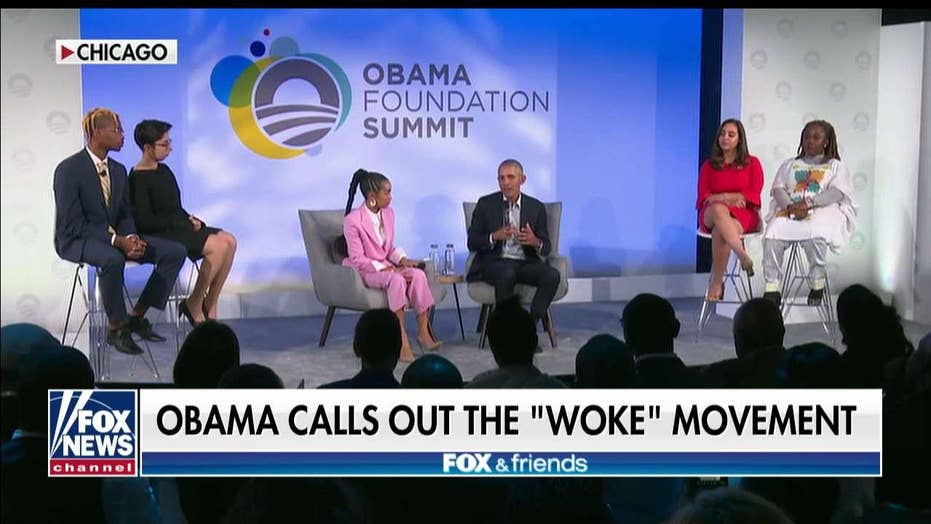 Former President Barack Obama took aim Tuesday at “woke” virtue signaling and cancel culture, telling an audience in Chicago that activists “should get over” their obsession with ideological purity tests.

During a discussion at the Obama Foundation Summit held at the Illinois Institute of Technology, the 44th president explained that the world is more complicated than people realize and urged politically active Americans to be practical if they want to be effective.

MICHELLE OBAMA SAYS THERE'S 'ZERO CHANCE' SHE'LL RUN FOR PRESIDENT: 'IT'S JUST NOT FOR ME'

“This idea of purity and you're never compromised and you're always politically woke, and all that stuff, you should get over that quickly," Obama said. “The world is messy. There are ambiguities. People who do really good stuff have flaws. People who you are fighting may love their kids, and share certain things with you.”

The blunt remarks were essentially an expanded version of a saying Obama often employed while in office -- don't let the perfect be the enemy of the good. The comments Tuesday show the ex-president embracing the image of a practical elder statesman at a time when his party is drifting ever-leftward -- essentially urging young party activists to reconsider a culture of calling out those who run afoul of their worldview, whether in the language they use or the policies they espouse.

Obama specifically noted that a trend he sees on college campuses could do more harm than good, suggesting young people are focusing more on casting judgment on others than advancing positive change.

“One danger I see among young people, particularly on college campuses,” he continued, “I do get a sense sometimes now among certain young people -- and this is accelerated by social media – there is this sense sometimes of the way of me making change is to be as judgmental as possible about other people, and that’s enough. Like, if I tweet or hashtag about how you didn’t do something right or use the wrong verb, then I can feel pretty good about myself, ‘cause man did you see how woke I was? I called you out.'

“That’s not activism. That’s not bringing about change. If all you’re doing is casting stones, you’re probably not going to get that far. That’s easy to do.”

“I can’t make people not afraid of black people,” she said, according to The Hill. “I don’t know what’s going on. I can’t explain what’s happening in your head.

“But maybe if I show up every day as a human, a good human, doing wonderful things, loving my family, loving our kids, taking care of things that I care about — maybe, just maybe that work will pick away at the scabs of our discrimination. Maybe that will slowly unravel it.”