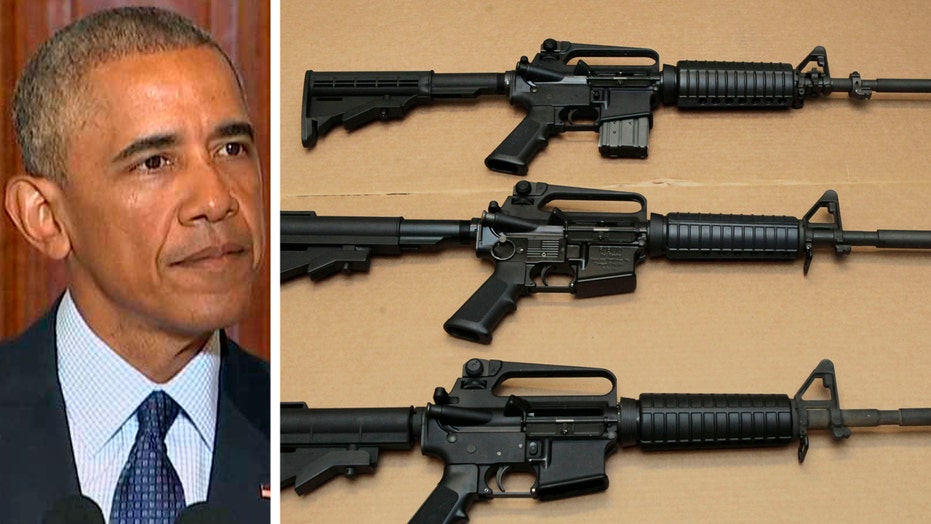 Obama: We have to make it harder for people who want to kill Americans to get their hands on 'weapons of war'

President Obama on Saturday renewed his call to ban so-called assault weapons, in the aftermath of the Florida nightclub shooting and other recent terror attacks on U.S. soil.

“Being tough on terrorism -- particularly the sorts of homegrown terrorism that we’ve seen now in Orlando and San Bernardino -- means making it harder for people who want to kill Americans to get their hands on assault weapons that are capable of killing dozens of innocents as quickly as possible,” Obama said in his weekly radio address. “That’s something I’ll continue to talk about in the weeks ahead.”

The president stayed silent on the assault-weapon issue in public remarks immediately after the attack early Sunday at a gay nightclub in Orlando, Fla., in which 49 people were killed and dozens more were wounded.

However, he returned to the ban issued Tuesday in a fiery speech in which he also defended his decision not to use the term “radical Islam” when referring to Islamic terrorists.

The Orlando gunman, Omar Mateen, a self-radicalized Muslim who pledged his allegiance to the Islamic State terror group, used a handgun and a Sig Sauer MCX assault rifle in the massacre.

Congress in 1994 passed a ban on semi-automatic weapons like the one Mateen used inside Pulse Nightclub in Orlando. However, the ban expired in 2004.

An effort in Congress led by Senate Democrats and pushed by Obama after the 2012 mass shooting inside a Newtown, Conn., elementary school to reinstate the ban ended in bitter defeat.

"Every time I think about those kids, it gets me mad," Obama said earlier this year when announcing his own efforts, through executive action, to tighten gun control.

On Thursday, they forced a vote on four measures.

None addresses the issue of semi-automatic weapons and are expected to fail, considering Democrats in the GOP-controlled chamber would need votes from Republican senators and the political might of the National Rifle Association. The vote is expected Monday.

The NRA lobby is already gearing up for the fight over Second Amendment rights, releasing a 5-minute-long video this weekend featuring a Navy SEAL veteran named Dom Raso.

“Let me say something to every political hack pretending to know an AR-15 from a double-barrel shotgun, in the wake of the Orlando attack,” Raso says. “For the vast major of people I work with, there is nothing better to defend their homes against realistic threats than with an AR-15 semi-automatic.”

Donald Trump has been endorsed by the NRA, but the presumptive GOP presidential nominee told Fox News on Wednesday that he wants to meet with the group to discuss barring people on the terrorism watch list from buying guns.

About 71 percent of Americans, including eight out of 10 Democrats and nearly six out of 10 Republicans, favor at least moderate regulations and restrictions on guns, according to a Reuters/Ipsos poll conducted from Monday to Thursday. That was up from 60 percent in late 2013 and late 2014.

Two of the four Senate proposals are from Democrats and would allow the government to prevent terrorist suspects from buying guns and expand background checks to online and gun-show purchases.