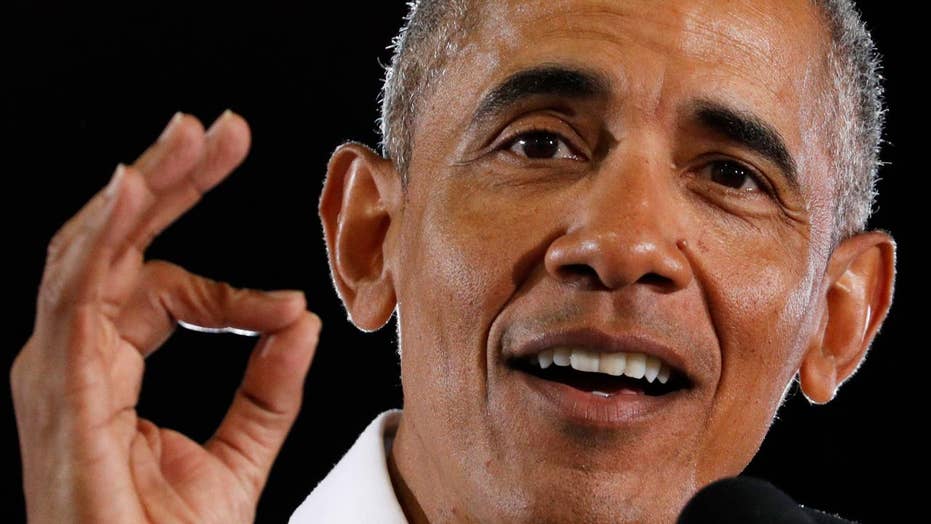 Former President Barack Obama is back in the political arena, announcing a new initiative to combat partisan gerrymandering — though Republicans say the efforts are really about helping Democrats.

The "Redistricting U" program, which is part of the "All on the Line" campaign, aims to recruit and train individuals to take up the fight against drawing congressional districts based on partisan interests.

“Training is at the heart of organizing. It’s why I’ve always made it a priority — from my 2008 campaign until now," Obama tweeted Monday. "And it’s why I’m proud to announce @allontheline’s in-person training initiative, Redistricting U."

Republicans, though, have accused Democrats of making it sound like they want fairness — when in reality they are hoping to place their party in a better position.

“If anyone tells you that @EricHolder is ‘fighting against gerrymandering’ and for ‘fair maps,’ just look at the form his organization filed with the IRS,” former Wisconsin Gov. Scott Walker tweeted last week. “The truth: their mission is to ‘FAVORABLY POSITION DEMOCRATS FOR THE REDISTRICTING PROCESS.’”

According to "All on the Line's" website, "Redistricting U" will be “sending dedicated trainers to cities across the country to train volunteers, give them the tools to impact the redistricting process in their state, hear from them on how to best make change in their communities, and empower them to be leaders in the movement for fair maps.”

The organization is focused on impacting the redrawing of congressional districts, which will take place in 2021 following the collection of data in the 2020 census. They warn against “rigged electoral maps drawn with surgical precision by politicians to preserve their party’s political power and silence the will of the people.”

Partisan gerrymandering was a hot topic in the spring, when the Supreme Court declined to weigh in on the issue, determining in a ruling in two cases that the judiciary should not get involved because it is a political issue best left to lawmakers.

One of the Supreme Court cases, Benisek v. Lamone, involved North Carolina, where Republicans had benefited from gerrymandering. "All on the Line" identified North Carolina as one of 10 “priority states,” along with Arizona, Colorado, Florida, Georgia, Michigan, Ohio, Pennsylvania, Texas, and Wisconsin.

OBAMAS PLACED AN OFFER ON 'MEGA-EXPENSIVE' ESTATE IN MARTHA'S VINEYARD

Not on that list is Maryland, where Democrats had been accused of unfairly drawing district maps at the expense of Republicans in the Supreme Court’s other partisan gerrymandering case, Rucho v. Common Cause.

Since leaving office in January 2017, Obama has largely stayed out of the political limelight, though he has occasionally weighed in on political issues, like gun control. He has been known to enjoy the perks of his post-presidency: it was reported last week that the Obamas placed an offer on a 29-acre estate in Martha's Vineyard that had been listed at nearly $15 million.

The 44th president also recently made headlines in relation to the 2020 Democratic race in a recent New York Times report that revealed he may have tried to talk former Vice President Joe Biden out of seeking the presidency. Obama has not endorsed Biden in the race.

"You don’t have to do this, Joe, you really don’t," Obama reportedly told Biden in early 2019. Biden had been leading the Democratic pack in primary polls, but lately has been sharing the lead with Sens. Elizabeth Warren, D-Mass., and Bernie Sanders, I-Vt.