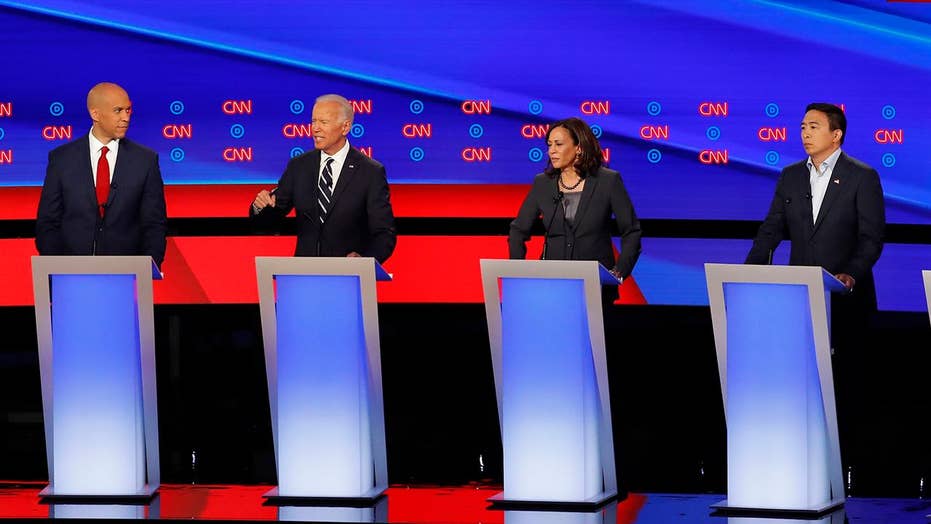 2020 HOPEFULS DEFEND THEIR OBAMA-ERA CRITICISMS
Politico: “Sens. Cory Booker and Kamala Harris on Thursday defended their criticisms of former Vice President Joe Biden at Wednesday night's Democratic primary debate, arguing that the presidency of former President Barack Obama, who remains wildly popular among Democrats, is not above criticism. … While there was virtually no criticism of Obama by name, attacks on his record were directed regularly at Biden… Booker argued that no politician, no matter how well-liked, should be above reproach. Asked in an interview on MSNBC’s ‘Morning Joe’ whether it ‘made sense’ for Democrats to be carping about Obama’s tenure instead of President Donald Trump, Booker insisted that the intra-party criticism should not be out of bounds. … [Harris’] criticisms of Obama were rooted more in her desire to replace the Affordable Care Act with a transition to a Medicare for All-style health care plan… [In] an interview on CNN’s ‘New Day,’ Booker framed his critiques as mere tough love, and had even more praise for the former president…”

Kraushaar: Democrats rebuke Obama’s legacy at their own peril - National Journal: “Any Democrat watching the last two nights of presidential debates would be struck by the absence of praise for the party’s most popular president in memory: Barack Obama. Aside from Joe Biden, none of the 20 candidates on the debate stage had many fond memories of the legacy of the man that no Democrats dared criticize during his eight years in office. That’s political malpractice. When President Obama has become too conservative for the Democratic Party is the day the Democratic Party has lost touch with mainstream America. And it’s why Biden, one of the few candidates to proudly tout his associations with the former president, came out on top Wednesday night. As former Obama Attorney General Eric Holder warned after the two-day debate extravaganza: ‘To my fellow Democrats. Be wary of attacking the Obama record.’ … That this needs to be explained is incredible.”

Edward-Isaac Dovere: The Democratic primary is right back where it started - Atlantic: “There’s an elevated train [in Detroit], in the city’s downtown, called the People Mover. … It’s a lot like the Democratic primary, after two rounds of formal debate and seven months of campaigning. There have been flashes of dynamism in the campaign so far, candidates who’ve popped for a news cycle or two. But take a step back, and the race has barely changed since before the weather grew warm. Former Vice President Joe Biden is the front-runner in every poll, but he’s a weak front-runner… Senator Bernie Sanders of Vermont is holding on to his core voters, but he doesn’t seem to be expanding their ranks. Senator Elizabeth Warren of Massachusetts; Senator Kamala Harris of California; and South Bend, Indiana, Mayor Pete Buttigieg are always in the mix in third or fourth place. And then there’s everyone else… The only major change is that former Representative Beto O’Rourke of Texas, a onetime front-runner, is now firmly a part of the latter tier.”

On to the next debate - NYT: “The Democratic National Committee has set stricter criteria for the third set of debates, which will be held on Sept. 12 and Sept. 13 in Houston. If 10 or fewer candidates qualify, the debate will take place on only one night. Candidates will need to have 130,000 unique donors and register at least 2 percent support in four polls. They have until Aug. 28 to reach those benchmarks. These criteria could easily halve the field: The first two sets of debates included 20 of the 24 candidates, but a New York Times analysis of polls and donor numbers shows that only 10 to 12 candidates are likely to make the third round. Seven candidates have already met both qualification thresholds and are guaranteed a spot on stage. They are: Former Vice President Joseph R. Biden Jr., Senator Cory Booker … Mayor Pete Buttigieg … Senator Kamala Harris … Beto O’Rourke … Senator Bernie Sanders [and] Senator Elizabeth Warren…”

THE RULEBOOK: PREPAREDNESS IS KEY
“No form of government can always either avoid or control [mortal feuds]. It is in vain to hope to guard against events too mighty for human foresight or precaution, and it would be idle to object to a government because it could not perform impossibilities.” – Alexander Hamilton, Federalist No. 16

TIME OUT: LET THE MUSIC PLAY
History: “On this day in 1981, MTV: Music Television goes on the air for the first time ever, with the words (spoken by one of MTV’s creators, John Lack): ‘Ladies and gentlemen, rock and roll.’ The Buggles’ ‘Video Killed the Radio Star’ was the first music video to air on the new cable television channel, which initially was available only to households in parts of New Jersey. MTV went on to revolutionize the music industry and become an influential source of pop culture and entertainment in the United States and other parts of the world, including Europe, Asia and Latin America, which all have MTV-branded channels. In MTV’s early days, its programming consisted of basic music videos that were introduced by VJs (video jockeys) and provided for free by record companies. As the record industry recognized MTV’s value as a promotional vehicle, money was invested in making creative, cutting-edge videos.”

I’LL TELL YOU WHAT: MASSACHUSETTS IS ONE PLACE I’VE SEEN
While Chris Stirewalt is on vacation, Dana Perino is joined by a duo of Bay Staters, Mary Anne Marsh, former adviser to John Kerry and Colin Reed, former campaign manager for Senator Scott Brown and spokesperson for New Jersey Governor Chris Christie. They recap night one of the Democratic primary debates and preview what's to come in night two. Plus, some Massachusetts-centric trivia for Mary Anne and Colin. LISTEN AND SUBSCRIBE

SENATE PASSES BIPARTISAN SPENDING BILL, AVOIDS SHUTDOWN
Fox News: “The Senate passed a budget and debt limit deal on Thursday that the Trump administration and leaders from both parties agreed to, but left hardline fiscal conservatives worried for the future. The legislation increases spending caps and suspends the debt ceiling, allowing for more government borrowing until July 31, 2021 – after the next presidential election. The measure, once signed by the president, would permit the government to resume borrowing to pay all its bills and would set an overall $1.37 trillion limit on agency budgets approved by Congress annually. It also would remove the prospect of a government shutdown in October and automatic spending cuts. … Many conservatives were torn between supporting the president and risking their political brand with an unpopular vote to add such a tremendous sum to the government’s credit card. Senate Majority Leader Mitch McConnell, R-Ky, supported the deal, along with other establishment leaders including Senate Minority Leader Chuck Schumer, D-N.Y., and House Minority Leader Rep. Kevin McCarthy, R-Calif.”

Senate confirms 13 Trump judges before recess - The Hill: “The Senate confirmed 13 of President Trump's judicial picks this week, helping clear the deck ahead of the five-week August recess. The nominees were split up throughout the week with four confirmation votes taking place on Tuesday and nine on Wednesday, three of which were by voice votes. … Republicans have placed a premium on confirming Trump's judicial picks, arguing that they are the best shot at having a long-term impact on the direction of the country. … The confirmation of 13 nominees is down from the 19 judges Senate Republicans had planned to confirm before leaving Washington until September. The other judges are expected to get a vote once the Senate returns in September.”

DEMS, DOJ REACH AGREEMENT FOR MUELLER EVIDENCE
Politico: “House Democrats weighing the impeachment of President Donald Trump have agreed to a two-month schedule of court filings with the Justice Department in an effort to obtain special counsel Robert Mueller’s grand jury material. Democrats on the House Judiciary Committee, who say accessing Mueller’s files is necessary to determine whether they will ultimately recommend articles of impeachment against Trump, agreed to the timetable, which would likely result in an October ruling. Though that’s a reasonable pace for legal argumentation, it’s sure to frustrate Democrats agitating for Trump’s impeachment, who have argued that the closer their effort gets to presidential primary season, the more impractical it becomes. … Under the schedule, jointly proposed by the committee and Justice Department, department lawyers would file their first brief in the matter by Sept. 13 and the Judiciary Committee would reply by Sept. 30. Justice Department officials said they expected no oral argument would be necessary in the case, but it’s up to the judge — Chief U.S. District Court of the District of Columbia Judge Beryl Howell — to decide.”

Kelly Craft confirmed to become next US ambassador to UN - AP

AUDIBLE: HOMEWARD BOUND
“All of us want to get back to where there’s a lot of sanity. And that’s back home.” – Sen. Mike Rounds, R-S.D., talking about the upcoming August recess per Politico.

WANTED: ENO THE EMU
AP: “Officials in North Carolina are looking for an emu on the loose that was last spotted jumping on the hood of a car before running away. News outlets report that officials say the emu, nicknamed ‘Eno,’ was sighted over the weekend. Orange County Animal Services spokesperson Tenille Fox says it’s believed to be in the Hillsborough area. An Orange County government Twitter account posted an emu’s mugshot Friday with the word ‘wanted’ in red letters. Officials say it’s been on the run for about five weeks. They don’t know where the flightless bird escaped from. Fox says people shouldn’t try to catch it, but instead call animal services. Fox says owning emus is legal in Orange County. She says they’re often kept on farms and don’t usually run away.”

AND NOW, A WORD FROM CHARLES…
“Jews are news. It is an axiom of journalism. An indispensable axiom, too, because it is otherwise impossible to explain why the deeds and misdeeds of dot-on-the-map Israel get an absurdly disproportionate amount of news coverage around the world.” – Charles Krauthammer (1950-2018) writing for Time magazine on Feb. 26, 1990.