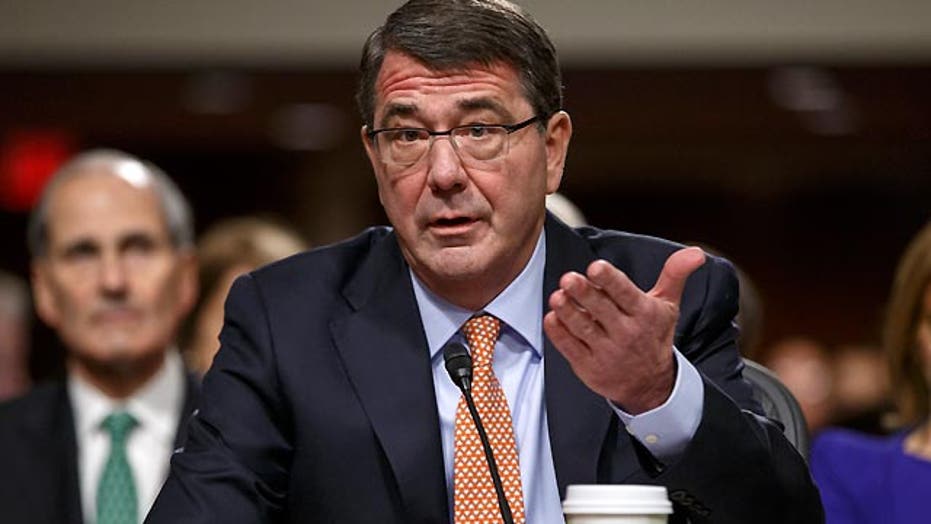 Is Obama's pick ready to be defense secretary?

Ashton Carter appears to struggle to explain the White House plan to withdraw US troops from Afghanistan and strategy against ISIS. Sen. Lindsey Graham weighs in

A day after President Obama's defense pick struggled to explain the administration's ISIS strategy, Capitol Hill lawmakers on both sides of the aisle are upping pressure on the White House to give Jordan's military what it needs to strike back at the Islamic State.

At the Senate hearing on Wednesday, secretary of defense nominee Ashton Carter told Sen. John McCain, R-Ariz., he "absolutely" believes the U.S. needs an ISIS strategy. But when asked to define it in specific terms, Carter responded in generalities.

"I think the strategy connects ends and means," Carter said. While calling for the Islamic State's defeat, Carter said the strategy in Iraq is to continue to "strengthen" Iraq's security forces. "On the Syria side," he said, "our strategy is to try to build the forces to keep them defeated."

McCain retorted: "Well, it doesn't sound like a strategy to me, but maybe we can flesh out your goals."

McCain and the rest of the members of the Senate Armed Services Committee later urged the administration to do more -- specifically, to help Jordan in its own military campaign after a captured Jordanian pilot was burned alive by the Islamic State.

Jordan's King Abdullah II has vowed to strike back, and already has launched airstrikes against ISIS over Syria in response. Reports from the Middle East said the latest strikes killed 55 members of ISIS, including a senior commander known as the "Prince of Nineveh."

According to U.S. lawmakers who met with Abdullah on Capitol Hill on Tuesday, the king has asked for more military assistance from the U.S.

"They literally need ammo, bombs, and they need fuel," Rep. Duncan Hunter, R-Calif., told Fox News on Thursday. He urged the Pentagon to embed troops with the Jordanian military and other fighting forces, so they could help call for U.S. airpower as needed.

Hunter also sent a letter to Obama on Thursday urging "full support" for Jordan. He complained that the administration denied a license request for unarmed Predator drone platforms, and urged officials to reverse that decision "immediately."

House Democratic Leader Nancy Pelosi also said Thursday the administration should "move quickly to give more capacity to the Jordanians."

Republicans and Democrats alike are pressing the Obama administration to move swiftly to provide aircraft parts, night-vision equipment and other weapons to Jordan.

In the letter from members of the Senate Armed Services Committee to Secretary of State John Kerry and Defense Secretary Chuck Hagel, they said Jordan's situation and the unanimity of the coalition battling the extremists "demands that we move with speed to ensure they receive the military materiel they require."

In the current year, the United States is providing Jordan with $1 billion in economic and military assistance. The Defense Department is also giving an unspecified amount of help to Jordan to secure its border with Syria. Islamic militants have grabbed significant swaths of territory in Syria and Iraq.

The senators said Abdullah expressed his gratitude for the U.S. aid, but "we were concerned to hear from the king that Jordan is experiencing complications and delays in obtaining certain types of military equipment through our foreign military sales system."

"Specifically, Jordan is seeking to obtain aircraft parts, additional night vision equipment and precision munitions that the king feels he needs to secure his border and robustly execute combat air missions into Syria," the senators wrote.

At the White House, Press Secretary Josh Earnest said the administration would consider any aid package put forward by Congress, but that the White House would be looking for a specific request from Jordan's government.