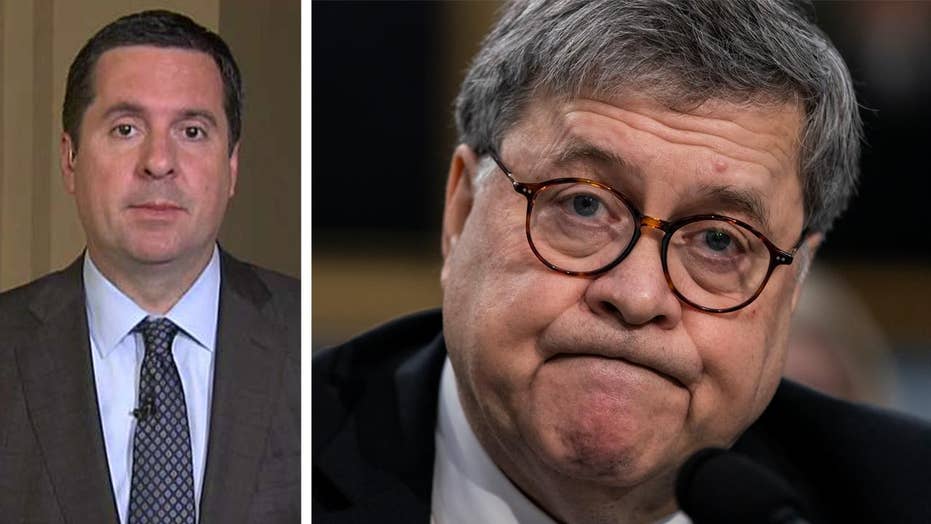 House Intelligence Committee ranking member Devin Nunes reacts to the Justice Department reviewing the conduct of the investigation into the Trump campaign and explains legal action he's taking against news outlets for 'defamation.'

The ranking Republican on the House Intelligence Committee said he and Republican Rep. John Ratcliffe are prepared to brief Barr on alleged misconduct during the FBI’s investigation into Russian meddling and contacts with Trump advisers during the 2016 campaign.

FBI CLASHED WITH DOJ OVER POTENTIAL 'BIAS' OF SOURCE

The referrals stem from the investigation conducted by the House Intelligence Committee when Republicans held the House majority.

“As part of that investigation, Committee Republicans identified several potential violations of law,” Nunes, R-Calif., wrote in a brief letter to Barr on Thursday.

The notification comes after Barr testified to Congress this week that he is reviewing the “conduct” of the original FBI investigation. During the second of two Capitol Hill appearances on Wednesday, Barr said he believes “spying did occur,” and the question is “whether it was adequately predicated.” 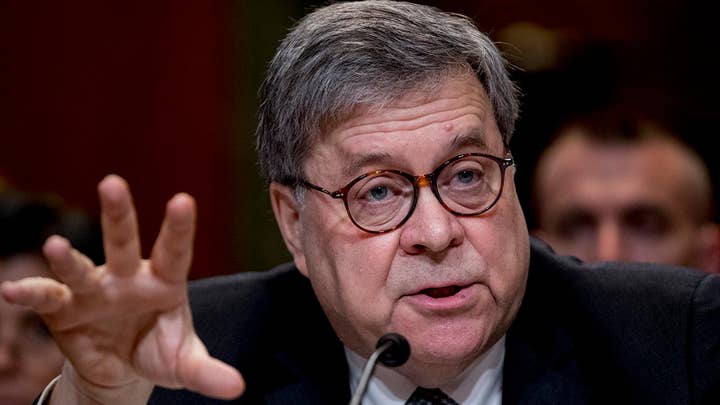 Amid criticism from Democrats who accused him of playing into President Trump’s “deep state” rhetoric, Barr stressed that he just wants to make sure “there was no unauthorized surveillance.”

Nunes has been looking into such surveillance and other issues for months. In his letter Thursday to Barr, Nunes said he would have his staff arrange a time for him and Ratcliffe, R-Texas, to “brief you directly on eight criminal referrals.”

The letter did not provide further details on what the referrals will allege but the congressman previously told Fox News the referrals include two for conspiracy, as well as for “global leaks” and for lying, misleading or obstructing congressional investigators.

The step comes as Republicans have pushed for the release of key documents to uncover the origins of the accusations that the Trump campaign colluded with the Russian government. According to a summary of the now-completed Robert Mueller probe, that investigation did not uncover evidence of collusion. Trump recently told Fox News he would release the entirety of the FISA applications used to surveil one of his top aides, and other related documents.

Nunes earlier told Fox News' "Sunday Morning Futures" that he has been working on the referrals for more than two years, and wanted to wait until Barr’s confirmation.

Nunes asserted that "we've had a lot of concerns with the way intelligence was used" during the Trump-Russia probe.

Redacted versions of FISA documents already released have revealed that the FBI extensively relied on documents produced by Christopher Steele, an anti-Trump British ex-spy working for a firm funded by the Hillary Clinton campaign and Democratic National Committee (DNC), to surveil Trump aide Carter Page. The FISA application did not clearly state that the firm was funded by the Clinton team and DNC.

Further, just nine days before the FBI applied for the FISA warrant to surveil Page, officials were battling with a senior Justice Department official who had "continued concerns" about the "possible bias" of a source pivotal to the application, according to internal text messages obtained by Fox News in March.