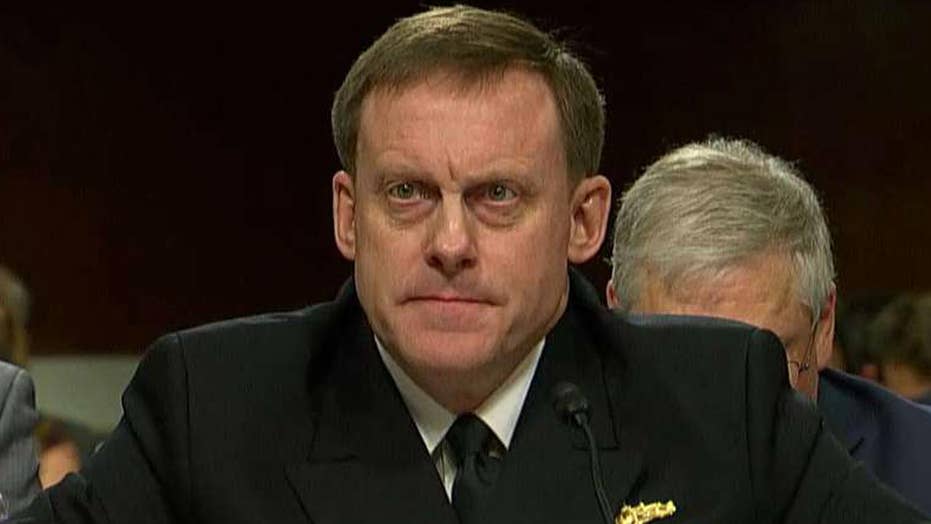 NSA Director Adm. Mike Rogers cast a dash of doubt Tuesday on the intelligence community's conclusion that Russia-tied hackers sought to help Donald Trump in the 2016 election, explaining for the first time in public testimony why his agency had only "moderate confidence" in that judgment.

Testifying before a Senate Armed Services Committee hearing, Rogers affirmed he and the NSA were highly confident the Russians sought to hurt Hillary Clinton in the election. But Sen. Tom Cotton, R-Ark., asked Rogers – who also heads U.S. Cyber Command -- why the NSA differed on the related conclusion about Trump in the Jan. 6 intelligence report on alleged Russian interference in the election.

That conclusion stated that the Russian government “aspired to help President-elect Trump’s election chances when possible by discrediting Secretary Clinton and publicly contrasting her unfavorably to him.”

The FBI and CIA backed that with high confidence, but the NSA only held that judgment with “moderate confidence.”

“I wouldn’t call it a discrepancy, I’d call it an honest difference of opinion between three different organizations and in the end I made that call,” Rogers said.

He noted that he still agreed with the judgment, but he wasn’t at the same confidence level as CIA Director John Brennan and FBI Director James Comey.

The FBI, CIA and NSA were all in complete agreement about the Clinton-related conclusion in the report, which stated: “Russian President Vladimir Putin ordered an influence campaign in 2016 aimed at the US presidential election. Russia’s goals were to undermine public faith in the US democratic process, denigrate Secretary Clinton, and harm her electability and potential presidency.”

Earlier at Monday's hearing, Rogers also testified that there has been no reduction in Russian efforts to affect the outcome of other countries' elections, and warned about the dangers of state and non-state actors moving from data "extraction" to data "manipulation."

Chairman John McCain, R-Ariz., asked Rogers if he had seen a reduction in Russian efforts to meddle in elections – and pointed toward alleged interference in Sunday’s French presidential race.

“No I have not,” Rogers said, adding that U.S. needs to publicly “out” Russian behavior.

“They need to know we will publicly identify this behavior,” he said.

Emmanuel Macron, the eventual winner of the French election, was hit by a hack Friday which revealed a number of his campaign team's emails. It was not clear who was behind the hack, but it was reminiscent of hacks that hit the 2016 U.S. election that exposed Democratic National Committee staff emails, and the private emails of Clinton campaign Chairman John Podesta. Both the Clinton campaign and the Obama administration have blamed Russia for those hacks.

Rogers was also asked by lawmakers to lay out his “worst-case scenario” for future cyber attacks. Rogers said he was concerned about “outright destructive activity on critical infrastructure” as well as cyberattacks moving from the obtaining and revealing data to “data manipulation on a massive scale.”

“Yes,” said Rogers. “That’s a very different kind of challenge for us.”

He also warned about a possible situation in which, as the effectiveness of cyberattacks becomes clearer, “non-state actors decide cyber is an attractive weapon with which to destroy the status quo.”

During further questioning, Rogers said the National Security Agency became aware of Russian attempts to interfere with political institutions in the summer of 2015.

He said that when he came aware of Russian actions, he informed the FBI, and also in his role as head of the U.S. Cyber Command, informed the Pentagon to make sure its systems were optimized in order to be able to withstand such an attack.