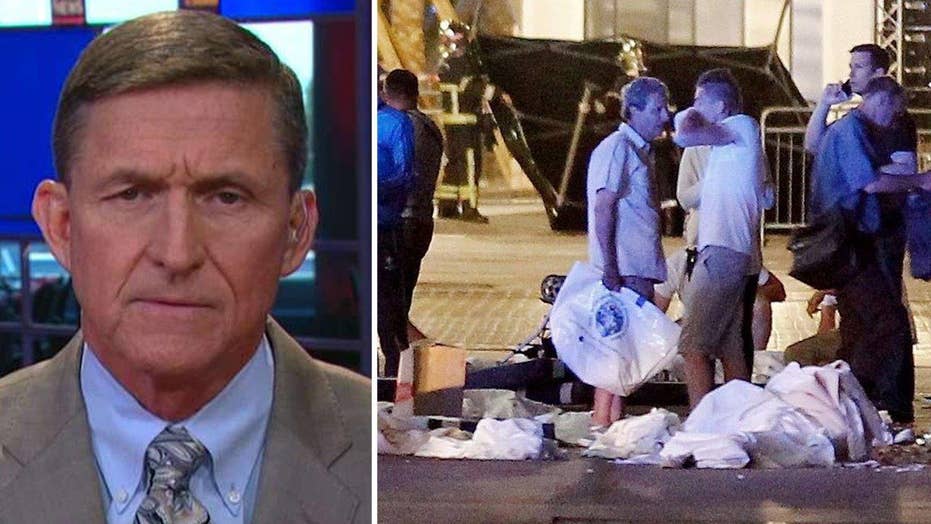 Flynn: Terror can be dealt with; there's a strategy to win

The brazen terror attack in France – this time by a driver mowing down civilians, including two Americans, who had been watching fireworks in the seaside destination of Nice – renewed warnings Friday about the growing threat not only to Western Europe but the U.S. homeland.

Even before the attack, top U.S. security and intelligence officials were issuing a steady drumbeat of warnings about groups like the Islamic State aiming to hit western targets, part of what House Homeland Security Committee Chairman Mike McCaul called Thursday an “unprecedented wave of terror.”

Following U.S. terror attacks in San Bernardino and most recently Orlando – coupled with attacks over just the last few weeks in Istanbul, Baghdad, Dhaka and Medina – U.S. officials see a spreading threat that must be confronted, differently than it is now.

“We have to stop this,” retired Lt. Gen. Michael Flynn told Fox News on Friday morning.

The Obama administration has taken a stay-the-course approach after recent attacks, voicing confidence that the military alliance striking at the heart of ISIS in Iraq and Syria, coupled with aggressive intelligence-gathering and prosecutions in the U.S., is making progress against the enemy.

But Flynn and others want to see changes, not only in how the Obama administration describes the enemy – Flynn used to serve in Obama’s Defense Intelligence Agency and has since become an outspoken critic of the president’s reluctance to label the threat “radical Islam” – but in the overall strategy.

Flynn urged the U.S. to bring together what he called a “new 21st Century alliance” uniting leaders of the Muslim world with the rest of the international community.

“I’m scared about this enemy,” he said.

Fox News military analyst and retired Gen. Jack Keane lamented that NATO has not declared war on ISIS despite four NATO countries coming under attack. He said it’s not enough to “pat ourselves on the back” for taking back some territory, since the group’s affiliates are expanding.

“We must take all that territory away from ISIS,” Keane said.

Rep. Peter King, R-N.Y., in an interview with Fox News, renewed calls for increased surveillance, including on the American Muslim community.

Further, he said the FBI simply “does not have the personnel to be constantly investigating,” and urged the bureau to hand off tips to local police when they have inconclusive leads.

“[The police] are the ones who have the informants. They have the sources. They have people on the ground,” King said. “We can't be shutting down investigations.”

Just hours before the Nice attack, FBI Director James Comey testified on the growing global threat from ISIS. While there was no immediate claim of responsibility for the Nice attack, two sources told Fox News that accounts linked to ISIS were “celebratory.”

Speaking before McCaul’s committee, Comey said the U.S. and its allies must stay vigilant, as ISIS moves its focus away from the Iraq and Syria battlefield, and operatives spread out.

“We all know, there will be a terrorist diaspora out of the caliphate as military force crushes the caliphate,” Comey said. “Those thousands of fighters are going to go someplace. Our job is to spot them and stop them before they come to the United States to harm innocent people.”

CIA Director John Brennan similarly warned last month that ISIS likely will “intensify” terror attacks around the world even as its core fighters come under pressure in Iraq and Syria.

As FoxNews.com reported last month, new congressional files show the U.S. has faced a steady terror threat over the last several years. The documents revealed that since early 2014, at least 131 individuals were identified as being implicated in terror. And for the period September 2001 through 2014, the U.S. successfully prosecuted 580 individuals for terrorism and terror-related cases, records show.

Comey stressed at the hearing Thursday, “We can't take our eye off of what the next move will be by these killers.”

Former House Speaker Newt Gingrich, who like Flynn had been under consideration for the role of Donald Trump running mate, called for tough and controversial measures Thursday night to confront the terror threat.

“Western civilization is in a war,” Gingrich said, before going so far as to say the U.S. should “test” Muslims in America, and, “If they believe in Sharia, they should be deported.”

He also said the U.S. should make it a felony to host or visit pro-ISIS or pro-Al Qaeda websites, among other measures.

“We are in a war,” Gingrich said. “We had better rethink the rules or we are going to lose the war.”