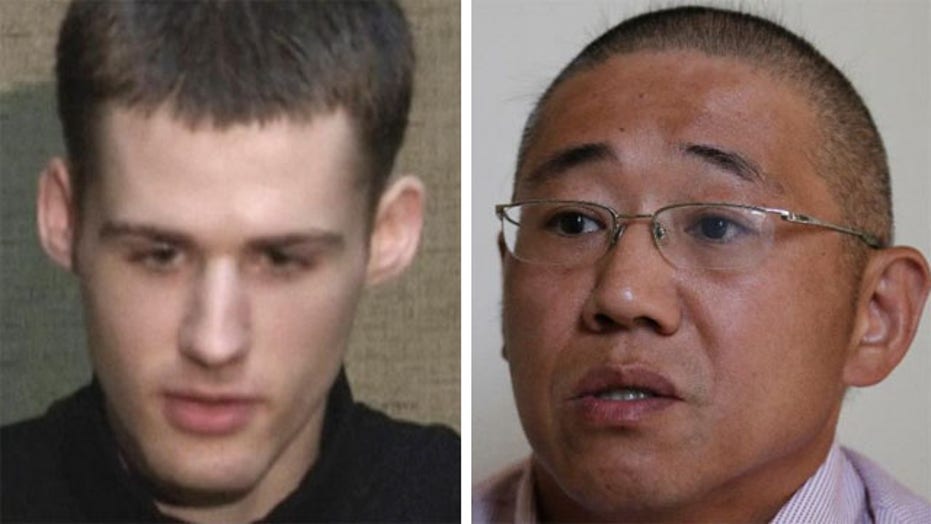 U.S. prisoners freed from North Korea back on American soil

The problem is just the latest issue with the Air Force's fleet of Boeing jets. Similar incidents have plagued Secretary of State John Kerry in recent months, forcing him to fly commercially in at least two instances. But none of those delays have hampered such a sensitive diplomatic mission.

Clapper left Washington at 2 a.m. Tuesday on a C-40 aircraft and had expected to be in North Korea on Thursday, the officials said. But they said the breakdown forced him to spend a day and a half in Hawaii while the plane was repaired. He then flew to Guam and on to Pyongyang, they said. The officials spoke on condition of anonymity because they were not authorized to speak publicly about it.

Clapper did not arrive in North Korea until late Friday. He left with Americans Kenneth Bae and Matthew Miller on Saturday, a day later than planned. An intelligence official said there was no indication that North Koreans had a problem with the unanticipated delay in Clapper's arrival.

If the plane had broken down in North Korea, however, it would have posed considerable logistics problems. The U.S. military maintains large bases nearby in South Korea and Japan.

The C-40 that Clapper took to North Korea resembles a Boeing 737-700. The aircraft is part of the 89th Airlift Wing, based at Joint Base Andrews in Maryland, and is one of 11 owned by the Air Force and used for VIP flights, including Cabinet members. The C-40s were first deployed in 2003.

According to the Air Force, the planes have problems or a breakdown that prevents flying 6 percent of the time they're used.

The C-40s are a bit smaller than the military's C-32 aircraft, which is similar to the Boeing 757-200 and is more frequently used by Cabinet members, including Kerry and Defense Secretary Chuck Hagel, and Joint Chiefs Chairman Gen. Martin Dempsey.

Air Force Capt. Erika Yepsen said the Air Force has four C-32s and they have 94.4 percent "mission capable" rate for this year.

But those jets have had a recent history of high-profile breakdowns.

In October, for the fourth time this year, Kerry's C-32 broke down in Vienna, forcing him to fly home commercially from a diplomatic mission for the second time in three months. In August, he flew home commercially from Hawaii at the end of a round-the-world trip due to a plane issue. Two earlier incidents, in Switzerland in January and in Britain in March, were resolved with minor delays to his schedule.

Last month, Hagel took off for South America only to have to turn around and return to Joint Base Andrews so a malfunction could be fixed before taking off again for Colombia.

"There's no question it presents technical logistical challenges," State Department spokeswoman Jen Psaki said of the breakdowns. "But obviously we do the best we can to make adjustments where needed."

Problems with the Air Force fleet that ferry America's top officials aren't new, and secretaries of state have long complained about the aircraft they must fly for official business. Some have joked about being envious of foreign colleagues who have newer, more efficient and more luxurious planes.

Former Secretary of State Hillary Rodham Clinton encountered several aviation breakdowns when she was in office, including a tire that burst on landing in the United Arab Emirates, leading to an unscheduled overnight stay in Dubai. But she never had to resort to flying commercially.