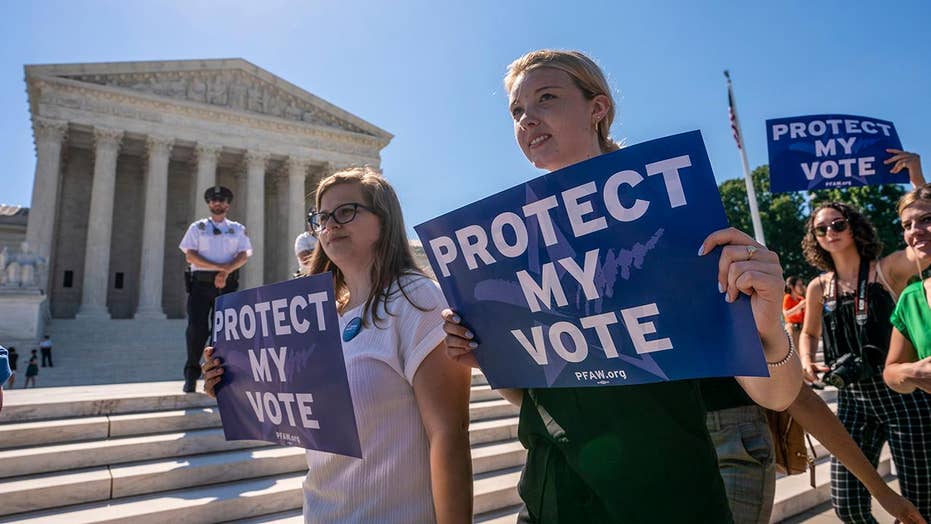 The left warns of long-term electoral impact of Supreme Court's decisions on gerrymandering, the census

Both the census and the way individual congressional districts are crafted can change the balance of power on Capitol Hill; Shannon Bream, Fox News chief legal correspondent and anchor of 'Fox News @ Night,' reports.

A panel of state judges in North Carolina blocked the state's GOP-friendly congressional map from being used in the 2020 elections, ruling that voters had a strong likelihood of winning a lawsuit that argued Republicans unlawfully manipulated district lines for partisan gain beyond any reasonable doubt.

The lawsuit was brought by North Carolina voters backed by the National Redistricting Foundation, part of a comprehensive national operation led by former Attorney General Eric Holder intended to make district lines more friendly to Democrats before the 2020 elections and the pivotal 2021 redistricting.

The ruling came just months after the Supreme Court punted the partisan fight over gerrymandering to state courts this summer, saying it was not an issue for federal courts to decide regardless of the circumstances.

In September, after that go-ahead from the Supreme Court, North Carolina state judges quickly struck down state House and Senate districts. They found extreme political manipulation of the district lines, similar to what voters suing over the congressional map also said had occurred.

In the ruling Monday, the judges — Paul Ridgeway, Alma Hinton and Joseph Crosswhite — agreed that "there is a substantial likelihood that plaintiffs will prevail on the merits of this action by showing beyond a reasonable doubt that the 2016 congressional districts are extreme partisan gerrymanders" in violation of the North Carolina Constitution.

In this July 26, 2017 photo, a member of the gallery tried to display her sign while lawmakers conveneD during a joint select committee meeting on redistricting in Raleigh, N.C. North Carolina judges on Monday blocked the state's congressional map from being used in the 2020 elections. (AP Photo/Gerry Broome, File)

The judges gave no date by which a new map must be drawn, but they suggested lawmakers could redraw them on their own quickly to ensure that congressional primaries be held as scheduled.

The State Board of Elections has said lines needed to be finalized by Dec. 15.

"The court respectfully urges the General Assembly to adopt an expeditious process," the judges wrote.

Republican state legislators made plain when they drew that map that the lines were designed to help the GOP retain 10 of the state's 13 congressional seats, even though vote totals in the state were split roughly evenly along party lines.

But, the Republicans argued such strategies weren't unlawful -- an argument that, in the federal system, had succeeded in the Supreme Court. Republican defendants in the lawsuit and three sitting GOP U.S. House members opposed the injunction request.

"Eric Holder has been at this for years. They have this whole 'sue until blue' mentality," Walker said. "So, even a state like North Carolina where Republicans are in charge of the Assembly and the Senate -- the two Houses there -- they've gone to court and over the years they've gotten involved in Supreme Court races. So now, the liberals -- Eric Holder's team -- now [control] who is on the Supreme Court in North Carolina." 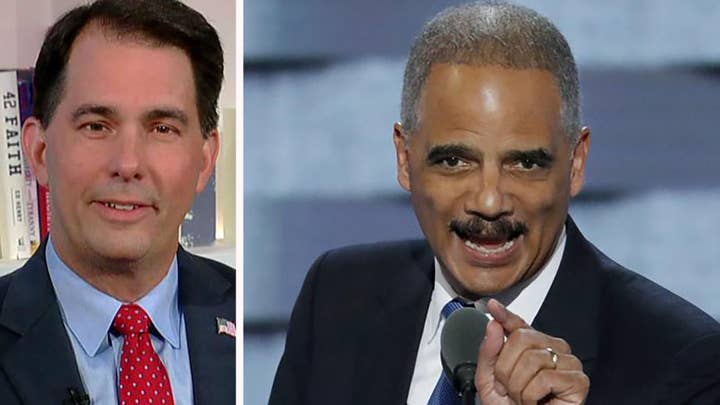 "And, after the federal government, the U.S. Supreme Court said they weren't going to get involved in this," he told "Fox & Friends." "It's now in every one of the states."

Walker asserted that "Holder's not talking about redistricting in places like Maryland, where you have the third congressional district. It's arguably the most gerrymandered district in the entire country. He's not talking about Illinois or Massachusetts. Why? Because those places benefit Democrats."

The state judges' ruling, which could be appealed, likely would lead to a map with more competitive districts for the November race — making it more difficult for national Republicans to retake control of the U.S. House.

Democrats and unaffiliated voters who sued Sept. 27 sought the injunction before any trial was held on their partisan gerrymandering claims. They said the case was extremely similar to a successful lawsuit over state legislative districts.

The same three judges hearing the congressional case ruled in that case just two months ago, finding Republicans performed extreme political manipulation in those maps to ensure they could hold majorities in almost any political environment. Republicans were ordered to redraw those lines.

Lawyers for North Carolina Republican legislators had argued there was no clear way for judges to know what kinds of map-making were unacceptable, since "redistricting is political because of what it is, not because of who does it." Any complaints about how districts were drawn would vanish if Democrats could lead some Republican voters to change their minds and voted with them, GOP lawyers said.

Also Monday, the judges issued a separate ruling in that legislative case, upholding all of the changes that the General Assembly made to several dozen state House and Senate districts. The plaintiffs who sued there had requested a third-party expert step in and rework 19 House districts.

In the current congressional lawsuit, the plaintiffs' attorneys convinced the judges that evidence already accumulated from separate federal litigation challenging the congressional lines showed they were likely to succeed in the state case.

The federal case went all the way to the Supreme Court, which decided 5-4 in June that federal courts would not get involved in partisan redistricting claims. But, the justices left the door open for state courts to intervene.

Opponents of the current congressional map have latched on to the comment made by state Rep. David Lewis during the 2016 remapping. Lewis said at the time he was proposing a 10-3 map "because I do not believe it's possible to draw a map with 11 Republicans and two Democrats." Lewis said later he was joking.

Attorneys for Lewis and other Republican lawmakers who were defendants in the state congressional lawsuit case rejected the plaintiffs' partisan gerrymandering claims. They told the judges it was too late to make congressional map changes, since candidate filing would begin in early December and the facts in the case were not settled. Any further changes, the GOP's lawyers said, would result in voter confusion and extremely low turnout should the primary have to be delayed.