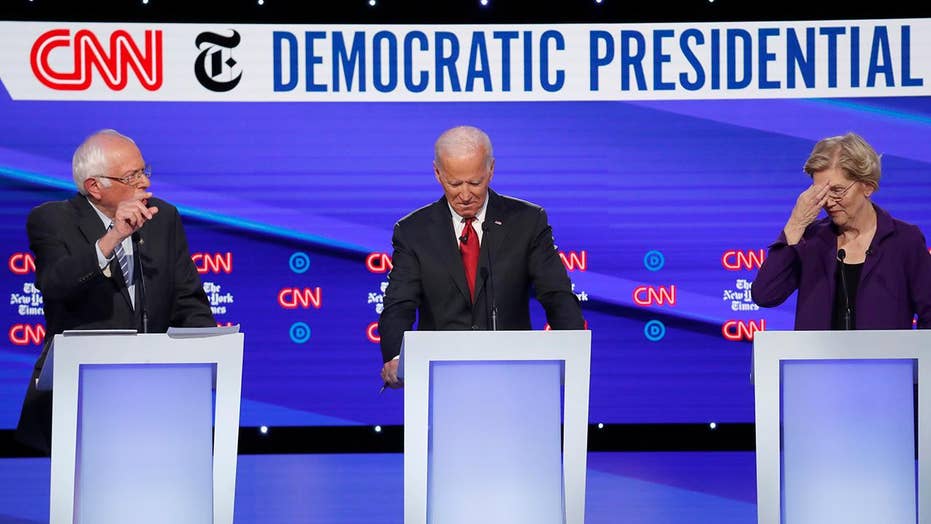 Which 2020 Democrat came out on top during the 4th presidential debate?

Democratic strategist Chuck Rocha breaks down the winners and losers of the Democratic debate.

WESTERVILLE, Ohio – If anyone needed a big night at the fourth round Democratic presidential nomination debate – it was Julian Castro.

Barely registering the polls and with less than $700,000 of campaign cash on hand, the former San Antonio, Texas mayor who later served as Housing and Urban Development secretary under President Barack Obama is facing the possibility that his appearance at the debate at Otterbein University in suburban Columbus, Ohio may well be the last time he makes the stage.

BUTTIGIEG AND O'ROURKE CLASH OVER GUNS DURING DEBATE

Castro grabbed only 8.2 minutes of speaking time at the debate – the third least amount among the record-setting 12 candidates on the stage – and didn’t score a breakout moment.

But in an interview with Fox News in the spin room following the debate, Castro vowed that he’ll fight on even if fails to make November’s cut and optimistically said he’ll qualify for the next debate.

“I’m going to keep fighting on. I believe that with hard work, we can make the next debate in Atlanta. We have about three and a half weeks to do that. So I’m going to keep working hard to get there,” he said.

Castro’s comments stand in contrast to his dire warning to supporters in a fundraising email late last week.

"I don’t say this lightly: If I don’t make the next debate stage, it will be the end of my campaign," Castro emphasized.

After the debate, it was hard to find a political pundit who praised Castro’s performance.

But asked by Fox News if his debate performance helped him in his goal to make the next debate stage, the candidate said, “I think so. It’s always a scramble for time with 12 people up there but I made the best use of the time that I did get. I was very sharp on issues that people care about and I think that will make a difference.”

And he touted on Twitter that “donations are coming in from all around the country.”

Castro also took aim at the media hosts for the debate  - CNN and the New York Times – telling reporters in the spin room and highlighting on Twitter that there were “three hours and no questions tonight about climate, housing, or immigration. Climate change is an existential threat. America has a housing crisis. Children are still in cages at our border.”