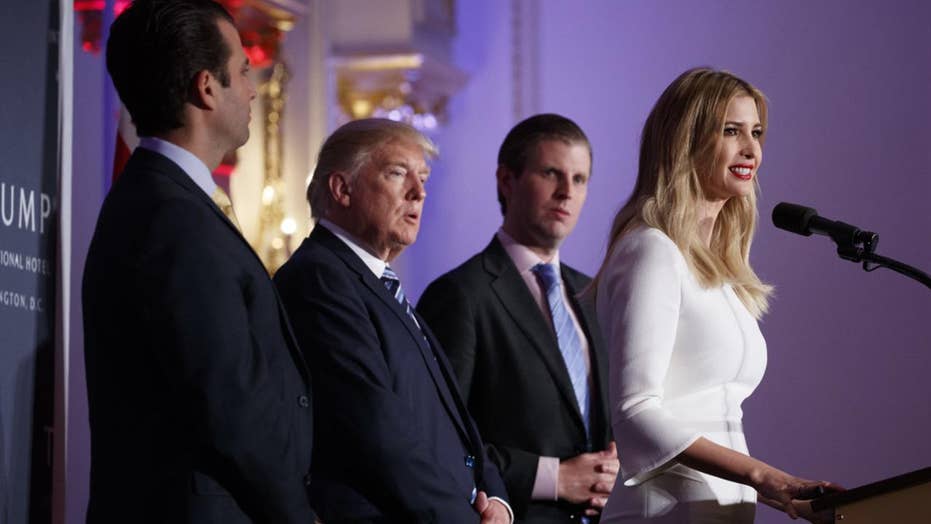 Lawsuit is looking at violations of state and federal law.

Acting Attorney General Barbara Underwood filed the lawsuit Thursday over the foundation’s alleged “persistent illegal conduct” which occurred over “more than a decade.” The suit alleges that there was “extensive unlawful political coordination” with Trump’s 2016 presidential campaign, and alleged violations of “basic legal obligations for non-profit foundations.”

But the president fired back on Twitter Thursday, blasting the lawsuit, and Schneiderman for “never” having “the guts” to bring the suit while he held the post.

“The sleazy New York Democrats, and their now disgraced (and run out of town) A.G. Eric Schneiderman, are doing everything they can to sue me on a foundation that took in $18,800,000 and gave out to charity more money than it took in, $19,200,000. I won’t settle this case!” Trump tweeted.

“Schneiderman, who ran the Clinton campaign in New York, never had the guts to bring this ridiculous case, which lingered in their office for almost 2 years. Now he resigned his office in disgrace, and his disciples brought it when we would not settle,” Trump added, moments later.

The suit claims that Trump used the foundation’s charitable assets to pay off his legal obligations, promote Trump brand hotels and businesses, and to purchase personal items. The suit also claims that the foundation “illegally provided extensive support to his 2016 presidential campaign by using the Trump Foundation’s name and funds it raised from the public to promote his campaign for presidency.”

“As our investigation reveals, the Trump Foundation was little more than a checkbook for payments from Mr. Trump or his businesses to nonprofits, regardless of their purpose or legality,” Underwood said in a statement Thursday. “This is not how private foundations should function and my office intends to hold the Foundation and its directors accountable for its misuse of charitable assets.”

Underwood initiated a proceeding to dissolve the foundation under court supervision, and obtain restitution of $2.8 million, and additional penalties, according to the attorney general’s office.

The suit also seeks to ban President Trump from future service as a director of a New York non-profit for 10 years, and ban Eric, Donald Trump Jr., and Ivanka from service for one year.

A spokesperson for the Trump Foundation, in a statement to Fox News, called the lawsuit “politics at its very worst,” noting that the foundation has donated over $19 million to charitable causes “more than it ever received.” The spokesperson also said Trump contributed himself, or through his companies, more than $8 million, noting that the organization “was able to donate more than it took in” because “it had little to no expenses.”

The spokesperson also said that the foundation “currently has $1.7 million remaining, which the NYAG has been holding hostage for political gain.”

“This is unconscionable – particularly because the Foundation previously announced its intention to dissolve more than a year and a half ago,” a spokesperson for the foundation said in a statement to Fox News. “The prior NYAG, who was recently forced to resign from office in disgrace, made it his stated mission to use this matter to not only advance his own political goals, but also for his own political fundraising.”

The spokesperson added: “The acting NYAG’s recent statement that battling the White House is ‘the most important work [she] have ever done’ shows that such political attacks will continue unabated.”

Underwood took over the investigation into the organization in May, after Schneiderman stepped down following the publication of a damning report by The New Yorker, detailing four women’s claims that he had repeatedly hit them, threatened them and demeaned them. The graphic accusations included choking a former girlfriend and demanding another, who was born in Sri Lanka and whom Schneiderman reportedly referred to as his “brown slave,” call him “Master.”

The Manhattan District Attorney opened an investigation into Schneiderman following the explosive report that prompted his stunning fall from grace.

Underwood’s lawsuit Thursday also alleged that none of the foundation’s expenditures were approved by the Board of Directors, and stated that Trump “alone made all decisions related to the Foundation.”

The attorney general’s office released an email dated Jan. 29, 2016 from former Trump campaign manager Corey Lewandowski, which requested that the foundation “make some disbursements this week while in Iowa.”

The attorney general’s office said that, following that email, at least five $100,000 grants were made to groups in Iowa in the days before the February 1, 2016 Iowa caucuses.

Lewandowski did not immediately respond to Fox News’ request for comment.