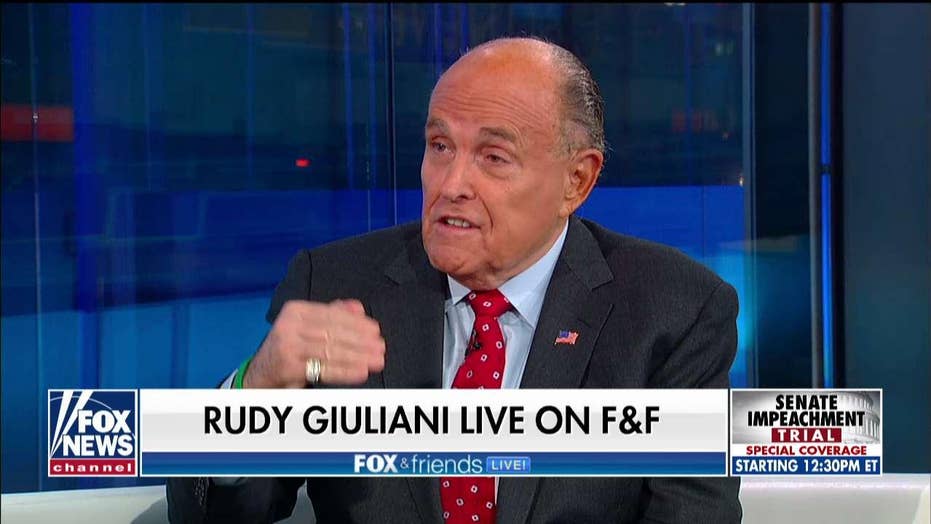 The Ukraine saga took several new turns in the thick of Senate impeachment proceedings on Friday, as reports surfaced of a private recording of President Trump venting about his since-ousted Ukraine ambassador, and Trump attorney Rudy Giuliani made a litany of accusations about the Biden family’s dealings in the country.

Giuliani on “Fox & Friends” Friday teased that he would reveal evidence of “shocking new crimes” in the coming weeks related to the controversy.

“I’m going to present over the next two to three weeks shocking crimes at the highest levels of government while the Senate is listening to a totally phony group of stories about non-impeachable offenses,” Giuliani said.

Giuliani made several claims about supposed bribes concerning the Bidens during the interview on Friday morning. Giuliani for months has focused on the circumstances surrounding Hunter Biden's past board position with Ukrainian natural gas firm Burisma Holdings and his father Joe Biden's role in ousting a prosecutor who had been looking into the firm's founder.

The issue is what President Trump pressed Ukraine's newly elected leader to investigate last year, touching off the chain of events that would lead to his impeachment.

“You know, I started investigating Biden two years ago when he was thinking about running for president, I’d never think he’d run,” Giuliani said. “I wasn’t investigating Biden, but in the middle of the corruption presentation, one gentleman said to me, well you know about the Biden bribe, and I said what are you talking about? And he said, well, 'Biden, Biden got paid off, and he went, he forced a prosecutor out, not only did he get his son out, he got Burisma out.'”

Giuliani went on to mention the head of Burisma, Mykola Zlochevsky, claiming he hired Hunter Biden for a lucrative position on the board of the company in an effort to buy protection from then-vice president Joe Biden.

“He hires the son of the vice president who just got thrown out of the Navy for failing a drug test, had been in and out of rehab for most of his life, was a failure in business and was involved in two or three other scandals involving his father before,” Giuliani said of the younger Biden. “Why would he hire this guy? I’ll tell you why -- he was buying Joe Biden to protect his company... to buy Joe Biden’s protection for if and when [former Ukrainian president Petro] Poroshenko came after his company.”

Zlochevsky was under investigation by Ukraine’s now-ex-prosecutor general Viktor Shokin. The former vice president successfully pushed for Shokin’s removal due to apparent corruption concerns, though the probe into Burisma was dormant at the time of Joe Biden’s intervention.

It is unclear exactly what Giuliani was referring to.

Meanwhile, he teased on Twitter early Friday that he would give “some new evidence about the extent of Dem corruption.”

He later posted this video:

Meanwhile, as impeachment proceedings moved into their fourth day, ABC reported that they uncovered a recording that appeared to capture the president telling his associates he wanted then-U.S. Ambassador to Ukraine Marie Yovanovitch fired. ABC reported that Trump made the remark at a small gathering in April 2018 at Trump International Hotel in Washington that included Giuliani's ex-business associates Lev Parnas and Igor Fruman -- both of whom have been indicted in New York.

The Trump administration seemed to downplay the significance of the tape.

“Every president in our history has had the right to place people who support his agenda and his policies within his administration,” White House Press Secretary Stephanie Grisham said in a statement to Fox News on Friday.

Asked about the report, Trump told "The Ingraham Angle's" Raymond Arroyo that he was not relying on Parnas to get rid of Yovanovitch while acknowledging: "I am not a fan of that ambassador."

"I want ambassadors that are chosen by me. I have a right to hire and fire ambassadors," Trump said.

Vice President Pence also weighed in, saying that he has not heard the tape but that “all of the ambassadors who serve, serve at the pleasure of the U.S.”

“I don’t think the president made any secrets that he had concerns about the ambassador to Ukraine and wanted her replaced,” Pence told reporters. “But the tape that has been released today would only confirm what people already know -- the president had concerns and made a decision.”

Yovanovitch, a career diplomat, was recalled by the president from her post in May 2019 and testified as part of the House impeachment inquiry that she believes Giuliani played a key role in telling people she was not sufficiently supportive of the president.

Yovanovitch’s ouster was one of several events that became central to the House inquiry, as Democrats worked to connect her firing to Trump’s alleged pressure campaign to enlist Ukrainian President Volodymyr Zelensky to investigate the Bidens and their business dealings in Ukraine.

Meanwhile, the new allegations and apparent evidence come amid the Senate’s fourth day of its impeachment trial against the president. Democrats on Friday continued their opening statements and turned to the “obstruction of Congress” allegation against Trump, the second of two articles of impeachment adopted by the House last year.

Earlier this week, Democratic House managers presented their case for the first article, abuse of power.