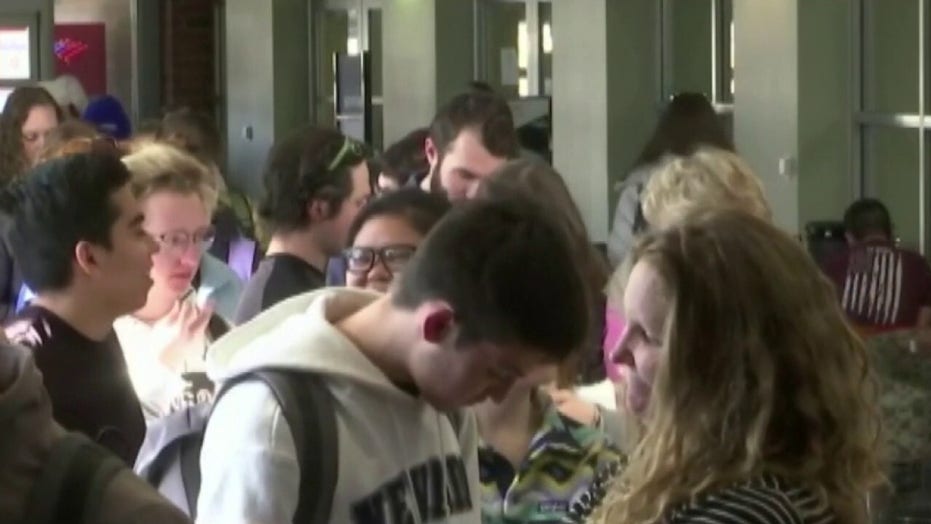 LAS VEGAS – The Nevada caucuses will be under nationwide scrutiny as Democrats in the Silver State head to caucus precincts on Saturday to weigh in on the race for the Democratic presidential nomination.

In the wake of the reporting debacle three weeks ago at the Iowa caucuses due to a technical glitch, Nevada Democrats scrambled to avoid a repeat -- quickly dropping an app made by the same developer that created the one used in Iowa.

Further, Nevada Democrats made a last-minute move on the eve of the caucuses to drop the use of a Google application to transmit the results from the precincts to party officials.

The Democratic National Committee’s been in Nevada all week to assist the state party in training volunteers on calculating and reporting the results. DNC Chairman Tom Perez cautioned earlier this week that results may not be released by the end of Saturday. But the state party insists they’ll report results on caucus day.

Some of the candidates are expressing concerns.

Speaking to reporters on Friday while campaigning in Las Vegas, Sen. Elizabeth Warren of Massachusetts said, “I think everyone is concerned, and wants to see things go well tomorrow. And I very much hope that there aren't any technical glitches, that everyone can get out and caucus and get their caucus votes counted.”

As with Iowa, the caucuses in Nevada are run by the state parties – which is very different than last week’s primary election in New Hampshire, which is administered by the state.

All registered Nevada voters can take part in the caucuses. A voter must be at least 18 years by the time of the Nov. 3 general election to vote.

The state party does require that everyone who caucuses be a registered Democrat. But voters can register at their local precincts before entering the caucus room.

Nevada has 36 delegates up for grabs in a process that begins with Saturday’s caucuses. A presidential candidate needs 1,991 delegates to formally win the Democratic Party’s presidential nomination at this summer’s convention in Milwaukee, Wis.

For the first time, Nevada held early voting, from last Saturday through Tuesday. Roughly 75,000 people cast ballots, which was nearly as many people who took part in the state's entire 2016 Democratic caucuses.

But since this is a caucus, the ballot was far from simple. Voters were given ballots to rank their choice of candidates. The early-voting ballots will be married with those of caucus-goers on Saturday – in both the first round and the realignment.

This has never been done before in Nevada and has some volunteers concerned about how smoothly the process will occur.

At a training session on Friday at Silverado High School in Las Vegas, caucus volunteer Tom Harrison of nearby Henderson told Fox News he showed up because "I'd just like to get as much training as I can because I think the spotlight's going to be a little hot."

Another volunteer, Wendy Linow of Henderson, raised concerns about adding the early votes into the mix, but was confident an Iowa-style meltdown "is not going to happen here."

The Google Forms app will still be used to count the raw vote totals and delegates won by the candidates -- along with a paper backup. But the party decided on Friday to scrap using the Google Forms app to transmit the data to the party's headquarters.

The caucus precinct chairs will now report the results by dialing a hotline and providing a secret passcode. Then the chairs are required to text a photo of their reporting sheet to Nevada Democratic Party officials -- and finally hand in a physical copy of the reporting sheet.

How appropriate for Nevada.

In the rare case of a tie between candidates at a caucus precinct site, state party rules dictate that the draw of a card will serve as the tie breaker.

Here’s the rule:  When awarding delegates, a presidential preference group with caucus math results of 0.5 and above is rounded up. Similarly, a preference group with results below 0.5 is rounded down. In some precincts on Caucus Day, a normal rounding of the precinct delegate counts will result in more delegates than the precinct is entitled to award. If there are two or more groups that have the same lowest or highest decimal as a result of the caucus math, a game of chance will decide which group(s) lose or gain the delegate(s).