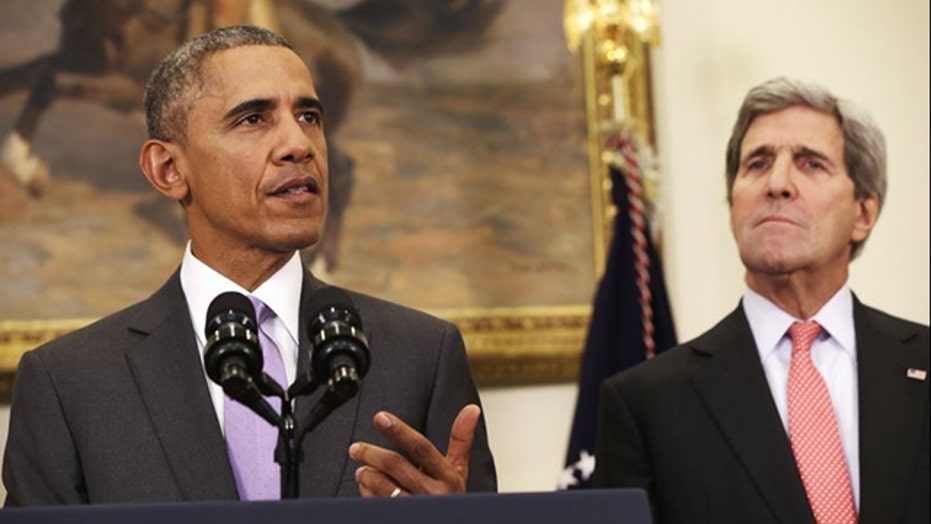 The U.S. and international negotiators announced the hard-fought framework for an Iranian nuclear deal Thursday, capping days of exhaustive and tense talks that blew past their original deadline.

The plan, containing dozens of provisions, would effectively require Iran to wind down or suspend parts of its nuclear program that could be used for nuclear weapon development in exchange for sweeping sanctions relief. The preliminary agreement allows all sides -- the U.S., Iran and five other world powers -- to continue working toward a final deal by a June 30 deadline.

Speaking in the Rose Garden shortly after negotiators unveiled the plan in Switzerland, President Obama called the agreement a "historic understanding."

The announcement follows days of talks that went into overtime after missing a March 31 deadline, raising doubts on whether the negotiators could reach any agreement at all. Even with the framework, negotiators have weeks of talks ahead of them. And critics were likely to oppose the "plan of action" because of concessions allowing Iran to maintain significant elements of a program that could, someday, be used to produce either energy or nuclear arms. Most immediately, Obama will face pressure from congressional skeptics concerned about the direction of talks and seeking a vote on Capitol Hill.

Sen. Bob Corker, R-Tenn., chairman of the Senate Foreign Relations Committee reiterated Thursday that his panel would take up a bill later this month requiring congressional review of any deal.

"If a final agreement is reached, the American people, through their elected representatives, must have the opportunity to weigh in to ensure the deal truly can eliminate the threat of Iran's nuclear program and hold the regime accountable," Corker said in a statement.

But Obama urged Congress to give the agreement a chance, and stressed that negotiations are not over yet. He claimed the framework, if fully implemented, would prevent Iran from getting a nuclear weapon.

"This framework would cut off every pathway Iran could take to obtain a nuclear weapon," he said.

A fact-sheet accompanying the announcement outlined dozens of key "parameters" the negotiators had agreed to. Among them, Iran agreed to cut its installed centrifuges by two-thirds, from 19,000 today to 6,104 -- with just over 5,000 of them enriching uranium for 10 years.

According to the document, Iran agreed not to enrich uranium at its contentious Fordo facility for at least 15 years, and would not build any new facilities for enrichment for the same time period. The framework would allow international inspectors to have "regular access" to nuclear sites. In exchange, U.S. and European Union sanctions would be suspended after inspectors verify Iran "has taken all of its key nuclear-related steps." Sanctions, the document said, would "snap back" if Iran breaches the commitments.

"If Iran cheats, the world will know it," Obama said. He said the "vast majority" of Iran's enriched uranium stockpile would be "neutralized." Further, negotiators said the "breakout time" -- or the time it would take for Iran to get enough material for one weapon -- would extend from two to three months, to a year.

"Our work is not yet done," Obama stressed.

Secretary of State John Kerry, earlier, tweeted that all sides would soon get back to work on a "final deal." "Big day," he tweeted.

But Israeli officials, who long have voiced concerns about the discussions, on Thursday continued to warn about a "bad agreement." Israel's intelligence minister said the deal was "disconnected from the sad reality" of the region.

Reading out a joint statement, European Union foreign policy chief Federica Mogherini said the seven nations in the talks would now start writing the text of a final accord. Mogherini cited several agreed-upon restrictions on Iran's enrichment of uranium, a core concern because the material can be used in a nuclear warhead. She said a planned heavy water reactor in Iran wouldn't produce weapons-grade plutonium and work at the deeply buried underground facility at Fordo wouldn't involve uranium.

Iranian President Hassan Rouhani also tweeted that they found "solutions" on key issues and would start "immediately" on drafting a deal to finish by the June 30 deadline.

In the search for a comprehensive deal, the U.S. and five other countries hope to curb Iran's nuclear technologies that it could use to make weapons. Tehran denies such ambitions but is negotiating because it wants a lifting of sanctions imposed over its nuclear program.

The talks have been on shaky ground in recent days, with U.S. lawmakers worried Iran was making unreasonable demands and some even urging the U.S. delegation to "walk away" from the negotiating table.

Even the White House had warned that they were prepared to do so if Iran did not start negotiating in good faith.